Sabinus of Assisi , also Sabinus of Spoleto (* in the 3rd century in Italy; † 303 in Spoleto ), was bishop of a parish in Assisi , was arrested there in 303, executed on December 7th in Spoleto and on December 10th two Buried miles before the city of Spoleto. His feast day is December 7th. The martyr is commemorated on July 7th, December 1st and 30th. His first name is derived from the Sabine people . He is the patron saint of the cities of Assisi, Faenza , Fermo , Siena and Spoleto. 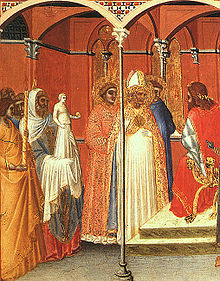 Bishop Sabinus before the Prefect Venustian

Nothing is known about his life before martyrdom , except that he was bishop of a Christian community in Assisi at risk of persecution. In 303 the emperors Diocletian and Maximian ruled . Diocletian issued an edict of persecution in 303, which triggered the last and most brutal wave of Roman persecution of Christians . Venustian, Prefect of Tuscany and Umbria , had Sabinus and the two deacons Marcellus and Exsuperantius as well as other clergy arrested in Assisi.

In the court hearing the next day, Sabinus fought a quick battle of words during the interrogation by Venustian, so that the prefect finally presented him with the choice of sacrificing to the Roman gods or to die in agony. Sabinus replied that he wanted to be killed and die like his Lord Jesus Christ, so that he might rise again like him. Then he offered the prefect to show him how meaningless the Roman gods are. He took a small statue of Jupiter and hurled it on the ground with such force that it splintered into pieces. The prefect, filled with fear and terror, had both hands cut off for his sacrilege. Then he tortured the deacons Marcellus and Exsuperantius until they died in agony invoking Christ.

The condemnation of Sabinus was postponed. In the dungeon he was visited and fed by the elderly and pious widow Serena. Her grandson Priscianus was blind but was cured by Sabinus. Venustian also suffered from severe eye pain and therefore had Sabinus called to him and asked him for medicines for his body and soul. After a few days of teaching the Christian faith, the bishop gave him baptism with mutilated hands. Immediately relieved of his pain, the prefect also had his wife and two sons baptized. When the Emperor Maximian heard of this, he sent the Tribune Lucius to Assisi to behead the prefect and his family. He then brought Sabinus to Spoleto for trial. He had him flagellated until he passed away. The widow Serena had him buried two miles from town. As a result, his remains were brought to Faenza.

Sabinus was soon highly revered. His worship is well attested in the church, which was built in the 5th century on the traditional site of his grave in front of the city of Spoleto. His grave was an important place of pilgrimage, he was one of the most popular saints in central Italy. He is depicted on mosaics in Ravenna from the beginning of the 6th century. In the Middle Ages relics were transferred to numerous cities in central Italy that boast of being a bishop or hermit. B. Assisi or Fermo, which preserves the tradition of having received the relics of Pope Gregory the Great , which can be inferred from a letter he wrote to the then Bishop of Fermo. Relics from Sabinus also came to the Windberg Monastery near Straubing in Bavaria in 1191 .

There are only a few churches in Germany with the Sabinus patronage : Among others, the Sabinenkirche in Prenzlau , first mentioned in a document in 1250 as St. Sabini, and the monastery church in Windberg, which is dedicated to St. Maria and St. Sabinus (construction started around 1140). .

Pastor and local history researcher Julius Boehmer has investigated the reason for the patronage of the Sabinenkirche in Prenzlau. Since the Sabinenkirche belonged to the diocese of Cammin in the Middle Ages , he asked the question: "How was the veneration of Saint Sabinus in the medieval diocese of Cammin?" He therefore has all the traditional medieval liturgical documents (four missals and six breviary ) of the diocese of Cammin, which also includes Prenzlau and the Grobe monastery (also with veneration of Sabinus). In these documents, Sabinus is referred to as a martyr. He therefore closes his investigation on p. 30 with the sentence: “Therefore the name of the Church of Saint Sabines, named after Saint Sabinus of Assisi, bishop and martyr, must and should be named Sabinen for all in the same form Preserve the future. "

The Prenzlau tradition states that the only reason why the Sabinenkirche was the only church in Germany to be dedicated to a relatively unknown Sabinus is that Sabinus is the patron saint against floods, because the oldest settlement in Prenzlaus around the Sabinenkirche at the outflow of the Ucker from the Unteruckersee was at risk of flooding in In contrast to Assisi and Spoleto in their striking altitude. However, this patron saint against floods is Saint Sabinus of Piacenza , who, however, was not a martyr. Boehmer did not deal with this contradiction. However, he made it clear that the Sabine Church is not about Saint Sabine.