The title of this article is ambiguous. Further meanings are listed under Martyrs (disambiguation) .

Martyrdom is a redirect to this article. Further meanings are listed under Martyrdom (disambiguation) .

Martyrs , even martyrs (of ancient Greek μάρτυς Marty , German , witness ' or μαρτύριον Martyrion , German , testimony' ; feminine shapes martyr or martyr and martyr or martyr ), are people who to the confession of their faith suffer sake and for the To endure death.

The German transfer of martyrdom has been naturalized since the 17th century. It shows the difference to so-called confessors ( Latin confessores ) who suffered bloodless persecution such as imprisonment and exile for their Christian creed.

Origin of the term martyr

What is certain is that in the writings of the New Testament martys always refers to the word or faith witness who testifies of faith in Jesus Christ . People who were persecuted for their faith or who died for it are not yet referred to as martyrs in the New Testament, even if what is later described by the term martyr or martyrdom is already reported in the New Testament (e.g. at the death of Stephen , Acts 7.54-60  EU ).

In order to explain how this event comes to be called martyrdom, one considers different influences:

While in the 2nd century martyrdom in the martyrdom of Polycarp was designated by the term martyrdom, the Ignatians (cf. Ignatius of Antioch † 107–110; the dating of the letters handed down under his name are between 100 and 170) developed a theology of Martyrdom: the death of the martyr corresponds to the suffering and death of Christ . Through death the martyr becomes a disciple of Jesus; in death he acquires perfection and resurrection with Jesus Christ. Polycarp cites the crucifixion of Christ as a testimony against the heresy of docetism . This could explain how the concept of martyrs came about.

The martyr's death was called "baptism of blood"; it was to replace baptism , if it had not yet taken place, and immediately lead to bliss .

Martyrs of the first Christian centuries 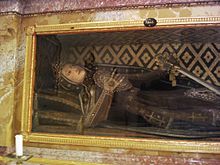 The first Christian martyr, the protomartyr or arch martyr, was Stephen , who was stoned to death for his belief ( Acts 7.54–60  EU ). His murder was the signal for a great persecution of Christians in Jerusalem, in which Saul was particularly zealous.

Of the numerous Martyrdoms early Christian martyrs (. Eg Thekla of Iconium , Polykarp , Mauritius , Perpetua and Felicitas , Martyrs of Scili , Cyprian , Maximilianus , Marcellus ) are martyrs reports handed or literary edited files of the process. For the first few centuries these are often valuable historical sources; the later reports of martyrs ( Gesta Martyrum ) , which have been written since the 4th century, are largely legendary. Many martyrs' writings from the 4th century onwards were created in the aristocratic milieu and are to be understood as motivational writings for aristocratic virginity and chastity.

In Egypt, Christian martyrdom played a prominent role in faith, a tradition that has been preserved to this day. For example, at the grave of the soldier Menas, who refused to worship the Roman emperor as a god, the Menas city became the largest pilgrimage center of early Christianity. It was rediscovered by the German archaeologist Carl Maria Kaufmann in 1905. An outstanding cultic complex was created which, in addition to the martyrs' tomb accessible by pilgrims, even has a complex that was used for the healing sleep going back to the ancient Egyptian temple sleep. This veneration of people who died for their Christian faith is still alive today in the Coptic Church.

As a result of the Reformation , Christians were increasingly killed because of their beliefs. The Evangelical Name Calendar lists many of them. In the following, some examples of evangelical martyrs are listed in chronological order according to the date of their death.

Cremation of Protestant Christians, including Antonio Herrezuelo, on May 21, 1559 in Valladolid

Martyrs of the Anabaptist Movement

Around 1000 historically recorded Anabaptists , referred to by their opponents as Anabaptists or Anabaptists , lost their lives in the 16th and 17th centuries because of their religious convictions. One of the first martyrs of the Anabaptist movement is Felix Manz , who was drowned on January 5, 1527 in the Limmat near Zurich . Other well-known martyrs were Balthasar Hubmaier , Jörg Blaurock and Michael Sattler . The Mennonite Martyrs Mirror lists around 800 Anabaptist martyrs by name. The history book of the Hutterite Brothers describes many individual fates of Anabaptist martyrs on around 670 pages. Anabaptist research assumes that the documented number of victims must be at least doubled. But even that does not describe the full extent of the persecution. Anabaptists were deprived of their property, expelled from the country, and sold into slavery . Only a few sovereigns granted the Anabaptists - often only temporarily - protection. The Roman Catholic Church , the Lutheran and Reformed clergy were equally involved in the persecution .

Martyrs of the 20th century

At the suggestion of Pope John Paul II , the Roman Catholic Church had documentation about Christian martyrdoms of the 20th century created in several countries from 1995, so that their testimony would not be forgotten. In 2000, the papal commission for new martyrs registered 12,692 martyrs of the 20th century (2351 lay people, 5343 diocesan priests or seminarians, 4872 religious and 126 bishops) on the basis of the reports received. In 1999 the first edition of the German Martyrology of the 20th Century was published . Century , 2019 the seventh updated and revised edition. The German Martyrology records the life pictures of more than 900 Roman Catholic witnesses of faith. More than 160 experts contributed to its creation.

The martyr was commemorated in the Holy Year 2000 in an ecumenical service in the Colosseum in Rome chaired by the Pope. At the request of John Paul II, the Basilica of San Bartolomeo all'Isola in Rome became the permanent memorial of the new martyrs. The icon of the new martyrs exhibited there shows some representative martyrs of the 20th century, including Paul Schneider and Maximilian Kolbe . Thirty-eight martyrs from Albania who perished as persecuted by the communist system were beatified in Shkodra on November 5, 2016 .

In March 2006 the Evangelical Church in Germany (EKD) presented the results of a research project on martyrdoms of the 20th century. The publication on this project presents theological and historical aspects of the topic and contains a documentation of 499 individual fates from the area of ​​German-speaking Protestant Christianity.

Members of the Bible Students' Movement , especially Jehovah's Witnesses , also suffered martyrdom during the Nazi era . According to Johannes Hartlapp, they represent "by far the largest group of religious martyrs during the National Socialist era", not including the murdered Jews.

Today too, Christians suffer martyrdom in many countries for their faith. The evangelical missionary organization Open Doors estimates that around 260 million Christians are “exposed to high to extreme levels of persecution”.

The Islam knows the term Shahid ( Sahid , pl. Šuhadā' ). It is derived from the root šahada ' to testify' , ' to bear witness', 'to testify', and has the same basic meaning of 'witness', 'martyr' as the Greek word from which the term martyr is derived. The term Shahada , which denotes the Islamic creed, is also related to it.

According to Islamic jurisprudence ( Fiqh ) there are three categories of martyrs:

There are special burial rites for martyrs in Islam. The martyr's body must not be washed and is buried with his clothes and in his blood, since he is considered pure by his death (he is also spared the Barzach death phase , so that he goes straight to paradise after his death ). This determination is based on a tradition that goes back to the time of the Prophet Mohammed . At the Battle of Uhud , he is said to have buried the fallen fighters in the place where they fell without washing their bodies. However, the weapons must be removed from the martyr at the funeral.

From the perspective of Bahaitums martyrdom means "life on the path of God indulging when circumstances require" Martyrdom is considered a great favor when he meets a no fault. Baha'i believe that the deaths of godly martyrs release spiritual powers that help develop their faith. The devout Baha'i must not provoke martyrdom, but should submit to his godly destiny. Such of some Bahai authors, natural martyrs '( natural martyrs ) called (as Stephen , Hamza or Sulayman Kh án) - in contrast to the self-imposed' ( self-imposed martyrs ) that provoke their killing.

Baha'ullah has exhorted his followers not to seek martyrdom. According to his command, the believers should live to teach the faith; he equates God's reward for teaching with the reward for martyrdom. This is why European believers from the early days of the faith, such as Keith Ransom Kehler or the German Adam Benke, are referred to as "martyrs" because of their self-sacrificing way of life. Here there are points of contact with Gregory the Great , who in his homilies on the Gospels describes the example of faith, e. B. the love of one's enemy, referred to as “the martyrdom hidden deep in the heart” and contrasts it with the martyrdom “in public”.

According to the Baha'i scriptures, the number of martyrs is about 20,000 Babi and Baha'i, especially at the beginning of the movement. The best known are Badi ' , Ruhulláh, Varqá, Quddus, Mullah Husayn and last but not least the Bab and, as a more recent example, Mona Mahmudnizhad .

The suffering of the manifestations of God as martyrs plays a special role , because despite resistance from people they proclaim the faith of God, suffered martyrdom for it and, through their martyrdom, ensured the continued existence of the world. Jesus and the Bab are mentioned as outstanding examples .