Part of a votive panel with 16 legendary scenes and saints, Gregor d. Large, Franconia, around 1500, Germanisches Nationalmuseum in Nuremberg. 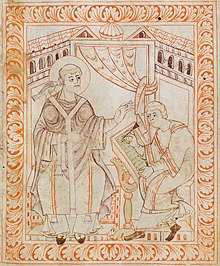 Gregor probably came from the urban Roman patrician family of the Anicier , who had two of the last Western Roman emperors in the 5th century and of course also belonged to the upper class in Eastern Rome and Constantinople . Gregory was a great-grandson of Pope Felix II (III) († 492). Gregor's father, Gordianus, was a high official in the city of Rome, and Gregor, too, initially followed the family tradition and after a thorough rhetorical and legal training initially pursued a secular career as a politician.

After his tenure (probably) as Praefectus urbi of Rome - the highest office that a senator could still hold in what is now Italy - he decided in 575 to live as a monk ; perhaps not least due to a lack of prospects for a further secular career in imperial service. The Western Roman Senate had been in dissolution since the Gothic War (535–552). He converted his parents' villa on Monte Celio into a Benedictine monastery , the monastery of Santi Andrea e Gregorio al Monte Celio still exists today. His predecessor as Pope, Pelagius II , brought him into church service in 579 and sent him to Constantinople as apocrisy , where he stayed for six years and had to struggle with communication difficulties because of poor knowledge of Greek. After his return, Gregory was elected advisor to Pelagius II and himself was elected Pope on September 3, 590 - the first monk of the Latin Church to be elected Bishop of Rome and thus Patriarch .

Territorial situation in the year 527 AD, when Justinian I took office , in the Eastern and Western Roman Empire

The Roman Empire at Justinian's death in 565 AD

Gregory I (second from right) with Benedict of Nursia , Lawrence of Rome and John the Baptist in a picture by Andrea Mantegna (1459)

Since the wars of reconquest under Justinian I , the city of Rome was at least nominally under the rule of the Eastern Roman emperor. Gregory was not looking for a conflict with Emperor Maurikios (582–602), whose main focus was on defending the empire on the Euphrates and Danube ; but he risked its disfavor when he arbitrarily negotiated a partial withdrawal by the Lombards in 593 and accepted their demand for an annual tribute of 500 gold pounds. He exchanged letters with the Lombard queen Theudelinde and made her valuable gifts, including the Gregorian cross .

There were also disputes with the Patriarch of Constantinople Johannes Nesteutes about the title of “ecumenical patriarch” . Gregory was aware of the claim that Innocent I had already made of Rome's supremacy in the universal Church, without having forced it unconditionally.

Regarding the still numerous non-Christians, Gregor was generally extremely intolerant ; so in the year 599 he gave orders to force the pagans of Sardinia to convert to Christianity:

“If you find that they are unwilling to change their behavior, we command that you pursue them with the greatest zeal. If they are not free, they punish them with beatings and torture in order to force them to reform. But if they are free men, they should be brought to the insight by the strictest imprisonment, how it is appropriate, so that those who refuse to hear the wholesome words, which can save them from the dangers of death, through physical agony of the desired mental health. "

A few decades earlier, Theodoric the Great had stated that it was impossible to order the acceptance of a religion ( Religionem imperare non possumus , Cass. Var. 2.27), Gregory's advocacy of violent conversion was to point the way for the Western European Middle Ages. His decision to send missionaries to Britain was also historically significant , with which he brought about the conversion of the Anglo-Saxon king Æthelberht of Kent to Christianity. This laid the foundation for a new overall Western church consciousness, with the Roman papacy at the head.

As "Monk Pope" called himself Gregory " servant of the servants of God " ( Servant of the servants of God ), which remains to this day part of the papal titulature. He was so impressed by the monastic rule of Benedict of Nursia that he declared it to be binding for the entire church and himself followed the Benedictine lifestyle. According to some of today's researchers, however, it was Gregor himself who formulated the rule, or one of his students. In his funerary inscription he is also referred to as consul Dei , ie "God's consul". Welfare became an important element of his pontificate . The grain supply of the city of Rome, which at that time still had about tens of thousands of inhabitants and which was actually incumbent on the emperor, was inadequate, which is why Gregory reorganized and cultivated the huge lands of the church in southern Italy and Sicily . At the beginning of each month there was a general distribution of food. Gregory also warned the other bishops that the person in need would only be receptive to the sermon if he had been given a "helping hand" beforehand. He viewed alms as a sacrifice made to God that ultimately brings about grace in God's judgment.

Gregory wrote down the term Pope as the exclusive official title for the Bishop of Rome. With him the papacy moved from late antiquity to the Middle Ages . 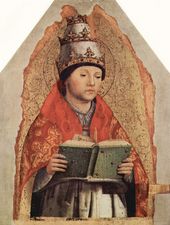 Through his numerous writings, Gregory achieved great importance in the Catholic Church for centuries. In addition, he is one of the very few western saints that enjoys a lot of attention and veneration in the Orthodox Church. Numerous legends grew up around Gregory early on. Among other things, the pope's aristocratic parentage was soon forgotten, and early on it was said that Gregory was a poor, unknown hermit and a former sinner who, on the basis of divine inspiration, had been made pope in absentia. Centuries later, Hartmann von Aue formed his work Gregorius from the legends , which in turn formed the basis for Thomas Mann's novel The Chosen One .

Although neither the Gregorian Sacramentary nor the Gregorian Chant are his creations, in the Middle Ages he was granted their authorship to give them additional authority.

In the Byzantine liturgy , the form of the presanctification liturgy bears the name of the Roman Pope Gregorios Dialogos.

The canonization took place in 1295 by Pope Boniface VIII. His attributes are the tiara , book, dove, serving arms. He is the patron of the church school system, the mines, choir and choral singing, scholars, teachers, pupils, students, singers, musicians, bricklayers, button makers; against gout and plague .

Various churches bear his name. The monastery of St. Gregory in Munster was dedicated to him. 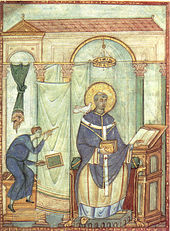 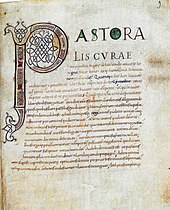 Gregor's style is less literary than that of the other Church Fathers, his language is closer to the spoken word and consciously avoids the ornaments and educated reminiscences of an elite educated in Greek and Classical Latin, such as Augustine and Jerome could have assumed. The simplicity of his style is not only an expression of the changed educational conditions of his time, but also a conscious decision for a "humble style" ( stilus humilis ) that focuses on the truth of the Gospel and distrusts the artistic form as an expression of world wisdom, however He knows how to combine simplicity of expression with strength of feeling and the gesture of passionate conviction. This style contributed significantly to the success and popularity of his works in the Middle Ages and their influence on popular piety: his exegetical writings were among the most extensively excerpted, his Dialogi among the most widely read works in the Middle Ages.

Ivory panel: Gregory the Great inspired by the dove of the Holy Spirit , including his tachygraph , Vienna , Kunsthistorisches Museum , 10th century

In the Homiliarum In Evangelia Libri Duo , Gregory I declares in an interpretation ( Luke 7 : 36-50  EU ) where an anonymous sinner washes and anointed Jesus' feet and the text of Luke does not say a word about her actual offense (according to John 12 : 3  EU Mary of Bethany ; see also Matthew 26.6-7  EU ; Mark 14.3  EU ) that this person is identical to the woman, of whom Mark assures that seven demons were cast out for her and that she was ultimately Mary Magdalene ( Mark 16.9  EU , Luke 8.2  EU ) and at the same time claims that she was a former prostitute. As Pope, he confirms an equation already expressed in a commentary by Ephrem the Syrian in 373 , and so subsequently became the witness of the resurrection ( Mark 16.6  EU ) and also of the crucifixion, which remained with the death of Jesus and his burial ( Matthäus 27,55-56  EU , Matthäus 27,55-56  EU , Matthäus 27,61  EU , John 20,11  EU ), an exemplary sinner in the sexual area. With the same oil with which she once tended her sinful body, she now anoints the feet of Jesus. Only through Pope John Paul II and later Francis is this equation dissolved and the special role of Mary Magdalene as the first witness to the resurrection of Jesus and first messenger to the preaching of the resurrection to the apostles is emphasized again.

Controversy about the authenticity of the Dialogi

In 1987 the theologian Francis Clark submitted a two-volume study of the Dialogi in which he hypothesized that the work was spurious. The author is not Gregory the Great, but a forger operating under the name of the Pope who lived in the late 7th century. Some of Clark's considerations met with cautious approval from Johannes Fried , who, however, stated in 2004: Clark has overshot his target ; the Dialogi had originated in his environment during Gregor's lifetime; it was literary dialogues that Gregor actually had . However, the credibility of the information regarding the life of Benedict is doubtful.

Clark's hypothesis, which he defended in a further study in 2003, has been almost unanimously rejected in research; it has been considered to have failed since it turned out that his work apparently had serious methodological flaws. Fried's assumption that Benedict might be an invented figure did not prevail either. According to the current state of research, the authenticity of the Dialogi can be assumed; How much the historical Benedict has to do with the Dialogi remains controversial.