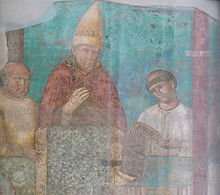 Boniface, tomb statue by Arnolfo di Cambio , today in the Museo dell'Opera del Duomo in Florence. It is likely to be the first statue of a Pope with portrait-like features. Although ageless, the figure shows the Pope around 30 - at Jesus' age when he died on the cross.

Benedetto Caetani was born around 1235 in Anagni (Lazio), 60 km south-east of Rome. He was the nephew of Alexander IV on his mother's side , who appointed him canon at Todi Cathedral in 1260. In 1264 he accompanied the papal legate Simon de Brie , later Pope Martin IV, to Paris as secretary . As a companion of the cardinal legate in England, Ottobono Fieschi , Caetani fell into captivity a few years later and was freed by the later King Edward I. In 1276 he stayed again in France in order to supervise the income of the church tithe on papal orders .

In 1281 he was promoted cardinal deacon with the titular church of San Nicola , in 1291 by Pope Nicholas IV. To cardinal priest of the titular church Santi Silvestro e Martino ai Monti and finally in 1294 he was the main advisor to the monk-pope Celestine V, elected after a long conclave .

The already aged Celestine had a reputation for holiness, but soon found himself overwhelmed by the tension between influential noble families and came under pressure from Charles II of Naples , the son of Charles of Anjou . The cardinal therefore advised him to abdicate as soon as possible , which Celestine still regulated by a specially enacted constitution. Caetani was considered his logical successor, and the conclave elected him after a brief consultation on December 24, 1294. He moved the papal seat from Naples back to Rome and was crowned in St. Peter's Basilica on January 23, 1295 . Until the death of his predecessor in 1296, however, he had Celestine held in honor for fear of a schism . His opponents, including the Franciscans and the cardinals from the Ghibelline house of Colonna , did not recognize the resignation of Coelestin and the legitimacy of the election.

Boniface was notorious for his pride. He introduced the second crown circlet into the tiara . He found an opponent who was as haughty as he was unscrupulous in the French King Philip the Fair .

Although he was initially dependent on the French ruling in southern Italy from the House of Anjou, Caetani soon developed into one of the most powerful popes.

The dispute over the Kingdom of Sicily , which was characterized by the dispute between the papacy and the Staufers until the Battle of Benevento in 1266 , continued. In the place of the Hohenstaufen, however, two new powers had emerged, France and Aragon . Their troops faced each other not only in the Pyrenees , but also in Italy, where the Aragonese had occupied Sicily. The Anjou family , a branch of the French royal family, ruled the mainland south of the Papal States from Naples . The Pope claimed feudal sovereignty over Sicily and tried to consolidate his political power through treaties.

King James I of Sicily succeeded his brother Alfonso III as James II in 1291 . as King of Aragon. His younger brother Friedrich became governor for Sicily . Like all sons of the Aragonese King Peter III. and his wife Konstanze, a grandson of Manfred , the last Hohenstaufen king of Sicily. In the Peace of Anagni on June 20, 1295, Boniface VIII succeeded in convincing Jacob II to give up Sicily by making concessions on other issues. Jacob officially followed the line of the Pope and Charles II of Naples by ceding Sicily to the Pope. Boniface VIII was anxious to transfer Sicily to Charles II. The people of Sicily, however, clearly spoke out in favor of Frederick as king. The Pope did not notice that for the Sicilians the papal feudal law, which could hardly be enforced during the entire 13th century, played a smaller role than the king residing in Palermo or his governor. By transferring the Byzantine imperial crown, Frederick was to be moved to renounce Sicily. But because the Pope had neither the right nor the power to award this crown to anyone, Friedrich refused this exchange. He was crowned King of Sicily on March 25, 1296 and called himself Friedrich III. As the successor to Emperor Friedrich II , he consciously wanted to continue the Staufer tradition. Pope Boniface managed to turn Jacob II against his brother. In alliance with Charles II, who lived in Naples, Jacob led a campaign against his own brother. Sicily successfully resisted for six years. Finally, on August 29, 1302, the Caltabellotta Peace Treaty came about , which the Pope reluctantly signed up to. Friedrich was ready to rule Sicily as Rex Trinacriae . In return, Karl could still call himself King of Naples and Sicily. Friedrich then married Eleonore, Karl's daughter.

The Jews suffered from persecution during the time in office of Pope Boniface . Because he wanted to end the persecution of his defenseless community, Rabbi Elia de Pomis selflessly accepted all, even untenable, accusations against the community and allowed himself to be burned. He was the first victim of its kind in Italy.

Recognition of Albrecht I.

When Albrecht I became the second successor of his father Rudolf von Habsburg on June 23, 1298 after the deposition of King Adolf von Nassau in Germany , the Pope initially refused recognition and called him a "majesty criminal". Later he called him, forced by facts, the "monarch of all monarchs".

Boniface was an accomplished jurist - as his compilation of the Liber Sextus of the Codex Iuris Canonici (1298) shows. He founded the La Sapienza University in Rome . However, he did not value science without borders: For example, in 1299 he forbade the dismembering or cooking of corpses , which brought the scientific section and research into anatomy into disrepute.

In view of the masses of pilgrims pouring into Rome in 1300, he proclaimed this year a holy year ( jubilee year ) and institutionalized it through the Bull Antiquorum habet fida relatio of February 22nd, 1300 for every 100 years. He promised indulgences to all pilgrims who came to Rome that year . It also created a year of indulgence to refinance the crusades . Two million people came to Rome, so that the Pope was forced to provide a regulation for the use of the Angel's Bridge : The pilgrims had to keep left-hand traffic, so to speak.

Conflict with Philip of France and the Colonna

The taxation of the French clergy led to a clash between the Pope and King Philip IV of France . In the bull Clericis laicos , which began with the assertion that "lay people are the enemies of the clergy," the Pope made controversial claims and demands on February 25, 1296. But he had to withdraw this already on July 22, 1297 in the bull etsi de statu when he came into conflict with the Colonna cardinals Giacomo and Pietro .

They had written a manifesto declaring the abdication of Pope Celestine illegal. In two further manifestos they condemned the Pope's administration. Then the Pope began to wage a bloody war against the Colonna. He confiscated their property for his nephews and deposed the Colonna cardinals. He also had the Colonna cities of Colonna , Zagarola and above all Palestrina , the Colonna's ancestral seat, destroyed. The persecuted cardinals then fled to the French king. There was a renewed dispute between the king and the pope, which among other things led to the arrest of the papal legate in France in 1301 and culminated on November 18, 1302 in the most famous bull Unam Sanctam .

The bull is directed directly against the French king and emphasized the unconditional priority of the spiritual over the temporal power, because according to Lk 22.38  GNB there are two swords, of which the spiritual is used by the church , the secular for the church . With the two swords theory , the papacy justified its claim to unlimited power over all crowns and peoples in the world.

Politically speaking, the claims of the papacy could never be enforced. The conflict about the relationship between spiritual and secular power found a new climax in the claim of this bull, but it has permeated all of Western history since Pope Gregory VII .

Depiction of the assassination attempt by Anagni

At the instigation of the Colonna family , who were feuding with Boniface, a meeting of prelates and barons raised the most serious accusations against the Pope in Paris in June 1303 - with the aim of bringing about a general council for the removal of the Pope. When the King of France, Philip the Fair, made this his own, Boniface convened a papal consistory for September 8, 1303 . On this the excommunication of Philip IV was to be solemnly announced.

However, the day before, on September 7, 1303, there was an assassination attempt at Anagni , south of Rome. As usual in summer, Boniface stayed there in his summer residence. Philip IV is considered to be the commissioner of the attack. The king had Sciarra Colonna , whose family was persecuted by the Pope, and William of Nogaret , whose parents had fallen victim to the Inquisition, storm several cardinal palaces under the papal banner with the cry "Long live the King of France and Colonna". Under personal abuse, the Pope was asked to resign, to return the expropriated Colonna property and to hand over the church treasures to some elderly cardinals. However, the Pope did not want to abdicate . After two days, on September 9th, with the help of the citizens of Anagni, he managed to drive out the invaders in bloody skirmishes. He blessed his liberators and went back to Rome, where he arrived on September 25th but lived only one month. He died on October 11, 1303 and was born in his pompous chapel in Alt-St. Peter buried.

The tomb of Boniface VIII designed by Arnolfo di Cambio . It is now in the Vatican grottoes

The significance of the assassination is seen in part in the fact that the (not new) claims of the Pope “met with ruthless rudeness, cold scorn and irreverent acts of violence and remained victorious.” With the assassination of Anagni, “the high medieval validity of the papacy perished”.

His successor was Pope Benedict XI in 1304 . and this subsequently in 1305 Clemens V , previously Archbishop of Bordeaux. In 1306 he revoked the bull Clericis laicos and weakened the bull Unam sanctam . He moved to Avignon in 1309 , which marked the end of the period of papal hegemony in the Middle Ages.

Shortly after Boniface took office, rumors of heretical remarks were circulating. His interest in the natural sciences (including magic and alchemy in the late thirteenth century) aroused the usual suspicions. After the death of the Pope, King Philip IV of France - who also had the Templar trial staged - ensured that Clement V opened a posthumous trial against Boniface VIII for heresy in 1310. Philip's motive for this was personal hatred of his former enemy, who carried out the excommunication process against him, but the numerous testimonies collected about Boniface are partly credible, even if the greater part is demonstrably false ( e.g. the devil's pact , sexual assaults, etc.) ) and the agreement between the various reports is apparently based on agreements. It cannot be ruled out, however, that he actually excelled himself with sometimes nihilistic-hedonistic, sometimes also with critical-free-spirited statements, similar to those passed down by other people of this time. The encounter with the Orient, inevitable as a result of the Crusades, already noticeably shook the medieval harmony of the world order. Groseau's questioning of witnesses in August and September 1310 was particularly productive in this regard. Not only are the Pope's statements quoted above recorded in the minutes of this interrogation, but also other statements such as:

Even if Boniface VIII thought so, these expressions of opinion were at no time incorporated into his papal behavior. Despite these statements, trials in 1311 and 1312 remained inconclusive after witnesses were summoned again.

Prophecy to Cyril of Constantinople

In the Oraculum angelicum S. Cyrilli the message of an angel is described, which Cyril claims to have received from Constantinople . It concerns Pope Boniface VIII insofar as it relates to the political situation in Italy from 1254 to Boniface VIII.