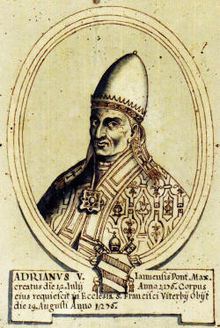 Ottobono came from the Genoese noble family Fieschi . His sister Beatrice was the second wife of Count Thomas II of Savoy , his uncle Sinibaldo Fieschi became Pope in June 1243 as Innocent IV .

Careers in the Service of the Church

His uncle Innocent IV appointed him papal chaplain in November 1243 . In the next few years he was appointed archdeacon of Reims and Parma before he became cardinal deacon of Sant'Adriano al Foro in Rome in 1252 . Even after the death of his uncle in 1254, he retained an important position in the Roman Curia . From 1262 he was archpriest of the Basilica of Santa Maria Maggiore , but never received the ordination . He was one of the negotiators who worked with Richard of Cornwall and then with his nephew Edmund and his father, the English King Henry III. , negotiated a candidacy as King of Sicily (→ Sicilian Adventure ). The connections thus created undoubtedly led to his being appointed papal legate for England on May 4, 1265 by Pope Clement IV .

As a legate, Ottobono had three main tasks: to reconcile the civil war parties of the Second War of the Barons , to reform the clergy and the work of the Church, and to promote a crusade to the Holy Land . After July 19, 1265 he left Rome and reached Paris before August 30, where he learned of the death of Simon de Montfort , leader of the aristocratic opposition, who had died fighting the royal party. On October 29th he reached England, where he initially moved into the Tower of London due to the uncertain situation . On November 1, 1265, he met King Henry III. in Canterbury .

Helping to end the civil war

Even if the war of the barons had been decided militarily by the Battle of Evesham , the vengeance of the king and his followers, who mercilessly dispossessed the defeated rebels, led to unrest and fighting in large parts of the country. Ottobono quickly realized that the dispute between the remaining rebels, the so-called disinherited , and the supporters of the king had to be settled before he could turn to his other two tasks. The day after his meeting with the King he convened a council of English clergy in London or Westminster . At the council, which took place on December 1, 1265, Ottobono declared his mandate, but also the powers he had received from the Pope for it. Therefore he suspended four bishops as supporters of the rebels and announced a general excommunication of all enemies of the king. This clear support for the king confirmed the fears of the rebels, who had reluctantly accepted his appointment due to his relationship with the Count of Savoy, who was also related to the English king.

For August 1266, during the protracted siege of Kenilworth Castle , the king convened a parliament , at which Ottobono demanded the start of negotiations with the disinherited. The king then convened a committee to work out a peace plan. Ottobono himself served as one of the two mediators who mediated disputes within the committee. After the king issued the result, the Dictum of Kenilworth , on October 30th, it was promulgated the following day by Ottobono during a council of the Church in nearby Coventry . Even though Ottobono campaigned for the king's offer of reconciliation during a parliament in Bury St Edmunds in February 1267, many of the disinherited rejected the strict rules of the Dictum and continued the fight. Thereupon the Earl of Gloucester took sides for the disinherited and occupied London in April 1267. Ottobono, who was in London at the time, did not oppose Gloucester's troops, but retired to the Tower for his safety. There he was entrusted with the crown jewels and other treasures that the king had pledged as security for his debts. Ottobono later moved to the Cistercian Abbey of Stratford Langthorne in Essex , where he met the King in May 1267. In hasty negotiations, a settlement was finally agreed between the disinherited and the king, so that the remaining disinherited could also accept the Dictum of Kenilworth. Ottobono was closely involved in the negotiations, and he agreed to a tax on the English clergy, with whose income the disinherited could be supported in order to buy back their goods. Ottobono wrote a letter to Pope Clement IV, probably in June 1267, in which he described reconciliation as God's dispensation.

Then Ottobono turned to the halting negotiations between the Welsh prince Llywelyn ap Gruffydd and the English king, which had been going on since February 1267. After four days of negotiations, he had negotiated the Treaty of Montgomery on September 25 , in which the king made far-reaching concessions to the Welsh prince. In return, he recognized the English king as his overlord. When on November 18, 1267 the statute of Marlborough finally ended the war of the barons, Ottobono had fulfilled his first commission.

Reform of the English Church

Now Ottobono could devote himself to his second task, reforming the English Church. Since Boniface of Savoy , Archbishop of Canterbury and Primate of the English Church, was still in exile, the Legate was able to assert its claim to leadership over the English clergy. No election of an abbot or bishop could take place without his consent. For April 1268 he called a three-day council at St Paul's Cathedral in London , in which all clergymen should take part or send a representative. After giving absolution to excommunicated former rebels, Ottobono issued 53 rules for clergymen. These rules were based on the rules that Legat Oddone had enacted in 1237 , but Ottobono had expanded them considerably. His rules included regulations for both secular clergy and religious clergy. For example, he forbade secular clerics to pass secular judgments or even to take part in blood justice trials. The rules forbade the clergy to have simony , cohabitation and the carrying of arms. The accumulation of offices have been set limits. Ottobono tried to improve the position of pastors, but also demanded that they live in their official residence. The bishops should also live permanently in their dioceses, and the possibility of clergymen being represented in their offices should be restricted. Other rules related to the maintenance of church buildings and the right to church asylum .

The last thirteen rules concerned the religious, the traditional rules such as meat consumption, the extent of private property and the possibility of trade by clergy. Ottobono showed that he had a profound knowledge of the monasteries. He also issued special regulations for them after visitations carried out by his representatives in the monasteries. The bishops were instructed to recite the rules verbatim at the annual diocesan synods. Ottobono's rules remained the legal basis of the Church of England until the 16th century.

As a legate, Ottobono was also responsible for Ireland and Scotland, where he never traveled. Instead, he was represented there by ambassadors. His first envoy to Scotland was through King Alexander III. received, but the king refused to receive the following ambassador. When Ottobono sent a third envoy, the king threatened him with violence. Still, Scottish bishops attended the councils convened by Ottobono. However, he showed no particular interest in Ireland and Scotland, but contented himself with the fact that bishops there advertised a crusade.

Despite his commitment to ending the civil war and reforming the clergy, Ottobono did not neglect to preach for a crusade. The Pope had decreed that the money raised in England for a crusade, enough for 500 knights, could be used by other crusaders. Due to the ongoing fighting due to the ongoing civil war, no crusaders could be won at first, so that Pope Urban IV complained about the lack of participation of English crusaders and asked Ottobono to make more efforts. After Ottobono had already preached for a crusade at Parliament in Bury St Edmunds, in London and in Lincoln , he was finally able in June or July 1268 in Northampton to persuade the heir to the throne, Lord Eduard, and numerous other barons to take a crusade vow. A little later his term of office as legate in England ended and Ottobono was able to return to Italy in the certainty that he had fulfilled his mandates.

After his return to Rome in June 1268, Fieschi quickly advanced to one of the most respected members of the Curia , who supported the House of Anjou in Italy significantly. In 1274 he took part in the Second Council of Lyon . After the death of Innocent V he belonged with eleven other cardinals to the conclave that met on July 2, 1276 in the Lateran . As Senator from Rome, Charles of Anjou oversaw the conclave and supposedly had the Italian cardinals only supplied with water and bread in order to have a French cardinal elected Pope. On July 11th, however, Ottobono Fieschi, an Italian, was elected as the new Pope.

When Pope Ottobono chose the name Hadrian V. and raised Konklaveordnung Gregory X on. It was supposed to be his only official act in writing that can still be proven today. Without having been ordained a priest or bishop or having received the papal coronation, he withdrew to Viterbo , already ill , where he died on August 18th.

Tomb in San Francesco in Viterbo

Hadrian V was buried in the Church of San Francesco in Viterbo, where a funerary monument by the Florentine sculptor Arnolfo di Cambio commemorates him. In his legacy, Hadrian V had prayers for the late English King Henry III. and his family included, he also founded a hospital dedicated to Thomas Becket in his native Liguria , which was to be open to English pilgrims in particular. In his personal possession there was a precious gemstone that came from the English royal crown.

In the 19th Canto of the Divine Comedy by Dante Alighieri , Hadrian V appears as a penitent who atones for his greed and greed and initially remains unrecognized.