A beat figure or clock figure is a movement pattern that is used by conductors to indicate the different beats of a measure by tacting . He uses up, down and sideways movements. Basically, the first, stressed beat of a bar is struck vertically , further, smaller accentuations (mostly on the half of the bar) within the bar are indicated by changing the horizontal direction of movement.

Below are a few schematic representations of the most common percussion figures from the conductor's perspective for the right hand. Although these are not binding and certainly do not reflect the way of tacting, they are so generally recognized that they can be seen as a standardized starting point. Green dots indicate the main counting times, red the secondary counting times. If two hands are used, the conductor moves his hands in mirror symmetry. However, advanced conductors often use the left hand regardless of the flapping movements of the right hand to give her clues to the musical arrangement or inserts view of musicians.

All measures in which only the beginning of the measure is marked are only displayed by moving up and down. A distinction can be made between “even” (two eighths, two quarters, etc.) and “odd” (three eighths, three quarters) bars. The latter can be provided with a rounding, so to speak "in a circle".

This includes all time signatures that have two "felt" main times, for example:

All three-part bars whose beats are so far apart that they should be marked individually. 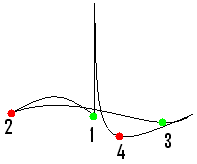 Under-emphasis on the bar half (3) indicated by a change of direction.

Since these time signatures are asymmetrical, two different figures must be used depending on the case. Which of the two applies must be decided from the context or from the score.

This measure has the longer “half” at the beginning. The sub-emphasis is on the fourth beat, which is why the direction of movement is changed here, analogous to the six-part clock: 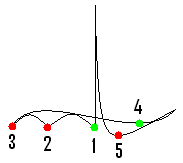 This measure has the shorter “half” at the beginning. Its under-emphasis is on the third beat, so the direction of movement changes here as well: 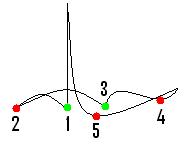 Often one encounters five-part bars in literature that are played so quickly that a division into five individual beats does not make sense. Since the resulting bar is in two parts, the corresponding beat pattern is used, with one beat being longer than the other. 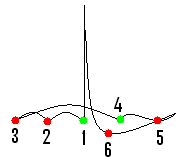 Under-emphasis on the bar half (4) indicated by a change of direction.

These bars do not have their own beat figures. Rather, they are derived from the above figures, which are subdivided as required. The advantages are unlimited expandability and clarity within the cycle through sensible grouping.

This system can be expanded indefinitely. See also time signature .