This article covers the music profession. For the film see The Conductor . 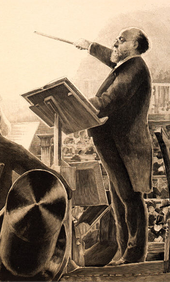 Charles Lamoureux as a conductor

The conductor (from Latin dirigere , “align”, “to lead”) directs a music- making ensemble ( choir and / or orchestra ) by conducting .

The conductor prepares the work with the orchestra or choir musicians and performs it. To this end, he takes on the following tasks in particular:

Until the 18th century, ensembles were usually led by one of the active musicians (who was often also the composer of the work performed). In the 17th and 18th centuries, the thoroughbass age , the direction was usually taken from the harpsichord or a violin . In a courtly band, this was the function of the “ concert master ”, who often took turns with the band master in the rehearsal or performance. An example of how such an orchestral direction worked is described using the history of the Dresden court orchestra under its concertmaster Johann Georg Pisendel . In special cases the director stepped in front of the ensemble, for example often at the opera. In historical pictures he is sometimes shown conducting with a piano roll. At the court of Louis XIV he gave instructions not only with arm movements, but with the help of a baton , with which the beat was stamped on the floor. Jean-Baptiste Lully , court musician of King Ludwig XIV. , Who injured his foot so badly with his baton that he died of gangrene a few months later, became famous in this context .

The conductor in function and form or also as a job title as we know him today has only existed since the beginning of the 19th century. Felix Mendelssohn Bartholdy has been considered the first conductor in today's sense of the word since he led the Gewandhaus Orchestra in Leipzig. Increasingly large choirs and orchestras made conducting from the instrument impossible. Until the 20th century, most large orchestras were still conducted by Kapellmeister who routinely created their own compositions and music arrangements for their ensemble. 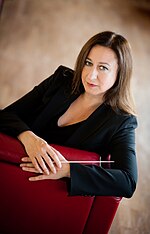 The conductor unites and concentrates the power and (ideally) also the artistic competence of musical creative sovereignty in his person. It is the “eye of the needle” between the performing musician and what can be heard as a musical product. Making music together no longer works through decentralized communication structures among the musicians, but through “subordination”. Because of these skills, the conductor developed a strong social position that made the outstanding prominence of future star conductors possible.

The conductor's “power of interpretation”, similar to that of the theater director, only emerged at the end of the 19th century. It has to do with the fact that the repertoire has increasingly broadened stylistically and value was placed on individual interpretation even with large ensembles. The idea of ​​the Wilhelminian superior who is highly respected, even if he is just a performer, remained associated with the conducting profession in the 20th century.

From 1924 to 1930 Universal Edition in Vienna published a specialist magazine for conductors with the title Pult und Beatstock . It went up in the music magazine Anbruch .

When Nadia Boulanger conducted the Boston Symphony Orchestra in 1938 , she broke into a traditionally male domain. The first internationally known German conductor of symphony orchestras was Hortense von Gelmini in the 20th century . Today female conductors are becoming increasingly popular. One example is the Australian Simone Young , who was chief conductor of the Hamburg State Opera from 2005 to 2015 .

In principle, there are different ways of learning the “job” of a conductor. It is important to distinguish between full-time conductors (e.g. of large symphony orchestras ) and honorary conductors in music associations, brass bands, choirs, etc. The basis is the confident command of at least one musical instrument. Full-time conductors acquire their qualifications by studying at a music college . Part-time or honorary conductors generally acquire their qualifications by attending special training courses, e.g. B. in the brass music of the so-called C3 course. Often these are appropriately talented and experienced musicians who advance to conductors through a position as register manager and in some cases internal instructors (instrumental teachers in music associations). Depending on the regional association or organizational unit, it is usual that the corresponding subordinate courses ( D1 – D3 , C1 , C2) have been successfully attended.