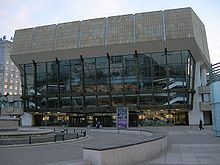 The New Gewandhaus on Augustusplatz in Leipzig

The Gewandhaus Orchestra currently has three commitments and three regular venues in Leipzig: It plays as a concert orchestra in the Gewandhaus , as an opera orchestra in Leipzig Opera and since 1840 as a church music orchestras in the Leipzig city churches, especially in the Thomas Church as a companion of the St. Thomas Boys Choir . In the Gewandhaus the orchestra gives 48 symphony concerts and 20 special concerts as well as 12 chamber music evenings every year .

The Gewandhaus Orchestra is one of the most renowned orchestras in the world. It gained its reputation through the outstanding musical quality, which was shaped by well-known Kapellmeister, and through numerous guest performances and tours worldwide, especially in Japan and North America.

The Gewandhaus Orchestra is characterized by a dark, warm, romantic strings sound. Gewandhaus director Andreas Schulz describes the so-called Gewandhaus sound as a "very dark, earth-colored, yet very transparent" sound and as a "rich, full, almost somewhat bass-heavy string sound". The solo cellist Christian Giger also ascribes a “rich depth” to the Gewandhaus sound. According to concertmaster Frank-Michael Erben , this special string sound is often compared with the character of a deep red Bordeaux wine. It arises on the one hand in terms of playing technique through the bowing and a certain handling of vibrato , on the other hand through an appreciation of the deep voices ( double basses and cellos ) as a strong foundation of the orchestral sound. By adapting the higher vocal groups, their tone also becomes warmer, especially with the violas . The warm string sound is harmoniously complemented by the German trombones . Since the middle of the 19th century, this sound ideal has been promoted by the teaching activities of members of the Gewandhaus Orchestra at the "Felix Mendelssohn Bartholdy" University of Music and Theater in Leipzig and passed on within the orchestra by the experienced musicians to new orchestra members. The Gewandhaus sound was particularly shaped and preserved under Kurt Masur .

Another special feature is the music-making in the German line-up , since this was reintroduced by Herbert Blomstedt in the Gewandhausorchester in the late 1990s.

The historical roots of the Gewandhaus Orchestra go back to the year 1479, when the City Council of Leipzig employed Kunstpfeifer (later Stadtpfeifer ) for musical accompaniment at city festivals, and later also for church services and theater performances .

In 1743, 16 Leipzig merchants financed 16 musicians, including Stadtpfeifer, to found a musical society, the Leipzig Concert , the first concert of which took place on March 11, 1743. Therefore, the Gewandhausorchester is considered to be the oldest non- court concert orchestra in the German-speaking area that has outgrown the bourgeoisie .

Initially, the concerts took place in town houses, later because of the great popularity in the Gasthof Zu den drey Schwanen at Brühl 84 (later No. 7). The name Great Concert became common, as the Leipzig concerts of the Gewandhaus Orchestra are still named today.

On the initiative of the incumbent mayor, the attic of the Leipzig Gewandhaus , the exhibition center for cloth merchants (today the municipal department store ) was converted into a representative concert hall. The first Gewandhaus concert took place in November . The orchestra, then 32 strong, now had its first permanent venue. In 1782 the hall was rebuilt again. At the front of the hall was the slogan of the younger Seneca Res severa est verum gaudium ( true joy is a serious matter ), which became the motto of the Gewandhaus Orchestra.

In 1868 the New Theater on Augustusplatz was inaugurated after the old comedy house had become too small. This enabled operas to be performed more richly.

After the expansion of the Gewandhaus was not enough due to the large number of visitors and the growing orchestra, the New Concerthaus (also known as the New Gewandhaus ) was built between Beethoven and Mozartstrasse, to which the Gewandhausorchester moved in 1884. In the area surrounding this second Gewandhaus, a new city quarter, the so-called music quarter, was built . The New Gewandhaus, which had a chamber music hall in addition to the large hall, became world-famous for its excellent acoustics. As a result, an (enlarged) copy of the building that has survived to this day was built as a concert hall in Boston . In the Leipzig Konzerthaus conducted a. a. Johannes Brahms, Peter Tschaikowski , Edvard Grieg , Richard Strauss and Anton Bruckner .

In 1916 the orchestra was invited to Switzerland and then carried out its first international tour in the middle of World War I. Two more trips to Switzerland followed, and the first European tour in 1931.

During the great air raid in 1943, the New Concerthaus was hit by bombs and burned out. The orchestra's own musical instruments, which were carefully brought to the cellar by the orchestra attendants, have been preserved. The externally intact ruin secured with an emergency roof was demolished in March 1968. The New Theater was also destroyed in the bombing raids.

Arrival of the orchestra at Tokyo Airport on April 12, 1961, the beginning of a four-week concert tour in Japan

Special postage stamp of the Deutsche Bundespost for the 250th anniversary

After 1945 the Gewandhausorchester first appeared in a variety theater, then in a film theater and from 1947 to 1981 in the congress hall on Pfaffendorfer Strasse.

During this time, the orchestra also expanded its concert tours abroad. It undertook its first tour of Japan in 1960, its first US tour in 1974, its first concert tour to South America in 1980 and its first trip to Australia in 2003.

On the occasion of the 225th anniversary of the Gewandhaus Orchestra, graphic artist Hellmuth Tschörtner designed a festive signet in 1967. This curved lettering, the so-called Tschörtner signet , was used in various versions as the logo for the Gewandhausorchester and Gewandhaus in the following years. At the beginning of the 2015/2016 season on August 28, 2015, the corporate design of the Gewandhaus was redesigned, while the Tschörtner logo was modernized by the Hamburg agency Karl Anders.

In the 2012 annual report of the Saxon Court of Auditors , the growing costs were criticized. In particular, it was criticized that the remuneration of the musicians regulated by the company collective agreement is far above the usual collective agreements negotiated by the Deutscher Bühnenverein , while the planned workload was not achieved. It was also criticized that the salaries of the Gewandhaus director were "considerably" higher than that of the mayor and a Saxon state minister. It also became known that the orchestra's tours cause financial deficits.

In 2018 the Gewandhausorchester could already look back on 275 years of history. On the occasion of this anniversary, a two-volume work on the history of the orchestra was published by Verlag Klaus-Jürgen Kamprad . The new chronicle replaced the orchestra's previous chronicle, which was published on the 250th anniversary in 1993.

Four chamber music ensembles, some of which are very traditional and made up of members of the Gewandhaus Orchestra, have the addition of "Gewandhaus" in their name:

Members of the orchestra also play in numerous other chamber music groups.

The Leipzig Bach Orchestra is also recruited from musicians from the Gewandhaus Orchestra .