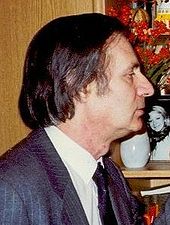 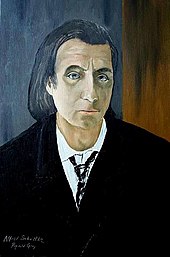 Relief stone in front of the grave

Schnittke was the son of the Jewish journalist Harry Schnittke from Frankfurt am Main and the Volga German teacher Marie Vogel. He was the brother of the writer Viktor Schnittke . In 1946 Alfred Schnittke began his musical training with private lessons with the Austrian piano teacher Charlotte Ruber in Vienna , where his father worked as a war correspondent for the Austrian newspaper until he was demobilized from the Red Army in 1948 . The family returned to Moscow , where Alfred Schnittke attended the music school "October Revolution" (Moskowskoje musykalnoje utschilishche imeni Oktjabrskoi rewoljuzii) from 1949 to 1953 and continued his education from 1953 to 1958 at the Moscow Conservatory with Yevgeny Golubew and Nikolai Rakow . From 1961 to 1972 he taught at the conservatory. From 1973 he devoted himself only to composition. After initial attempts with compositional techniques such as aleatoric and serialism , Schnittke turned to a polystylistic way of composing that invokes Charles Ives , Luciano Berio and Bernd Alois Zimmermann . His works received first attention in the West at the Days for New Music in Donaueschingen in 1966. In 1985 he suffered a stroke , as a result of which he was clinically dead for a short time ; he "released tremendous creative powers in him - a good half of his most important works were created in the 13 remaining years, in which three more strokes in 1991 and 1994 kept him from working". Even after his fourth stroke, he was still able to write a 9th symphony before he died in 1998 at the age of 63.

In 1990, after having lived and worked in the Soviet Union for over 40 years, Schnittke moved with his family to Hamburg , where he took on a professorship for composition at the conservatory . From 1992 until his death he lived in Hamburg-Eppendorf , Beim Andreasbrunnen 5, where a memorial plaque is now attached.

Schnittke converted to Christianity and his mystical beliefs influenced his music.

In 1986, Schnittke received the State Prize of the Russian Socialist Federal Soviet Republic , known as the Krupskaya Prize. In 1989 he was honored with the Nika Film Prize and in 1992 he was awarded the Praemium Imperiale and the Bach Prize of the Free and Hanseatic City of Hamburg .

In 1995, Schnittke was awarded the State Prize of the Russian Federation . In the same year he received the Austrian Decoration of Honor for Science and Art and was elected as an honorary member of the American Academy of Arts and Letters .

In search of his compositional identity, Schnittke initially wrote a lot of scenic music and film music. The second violin sonata from 1968 marks the beginning of this new style of composition, but at the same time, Schnittke also embarked on a compositional journey through sounds and concepts that emerged with each work. He immediately titled his 1st Symphony (1972–74) as “Un-Symphony”; it is a fully composed question mark of gigantic proportions and deals with the search for a contemporary symphonic form of the 20th century. Gestural and theatrical elements, another important characteristic of Schnittke's music, are included here as well as traditional forms and styles, even jazz is staged as a "possibility", it is a symphonic apocalypse. John Neumeier used this music for his ballet end stop Longing for Tennessee Williams .

Alfred Schnittke composed around 70 film scores. Since about 2001 this has been noticed by an increasingly larger audience, which is to a considerable extent due to the conductor of the Rundfunk-Sinfonie Orchester Berlin, Frank Strobel . Since then, Strobel has recorded the score for, among others, Agonia , Die Kommissarin , Clowns und Kinder , Der Meister und Margarita , Rikki-Tikki-Tavi and Sport, Sport, Sport . This was entirely in the spirit of Alfred Schnittke, who saw his film scores as being on par with the “serious” compositions. In 2005 and 2006 this was honored with the “ German Record Critics ' Award”.