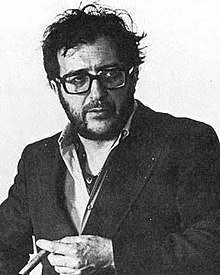 Luciano Berio (born October 24, 1925 in Oneglia ; † May 27, 2003 in Rome ) was an Italian composer , known for his experimental compositions and as one of the pioneers of electronic music .

Berio was born into a musical family in the Ligurian coastal town of Oneglia. Both his father and grandfather were organists and taught him to play the piano . During the Second World War he was drafted into the army, but injured his hand with a rifle on the first day. He spent time in a military hospital and eventually fled to join a resistance group.

After the war, Berio studied at the Milan Conservatory with Giulio Cesare Paribeni (1891–1964) and Giorgio Federico Ghedini . Hindered from playing the piano by the injured hand, he concentrated on the composition. In 1947 the first public performance of one of his works took place, a suite for piano.

At that time Berio was earning his living accompanying singing classes; he met the American soprano Cathy Berberian . They married shortly after graduating from university in 1950 (they divorced in 1964).

In 1951 Berio went to the United States to study in Tanglewood with Luigi Dallapiccola , who aroused his interest in serial music . Bruno Maderna took him to the Darmstadt Summer Courses for New Music , which he attended from 1954 to 1959. There he met Pierre Boulez , Karlheinz Stockhausen , György Ligeti and Mauricio Kagel . He began to be interested in electronic music and founded the Studio di Fonologia Musicale , a studio for electronic music, with Bruno Maderna in Milan in 1955 . He invited a number of important composers to work here, including Henri Pousseur and John Cage . He also edited an electronic music magazine, Incontri Musicali .

In 1960 Berio returned to Tanglewood as “Composer in Residence” and in 1962, at the invitation of Darius Milhaud, accepted a teaching position at Mills College in Oakland (California) . In 1965 he began teaching at the Juilliard School , where he founded the Juilliard Ensemble , which is dedicated to performing contemporary music . In the same year he married for the second time.

Meanwhile, Berio worked steadily on his compositions. In 1966 he won the Prix ​​Italia for Laborintus II , in 1968 his most famous work, the Sinfonia , premiered with great success .

In 1972 Berio returned to Italy. From 1974 to 1980 he was director of the electroacoustics department at IRCAM in Paris. In 1977 he married for the third time (his second marriage had been divorced in 1971). In 1987 he founded Tempo Reale in Florence , a center with a similar focus to IRCAM. In 1988 he was awarded an Antonio Feltrinelli Prize .

Most of Berio's electronic works originate from his time at Studio di Fonologia in Milan. One of his most influential works from this period is Thema (Omaggio a Joyce) from 1958, in which Cathy Berberian reads from James Joyce's Ulysses . In a later work, Visage (1961), Berio created wordless emotional language by arranging fragments of a recording of Berberian's voice.

In 1968 Berio completed O King . There are two versions of this composition, one for voice, flute , clarinet , violin , violoncello and piano , the other for eight voices and orchestra. The piece is dedicated to the memory of Martin Luther King , who had been assassinated little before.

Shortly after its completion, the orchestral version of O King was integrated into the Sinfonia (1968–69) for orchestra and eight voices. The voices are not used in the traditional way; the singers are amplified by microphones, except for singing rhythmic or free speech and whispering is required. Berio uses text material from a wide variety of sources, such as Claude Lévi-Strauss ' Le cru et le cuit , Samuel Beckett's The Unnameable , performance instructions from various scores, solmization and Scat syllables, or comments on musical quotations that are currently being heard. The third movement is particularly well known; here Berio takes the third movement from Mahler's Second Symphony and lets the orchestra play a slightly shortened and newly arranged version of it. At the same time, different voices recite texts from different sources, and the orchestra plays quotes from Claude Debussy , Arnold Schönberg and others. This creates a dense collage . The result is a work with the usual scheme of tension and dissolution in classical music - using a completely new language. At any point in time, the actually used chords and melodies play a subordinate role compared to the fact that one hears a certain quote from Mahler, Alban Berg or Beckett. Because of this, the phrase is often considered to be one of the earliest examples of postmodernism in music. It has also been described as a deconstruction of Mahler's Second Symphony, much like Visage was a deconstruction of Berberian's voice.

A-Ronne , from 1975, also uses the collage technique, but focuses more on the voices. It is a piece for eight voices and an optional piano part. The work is one of a series of collaborations with the poet Edoardo Sanguineti , who created a text for her full of quotations from the Bible , TS Eliots and Karl Marx .

Not all of Berio's works cite the works of others. Perhaps the most famous among those for whom this is not the case is the series of compositions for solo instruments under the name Sequenze . Sequence I was written in 1958 and is for transverse flute , the last Sequence XIV , for violoncello , was completed in 2002. The common characteristic of these works is that they seek to explore the possibilities of the instrument and often require new playing techniques. Thus, in the technically difficult piecesequence XI from 1988, various playing techniques of the guitar are combined.

Berio was known for adapting and transforming the music of others, but he also subjected his own works to this process: the Sequenze series was the starting point for a series of works called Chemins , each based on the Sequenze . Chemins II (1967), for example, takes the originalsequence VI for viola and adapts it for viola and nine other instruments. With the addition of further instruments, further derivatives emerged, Chemins IIb , Chemins IIc and Chemins III . The names of the derived works do not necessarily follow this pattern, for example Corale from 1981 is based onsequence VIII for solo violin.

In addition to independent work, Berio undertook a number of arrangements of older works, including works by Claudio Monteverdi , Henry Purcell , Johannes Brahms and Gustav Mahler . For Berberian he wrote Folk Songs (1964) and (1967) arrangements of three songs by John Lennon and Paul McCartney . His completion of Giacomo Puccini's opera Turandot (premiered on May 25, 2002 in Los Angeles ( Kent Nagano )) also belongs in this context ; In his orchestral piece Rendering (1989) he completed the few sketches that Franz Schubert left for his Symphony No. 10 with his own music derived from other works by Schubert.

Berio's other compositions include Circles (1960) and Recital I (for Cathy) (1972), both written for Berberian, and a number of stage works, of which Un re in ascolto , written in collaboration with Italo Calvino , is probably the best known .