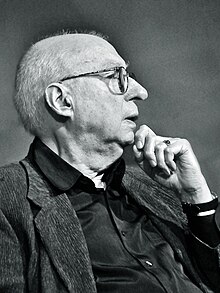 Aribert Reimann (born March 4, 1936 in Berlin ) is a German pianist , composer and musicologist.

Aribert Reimann is the younger son of the church musician Wolfgang Reimann (1887–1971) and the contralto Irmgard Rühle (1894–1972). Reimann was already composing his first piano songs as a ten-year-old. After graduating from high school, he started working as a répétiteur at the Städtische Oper Berlin . He also began studying composition, counterpoint and piano (with Boris Blacher and Ernst Pepping among others ) at the Berlin University of Music . As early as 1958 Reimann went to study musicology at the University of Vienna . At the end of the fifties he also made his first appearances as a pianist and accompanist. At the beginning of the seventies Reimann became a member of the Akademie der Künste (Berlin) . From 1983 to 1998 he took on a professorship at the Berlin University of the Arts in the field of contemporary song . Reimann wrote chamber music , orchestral works, operas as well as a wide range of vocal music works from unaccompanied solo singing to choral symphonies and thus became one of the most important contemporary composers.

Cooperation between Aribert Reimann and Günter Grass for ballet marked the beginning of his career . The collaboration came about through the mediation of the dancer and choreographer Marcel Luipart . Reimann composed the story ballets Stoffreste (1959) and The Scarecrows (1970) based on a libretto by Grass . In 1966 he also set the poem March by Günter Grass to music for speaking voice and flute. First and foremost, Reimann excelled as a composer of important (literary) operas : With Ein Traumspiel nach August Strindberg , which premiered in 1965, Reimann's successful work as an opera composer began. Melusine (1971 Schwetzinger Festspiele ), Lear (1978 Bavarian State Opera ) based on William Shakespeare , The Ghost Sonata based on August Strindberg (1984 Berlin), Troades based on the play by Euripides in the version by Franz Werfel (1986 Munich), Das Schloss based on the novel by Franz Kafka (1992 Berlin), Bernarda Albas Haus based on Federico García Lorca (2000 Munich) and Medea based on the third part of the trilogy of the same name Das goldene Vlies by Franz Grillparzer (2010 Vienna) firmly consolidated Reimann's position as one of the leading German opera composers.

Reimann has received many awards, including a. with the Great Cross of Merit with Star of the Federal Republic of Germany and the Order of Merit of the State of Berlin. In 2011 he was awarded the Ernst von Siemens Music Prize for his life's work.

At the invitation of Walter Fink , he was the seventh composer in the annual composer portrait of the Rheingau Music Festival in 1997 .

The work Cantus for clarinet and orchestra , dedicated to the contemporary clarinetist and composer Jörg Widmann , premiered on January 13, 2006 in the large broadcasting hall of the WDR in Cologne. Reimann was inspired for this work by the compositions for clarinet by Claude Debussy . He lives and works in Berlin.

The Busoni Composition Prize was donated by Aribert Reimann in 1988. It is the only prize awarded by the Akademie der Künste to promote the next generation of composers. Composition students have also been supported since 1992. 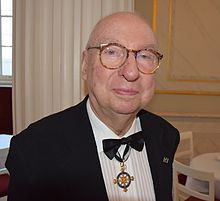