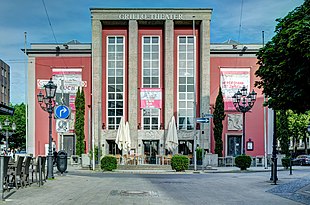 The Grillo Theater has been the main theater of the drama ensemble in Essen since 1988 . It is located in the city ​​center and has its origins in the city ​​theater that was opened in 1892 and donated by the Essen entrepreneur and industrialist Friedrich Grillo .

Founding and development as a city theater

The Clevischer Hof was once located on the site of today's theater building . Later, until the beginning of the 1890s, the two-storey building of a Protestant school and a small house in which Friedrich Schulte ran a paper shop, as well as the parents' house of the widow Grillo.

The theater building was built in neo-baroque style based on designs by the Berlin architect Heinrich Seeling . It bears the name of the industrialist Friedrich Grillo who made the construction of the theater possible. It is one of the oldest theaters in the Ruhr area . The opening took place on September 16, 1892 with a performance by Gotthold Ephraim Lessing's Minna von Barnhelm .

The patron Friedrich Grillo, who died in April 1888, did not experience the construction and opening of his imaginary theater. In the city council meeting on October 14, 1887, Grillo announced that he felt obliged to have a theater built for the city of Essen. He already has an amount of 500,000  marks ready for this, but he will pay for any kind of possible additional costs. He wanted to set up the theater in a style so that it could compete with larger theaters. In addition, he wanted to pay for the maintenance of the theater throughout his life so that the city would not incur any costs. Since Grillo died about six months after his speech at this meeting, there was no further act of donation for the funds required for the construction. The theater did not mention his last will either. His widow, Wilhelmine b. von Born (1829–1904), cousin of the banker and entrepreneur Ludwig von Born , declared herself to be the executor of her husband's publicized plan. She made the property of her parents' house on I. Hagenstrasse available with the adjoining garden that was later acquired. Adjacent properties, which also included that of the Protestant school building, had passed into the ownership of the city of Essen by the end of May 1889. Their purchase was covered by the sale of the municipal parks on II. Hagenstrasse for building sites, so that the donation amount for the building site remained manageable. In an architectural competition, the Berlin architect Heinrich Seeling received first place out of 34 applicants . Wilhelmine Grillo accepted the draft with the requirement that the funds made available must not be exceeded. On May 20, 1889, the deed of donation was officially handed over to the city of Essen. On May 31 of that year, the entrepreneur Friedrich Alfred Krupp committed to support the theater business with 10,000 marks annually. The actual construction of the city theater with a floor area of ​​1396 square meters began in the spring of 1890 under the supervision of the architect Duhm. The entrance side of the 16 meter high building, surmounted by a dome over the stage building, faced Kettwiger Strasse then as now . The theater hall offered space for 800 guests. The words from Goethe's Faust adorned the stage arch :

"Only those who deserve freedom for life who have to conquer it every day."

From the beginning, the set house of the grill theater was provisionally housed in the building of a former Catholic elementary school to the east behind the theater, which the city administration had bought. The stage wing, which turned out to be too small, and the temporary arrangement for the backdrops required renovations as early as 1894 and 1896. Finally, the city of Essen approved a total of 75,000 marks in 1907 to build a new set house and also to expand the backstage and the lighting system. The building, begun in the same year, was completed in 1908. 98 years later, in 2006, the backdrop house with the connecting bridge to the theater complex was placed under a preservation order. The temporarily used former school building was demolished shortly after 1908.

The theater housed the three sections opera, dance and drama, but became too small for the rapidly growing city around 1900. In 1926–1927, architects Georg Metzendorf and Jakob Schneider had an older hall building on Hindenburgstrasse converted into a municipal theater, which was destroyed in the Second World War.

Caspar Neher became a set designer in 1927 and designed eight operas and eleven plays here. The Green Table by Kurt Jooss in 1932 received the first prize at the International Choreography Competition in Paris.

After the reconstruction after the Second World War

During the Second World War , the building and especially its historic facade were largely destroyed. After the heavily modified reconstruction according to plans by the architects Wilhelm Seidensticker (* 1909) and Johannes Dorsch , the theater was reopened in 1950 with a performance of Richard Wagner's opera Die Meistersinger von Nürnberg .

The sculptor Herbert Lungwitz created three reliefs for the main entrance area of ​​the theater around 1950.

Productions by Erwin Piscator , Jean-Louis Barrault and Heinz Dietrich Kenter ensured the theater's special reputation, in which the longstanding (1943–1975) general music director Gustav König set important accents with the performance of modern operas. His successor from 1975 to 1991 was Heinz Wallberg , who from 1976 to 1978 was the musical director of the opera Matthias Aeschbacher , who later also worked at the Aalto Theater.

From 1967 to 1981 the choreographer Boris Pilato was the ballet director.

From 1985 to 1992 Hansgünther Heyme was the acting director. After the completion of the Aalto Theater in 1988, the city of Essen planned to close the Grillo Theater due to construction defects. Heyme successfully fought against these plans. Extensive renovations based on a design by the architect Werner Ruhnau - reducing from 670 to 400 seats - created a variable room theater that now only serves as a theater. It reopened in September 1990 with a performance of Shakespeare's Midsummer Night 's Dream .