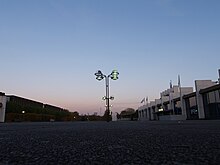 The Westphalian State Theater (WLT) is a state theater based in Castrop-Rauxel , North Rhine-Westphalia , Germany .

There are four regional theaters in North Rhine-Westphalia: the Westphalian State Theater , the State Theater Detmold , the State Theater Burghofbühne in Dinslaken and the Rhenish State Theater in Neuss . Landestheater is an organizational form of public theater companies that travel with their programs and perform in cities and towns that do not have their own ensemble. The program of the state theaters is booked on the basis of the schedule by cultural associations, cultural associations, cultural offices or organizers. The Westphalian State Theater plays mainly in North Rhine-Westphalia, but also in other federal states such as Lower Saxony, Hesse, Baden-Württemberg, Saarland and neighboring states.

All premieres of the Westphalian State Theater take place in Castrop-Rauxel. The number of presentations and visitors increases regularly. In the 2017/18 season there were over 360 performances and around 85,000 spectators. The Westphalian State Theater stages up to 15 premieres per season . At its location on Europaplatz in Castrop-Rauxel, the WLT has two venues: the town hall with 570 seats and the WLT studio with 100 seats.

The Westphalian State Theater has had a rehearsal and logistics center since 2018 . It consists of two interconnected buildings. The first serves as a store for props and scenery on 650 m², in the other part there are two large rehearsal stages, social rooms and rooms for classroom productions and play clubs on 750 m². On the 4,400 m² plot of land there are outside areas for a total of 23 swap containers for guest trips.

The total budget of the Westphalian State Theater eV (2012: approx. 4.2 million) consists of grants from the state of North Rhine-Westphalia, the Regional Association of Westphalia-Lippe (LWL), the ten sponsoring cities of the association (Castrop-Rauxel, Bottrop , Brilon , Dorsten , Hamm , Iserlohn , Marl , Meinerzhagen , Recklinghausen and Witten ), the city of Castrop-Rauxel and own income. The WLT receives further support from the visitor organization “Volksbühne eV” and the theater support group “Society of Friends of the WLT”.

The WLT , with its evening theater and the dedicated division Children and Youth Theater a pluralistic Schedule for small and large stages, as well as for classrooms or kindergartens. In addition to classics, musical performances, tabloids, crime novels, contemporary pieces and pieces with an experimental character, performances for children and young people of different age groups are shown.

There are also theater education offers in the program . The focus is on sensitizing children and young people to theater. With preparations and scenic introductions within the class, personal access to the “theater” experience is created. Rehearsal visits, theater tours and follow-up discussions with the artists and other participants show everyday work at the theater. However, the educational theater offer is also aimed at teachers and includes assistance for their own theater work. The Westphalian State Theater includes the WLT play clubs: Children's club, teen club, youth club and generative.

Since the summer of 2002, the WLT has had a complete open-air stage with a grandstand for up to 500 guests.

In the summer, the WLT transforms the Parkbad Süd , a former open-air swimming pool in Castrop-Rauxel, into another venue and presents children's theater and musical productions as open-air performances under the motto “Stage out… Theater outdoors” .