from Wikipedia, the free encyclopedia
This is the spotted version , flagged on July 21, 2020 . There are 2 pending changes that have yet to be viewed. 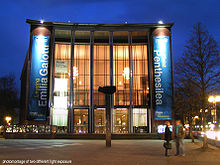 The Stadttheater Bochum (approx. 1920) before its destruction in the Second World War

The Schauspielhaus Bochum on Königsallee in Bochum , district of Ehrenfeld , is one of the largest and most renowned theaters in Germany .

The vaudeville theater, which was built in 1907–1908 according to plans by the architect Paul Engler , under the client of Clemens Erlemann , developer of the Ehrenfeld district in Bochum , was initially opened under the name “Orpheum” and when it opened in October 1908 it was the largest stage in the Ruhr area. It was soon given the new name "Apollo Theater", but suffered persistent economic difficulties due to insufficient occupancy. It turned out that the concept of a variety theater favored by Erlemann for unknown reasons with entertaining folk plays missed the audience's taste, whereby the lack of response from the population was also due to the poor acoustics of the building and the poor view of the stage. As an increasing number of the 2,000 seats became vacant after a short time, Erlemann had to close the theater in 1909 and began work on converting it into a theater stage in June 1912 at its own expense. Erlemann's financial base, however, proved to be insufficient, so that he had to file for bankruptcy a little later.

The theater was finally taken over by the city of Bochum and completely rebuilt in 1914/1915 by the Cologne architect Carl Moritz, who is considered a theater specialist , and reopened as a city theater in 1915. As a result of the renovation, the facades with their Art Nouveau elements were changed and redesigned in the style of neoclassicism .

During the First World War , the city stage from Düsseldorf made a guest appearance .

Bochum got its own drama ensemble under artistic director Saladin Schmitt in 1919, when the Bochum Symphony Orchestra was founded at the same time . Furthermore, the director was nominally the director of the Bochum drama school , but assigned this task to the ensemble member Willi Busch .

Under him, the theater soon made a name for itself as a Shakespeare stage , which also consistently dealt with the German classics. Schmitt shaped the "Bochum style" with the largely original production of German classics. Gisela Uhlen and Horst Caspar were among the stars of the Bochum ensemble at that time . At the end of the 1934/1935 season, the theater partnership with Duisburg was ended.

The building was destroyed to the ground in an air raid by the Royal Air Force on Bochum on November 4, 1944.

Between the summer of 1951 and autumn of 1953, today's Bochum theater was built on the old foundations according to the designs of the architect Gerhard Graubner . The current theater building, which is under monument protection , was awarded the plaque “Distinguished as an exemplary building of its time. (1945–1957) ”, which hangs on the facade of Königsallee.

Graubner designed the auditorium of the theater based on the example of the ancient Greek theater with sharply rising semicircular rows of spectators, a semicircular tier and a few boxes. In addition, the game moved closer to the audience, as the iron curtain was first put on in a German theater in a semicircle and in front of the front stage. Stage sets can be designed up to the stage ramp.

Kidney-shaped smoking salons, bar and cloakroom areas, but also balconies are just as stylish as the famous Bochum "tulip lamps" (wall and ceiling lights in floral form), chandeliers, kidney tables and curved sofas as typical interiors of the 1950s.

According to Graubner's plans, the Kammerspiele Bochum , which opened in October 1966, was built with an audience capacity of 410 and inaugurated in 1966, was built around a decade later in the immediate vicinity of the theater on the site of the 15th century aristocratic residence Haus Rechen , which was destroyed in the war .

Hans Schalla and his set and costume designer, head of equipment, director and deputy director Max Fritzsche , who worked at the theater for more than two decades , jointly developed the “Bochum style”. This made the playhouse famous beyond Germany's borders. Characteristic of the “Bochum style” is a shortened, post-expressionistic way of playing in spaces of analytical clarity, which make the spiritual dimension tangible through the senses.

Numerous invitations to guest performances at home and abroad, etc. a. to Paris, Venice and Berlin, testify to the reputation of this theater. The performance of Sartre's The Devil and God at the III. Festival de Paris 1956 became a triumphant international success. Stars like Bernhard Minetti, Hannes Messemer, Rolf Boysen, Eva-Katharina Schulz, Rosel Schaefer, Rolf Henniger, Claus Clausen, Manfred Heidmann, Rolf Schult and many others were involved at the Schauspielhaus.

Hans Schalla was followed by Peter Zadek , who started his first season as artistic director with the big revue Kleiner Mann - what now? opened by Hans Fallada . At Zadek, Rainer Werner Fassbinder staged Liliom by Ferenc Molnár , Rosa von Praunheim people in the hotel by Vicki Baum , and Werner Schroeter brought a Salomé by Oscar Wilde to the theater stage, almost like an opera. Actors were u. a. Hannelore Hoger, Rosel Zech, Ulrich Wildgruber, Hermann Lause, Fritz Schediwy and Herbert Grönemeyer. In 1972 Peter Zadek opened a third, smaller venue for studio productions under the auditorium of the large house, the "Theater Below".

The theater reached another heyday under the direction of Claus Peymann in the early 1980s. His Bochum ensemble with stars like Gert Voss , Kirsten Dene or Traugott Buhre was considered the most innovative theater in Germany. Peymann also placed a focus on the premieres of contemporary authors such as Thomas Bernhard , Heiner Müller or Peter Turrini .

After Peymann left the Burgtheater Vienna, Frank-Patrick Steckel took over the management of the Königsallee. Not only did he bring directors like Andrea Breth and Jürgen Gosch to Bochum for the first time, he also brought Reinhild Hoffmann to the directorate of the house and her dance theater to Bochum - a novelty on the stage of the theater.

In 1995 Leander Haußmann came to the stage as Germany's youngest director at the time. Together with his fellow directors Jürgen Kruse and Dimiter Gotscheff , in deliberate contrast to his predecessor, he was aiming for a loud, "fun" theater - and not only made friends in Bochum, but managed to inspire a younger audience than his predecessor . The "radiant heart", the logo of the artistic director Haußmann, became known nationwide.

He was followed by Matthias Hartmann, who was 37 years old at the time, and was followed by another “young director”, who also took on his first directorship in Bochum. During his tenure, Hartmann achieved equally high-profile coups such as the engagement of Harald Schmidt as well as widely celebrated productions. The Schauspielhaus Bochum has therefore received several awards from specialist magazines as one of the best German-speaking theaters of its time. Like his predecessor, Hartmann left the company in 2005 after only one contract period.

Burned out prop store, only one outer wall is still standing

Rumpel-Pumpel-Theater in front of the RUB Audimax

On September 12, 2006, the 2500 m² outdoor warehouse of the Schauspielhaus in Weitmar burned down to the ground. Historical and current stage sets, costumes and props as well as valuable technology fell victim to the flames and were irredeemably lost. The loss caused immense financial and moral damage. Due to a wave of solidarity, in which the state of North Rhine-Westphalia , nationwide numerous theaters, spectators and other people connected to the house helped by donating scenery, clothing, furniture and money, the endangered gaming operation could be maintained to a limited extent.

In April 2007, a new wing of the building with a painter's hall, set store and workshops was opened, which is attached to the theater and the Kammerspiele.

In 2000, the upper machinery was overhauled and a new sound and stage management system was installed, and the building, especially the foyer and spectator area, was completely renovated in accordance with the listed building standards and spectator sponsorships were awarded for the renovated seating.

Since March 2014 the theater has been listed in the Route of Industrial Culture , Themed Route Bochum .

Due to a water pipe burst on December 14, 2019, gaming operations in the Great House were largely paralyzed until mid-January. Performances could still take place in the Kammerspiele, but many premieres and performances had to be canceled or postponed. The popular annual New Year's Eve party could not take place either. On January 18th, the Great House was reopened with the premiere of "Iwanow" (director: Johan Simons).

Shortly thereafter, however, the theater had to completely stop operating again: Due to the corona virus, the theater will be temporarily closed until April 19, 2020.

The "Theater Down" was created in 1972 under the director Peter Zadek. Renamed "ZadEck" under artistic director Leander Haußmann based on the former artistic director, it was renamed "Theater Unter Tage" at the beginning of the 2000/2001 season and became "Theater Below “named back. Since the opening of the 2018/2019 season under Johan Simons, the room has been called the “Oval Office” and is a versatile exhibition space for renowned international artists from the fields of film and video art, digital art or spatial and light art.

At the Schauspielhaus Bochum, among others, the following actors and guest actors have appeared:

Since the 2005/06 season, the Bochum Theater Prize has been awarded annually to two of the Schauspielhaus artists in the main and young talent categories. The nomination is made by the members of the Freundeskreis des Schauspielhaus, a jury selects the winners from the list of nominees. The award takes place as part of a public event in the theater. The prizes in the two categories are endowed with 3,000 euros each (as of 2018).