Einstürzende Neubauten is a German band that pursues an experimental style of music. The Berlin band was founded in 1980 by Blixa Bargeld , NU Unruh , Gudrun Gut and Beate Bartel ; the latter two played with Mania D since May 1979 . The occupation fluctuated initially and consolidated in 1981 personnel to cash balance, which from the Hamburg band down -added FM unit and Mark Chung and the 15-year-old Berlin Underground -Star Alexander Hacke alias Alexander von Borsig. 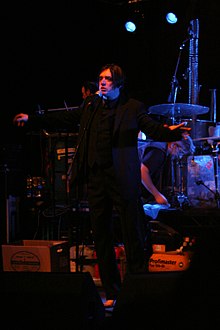 Founded on April 1, 1980, Einstürzende Neubauten came about by chance. Blixa Bargeld was asked if he would like to play in the Berlin Moon Club , whereupon he said he “just called a few friends”. This concert and the first recordings of the band were played with normal instruments. A financial emergency brought Andrew Unruh to have to sell his drums, whereupon the band mostly used a set of junk and everyday objects with which they staged an apocalyptic view of the world. In 1982, the band and the group Die Tödliche Doris conceived the performance How to make a record out of a yellow tub / water music and performed it together in the Berlin bar “Risk”. In 1983 the Einstürzende Neubauten appeared in the Golden Hall of the Nazi Party Rally Grounds in Nuremberg. Blixa Bargeld described this concert in the Nazi building, which is the only one to date, as an “exorcism” with which the band wanted to “bring a different presence into these supposedly holy halls, a presence that reflects the totalitarian ideas with which the location is connected, confronts. "

Stylistically, the band was always difficult to assign. While the boundaries between music and noise were explored in the early days, the works are later mostly more melodic , if no less abstract and epic . In their early years, Depeche Mode were strongly influenced by the sound of the new buildings when they were recording in the Berlin Hansa recording studios .

The band's name was chosen before the roof of Berlin's congress hall collapsed. The collapse of this German-American symbol in 1980 suddenly gave the name a contemporary dimension.

After initial successes in the mid-1980s, the group increasingly moved away from the punk and post-industrial movement and increasingly took part in theater and radio play projects, for example with Peter Zadek in 1986 in the Hamburger Schauspielhaus and in 1987 in Heiner Müller's radio play production of Fatzer fragments by Bertolt Brecht for the radio of the GDR , 1990 for the Hamlet machine (also Heiner Müller) and 1994 for Faust by Werner Schwab and 2000 at the Schauspielhaus Bochum with John Gabriel Borgman by Henrik Ibsen , directed by Leander Haußmann .

In 1986 the Japanese director Sōgo Ishii made the film 1/2 man about Einstürzende Neubauten, which was released again on DVD in 2005 .

On May 16, 1992, Einstürzende Neubauten was the focus of Erich Wonder's Das Auge des Taifun campaign on the occasion of the 300th anniversary of the Academy of Fine Arts Vienna . Here they drove slowly in a glass and steel construction with a husky team, surrounded by artificial snow , along Vienna's Ringstrasse, filling Vienna at night with avant-garde sounds.

With the album Tabula Rasa finally left the post-industrial environment, the music became much quieter, but remained abstract.

In 1996, the last joint record was released with FM unit of the band during the recording end new left (Mark Chung had already left the new buildings in 1994 to intensified its music publishing Freibank to devote). FM Einheit fell out with front man Blixa Bargeld and no longer agreed with the set goals of the band. The two did not exchange a word afterwards, and Cash was only informed of the exit from the band by third parties. Chung, however, continued to follow his professional plans and maintains contact with the band as the music publisher of the Einstürzende Neubauten to this day.

For the 1997 tour, the line-up was expanded to include guitarist Jochen Arbeit , who previously played with Die Haut , and percussionist Rudolf Moser, while Alexander Hacke switched to bass . This line-up has remained unchanged since then and is also supplemented by Ash Wednesday on the keyboards at concerts . 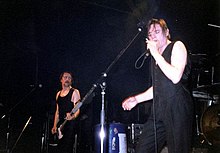 New buildings collapsing in 2000 in Karlsruhe

With the album Silence Is Sexy , which was released in 2000, the remaining members tried to build on their earlier successes. A video was even made for the play Sabrina (as was previously the case for Stella Maris , Blume and Die Interimsliebenden ).

2004 appeared with Perpetuum mobile a public version of the first supporter album with Mute Records , which was extensively toured. The album is just as calm as Silence Is Sexy , but shows an increased willingness to experiment and material testing. Musically, the band moves here within the framework of what can be done with air, so the working title of the work was for a long time Air Change .

In 2005, for the 25th anniversary, the band toured North America and Europe again. In addition, the official biography was published, Only what is not is possible (English title: No Beauty Without Danger ). Blixa Bargeld claims to be working on his personal biography.

In 2009 the documentary Elektrokohle (Von Wegen) by Uli M Schueppel about the first concert of Einstürzende Neubauten in the culture house of VEB Elektrokohle Lichtenberg in East Berlin was released. As early as 1989, Schueppel combined footage he had shot with current scenes. The concert at that time was co-initiated by the writer Heiner Müller , who also gave a speech and, in addition to the French Minister of Culture Jack Lang, also brought other members of the French ministerial delegation backstage and was shown worldwide at events on the occasion of the 20th anniversary of the fall of the Berlin Wall.

In 2002, Einstürzende Neubauten began work on a new album without the backing of a record company, as the label Mute was sold to EMI. EMI did not continue the contract. For the new record, the band relied instead on a kind of street artist scheme with their internet project . Over 2000 fans (also known as supporters ) signed up on their website and supported the production of the new album by transferring $ 35 each. Instead, there was later the CD Supporter's Album # 1 for each supporter . In addition, they had the opportunity to watch the band rehearsing via the internet and to send questions and suggestions to the band directly via chat.

Phase II of the Supporter's Project started at the end of 2003 and was completed in September 2005. This time there was no publicly available album. The result of this phase was titled plot and thus caused some confusion, as there was already a song on perpetuum mobile with the same name. The CD also contained a new recording of the Neun Arme , originally released in 1983, in a medley with the new song Die Nacht .

Phase III was launched on February 10, 2006 after a six-month supporter project break. The plan was to produce a CD and DVD again; an exclusive album for the supporters, which represents the luxury version of the public album in self-distribution, as well as four additional songs, i.e. approx. 19 minutes of additional playing time.

A jewel , a freshly recorded track, was also available for download every month . These 15 pieces resulted in an additional album, which was released publicly in 2008 under the name Jewels.

In 2006 Danielle de Picciotto , wife of Alexander Hacke, published the DVD Einstürzende Neubauten-on Tour with neubauten.org , in which international supporters from neubauten.org describe the project in detailed interviews.

On October 19, 2007, the public album Alles was published again openly , which is a shorter version of the album for supporters with a length of 53 minutes and a slightly different artwork. The exact track list, playing time and information as well as an audio sample of the song Weil weil weil can be found on the specially created site Alles-wieder-offen.com .

Collapsing new buildings at a concert in Ludwigshafen (2015)

The model house project was also launched in 2005 . For a contribution of 100 euros, fans can receive four new CD's per year with experimental pieces. This project is independent of the Supporter's Project . The first issue was released in spring 2005 and was titled Anarchitektur (the CD only contains a 45-minute ambient track), the second issue is titled Incredible Noise and was released in late summer. Part three followed in December, Solo Bassfeder - a concept album devoted exclusively to Andrew Chudy's (NU Unruh) Bassfeder and the various methods of using it.

At the beginning of March 2006 the fourth CD of the model house series was released. Based on recordings of a live performance by the Redux Orchestra and members of Einstürzende Neubauten in Berlin, four of the seven pieces played were reworked and published. You can hear very long versions of No Beauty Without Danger , Wueste , Installation No.1 and Negative No , which come from older albums from 1981 to 1996, in a purely orchestral arrangement.

The fifth part of the series, called Cassettes , was released in May, presenting old and new tapes in a performative context . In addition to answering machine texts (including requests for guest list entry at concerts), you can also hear ambience recordings from West Berlin from the early 1980s in crystal clear, modern production.

Ten days after the opening of the Elbphilharmonie in Hamburg , on January 21, 2017, Einstürzende Neubauten performed as part of the opening festival with the tour program Greatest Hits . The 2017 kick-off of the tour of the same name - comprising 14 concerts in several countries - the band completed three days earlier in the Osnabrück Hall in front of 1700 visitors.

In the run-up to the 2017 tour kick-off, Tom Bullmann, author of the Neue Osnabrücker Zeitung, interviewed Neubauten bassist Alexander Hacke. When asked whether the band had applied for a performance in the Elbphilharmonie Hamburg, Hacke said:

“We were asked quite normally. I think someone in the house has a good dose of humor, because after all the bankruptcies, bad luck and mishaps that happened there in connection with the Elbphilharmonie, to invite a band into the newly opened building called 'Einstürzende Neubauten', I think it's a very ironic decision. "

With a first webcast on May 9, 2019, Einstürzende Neubauten started the fourth phase of the Supporter's Project with the aim of releasing an album for the band's 40th anniversary in 2020. Unlike in the previous phases, an existing platform for crowdfunding was used with Patreon . On May 15, 2020 the album Alles in Allen was released.