from Wikipedia, the free encyclopedia
This is the spotted version , flagged on August 8, 2020 . There is 1 pending change that has yet to be viewed.

The title of this article is ambiguous. Further meanings are listed under Heiner Müller (disambiguation) . 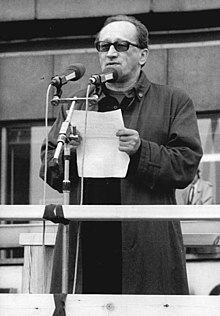 Heiner Müller speaks at the Alexanderplatz demonstration on November 4, 1989

Reimund Heiner Müller (born January 9, 1929 in Eppendorf , Amtshauptmannschaft Flöha , Saxony ; † December 30, 1995 in Berlin ), pseudonym Max Messer , is one of the most important German-speaking playwrights of the second half of the 20th century and one of the most important writers of the GDR . He also gained importance as a poet , prose writer and essayist , interview partner and director , dramaturge , director and president of the Academy of the Arts Berlin (East).

Müller was born on January 9, 1929 in Eppendorf in Saxony. His parents were Kurt Müller, who was temporarily arrested as a social democrat in 1933, and Ella Müller (née Ruhland). In 1935 he started school in Bräunsdorf . From 1939 to 1947 he lived with his parents in Waren (Müritz) . He went to middle school in Waren. As a result of good grades, he got a vacancy in high school. According to his own statement, Heiner Müller was in the Hitler Youth from 1940. Shortly before the end of the war, he was drafted into the Reich Labor Service and the Volkssturm .

After the end of the war, Müller took his Abitur in Frankenberg , Saxony, where his father was mayor from 1947, and worked in a library and at the district office. In 1946 he joined the SPD , which shortly afterwards was forcibly merged with the KPD to form the SED due to Soviet pressure , but was soon excluded again due to a lack of commitment and unpaid membership fees. Müller's father became a SED member and functionary after 1946, but left the GDR in protest in 1951 with his wife and their second son, Heiner Müller's brother Wolfgang , who was twelve years younger than him .

From 1950 onwards, Heiner Müller wrote literary reviews for Sunday and the cultural-political monthly Aufbau . In 1951 he married Rosemarie Fritzsche. In 1953 the marriage ended in divorce. The two married again in the same year. In 1954 they were divorced for the second time. The daughter Regine comes from the marriage. From 1953 Müller wrote for the new German literature . In 1954 he became a member of the German Writers' Association (DSV). In 1955 he married the writer Ingeborg (called Inge) Schwenkner , b. Meyer. 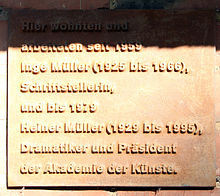 Memorial plaque on the house, Kissingenplatz 12, in Berlin-Pankow

From 1957 Müller held the position of a research assistant in the drama department in the DSV. During this time the first performance of his play Ten Days That Shook the World took place . In 1957/58 he worked as an editor for the FDJ magazine Junge Kunst , in 1958 he became an employee at the Maxim-Gorki-Theater in Berlin and a freelance author. In the same year the first performances of the pieces The Correction and The Wage Pusher followed .

The play Die Umsiedlerin was discontinued after the premiere in 1961 and Müller was excluded from the writers' association, which amounted to a professional ban. The director BK Tragelehn , with whom he had a longstanding friendship and intensive artistic collaboration, had to go into production to prove himself . During this time, Müller received support from Peter Hacks , Hanns Eisler and Hans Mayer . Inge Müller died of suicide in 1966.

Work for radio, DEFA and television followed, mostly under a pseudonym. In 1965, Müller was again criticized by the SED. The party canceled the performance of Der Bau . Müller wrote the plays Philoctetes (world premiere in Munich 1968) and translated Sophocles' Oedipus Tyrann for Benno Besson (world premiere at the Deutsches Theater Berlin in 1967). He owed the performance of his pieces above all to Benno Besson, the director of the Berliner Volksbühne in the 1960s, the directors Matthias Langhoff and Manfred Karge, and Ruth Berghaus , the director of the Berliner Ensemble (BE).

He married his third wife, the Bulgarian director Ginka Tscholakowa, in 1970. In the same year he became a full-time dramaturge at the BE, which amounted to the belated fulfillment of his lifelong dream. Müller's rehabilitation in the GDR can be traced back to the rigorous commitment of the director Berghaus to premiered his piece of cement against great resistance in the SED at the Berliner Ensemble. After completing his position as a dramaturge at the BE in 1977, he was immediately employed as a permanent author / dramaturge at the Volksbühne (until 1982). 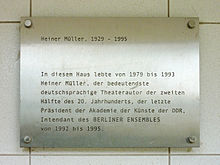 Memorial plaque on the block of flats in Berlin-Friedrichsfelde

The play Mauser , which is banned in the GDR, premiered in the USA in 1975 and in Cologne in 1980. Germania Tod in Berlin was premiered in 1978 at the Münchner Kammerspiele , Die Hamletmaschine in Paris (St. Denis) in 1979. In 1980 the marriage with Ginka Tscholakowa was divorced.

In 1982 the order was staged in Bochum. In 1984 Müller became a member of the GDR Academy of Arts . In the 1980s, Müller was in a relationship with the actress Margarita Broich . From the mid-1980s he worked on several projects with Robert Wilson , whom he had met in 1977. Both had a lasting influence on the work of the other. In 1988 Müller was reassigned to the GDR writers' association.

Since the late 1980s, Müller has also made a name for himself as a director. In his eight-hour production of Hamlet at the Deutsches Theater in Berlin in 1990, he integrated the Hamlet machine into the performance as Hamlet / Machine with Ulrich Mühe in the lead role. In the same year he designed a three-dimensional environment within the urban identity campaign Marking the City Boundaries (master plan: Daniel Libeskind ) in Groningen , which he dedicated to his friend Luigi Nono . In 1990 the city of Frankfurt am Main organized the 6th Festival Experimenta in honor of Heiner Müller with numerous guest productions of his pieces from Germany and abroad.

In 1990 Müller met the photographer Brigitte Maria Mayer . In 1992 the couple married. The daughter Anna is Heiner Müller's fourth child.

In 1992 Müller took over the management of the Berliner Ensemble together with Peter Zadek , Matthias Langhoff , Peter Palitzsch and Fritz Marquardt . In 1993 he directed the opera Tristan und Isolde in Bayreuth . His last production, Brecht's Arturo Ui , which premiered in June 1995 with Martin Wuttke in the leading role at the Theater am Schiffbauerdamm (Berliner Ensemble), is still running there today (over 400 performances). As the last president of the Akademie der Künste Berlin (East) (1990–1993), Müller endeavored to give it a European face.

On December 30, 1995, Heiner Müller died in Berlin from an esophageal cancer disease. 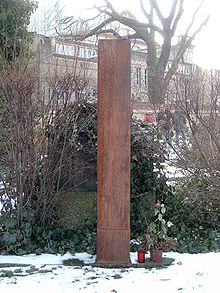 Grave of Heiner Müller in the Dorotheenstadt cemetery in Berlin

Heiner Müller's grave is in the Dorotheenstädtischer Friedhof in Berlin-Mitte.

On his 75th birthday in 2004, Howoge Housing Association unveiled a memorial plaque on his apartment block in Berlin-Friedrichsfelde .

In July 2013, a memorial plaque was also placed on the house where Müller had lived with his parents in Waren.

There is a bust of Heiner Müller at House II of the Martin-Luther-Gymnasium Frankenberg.

The reception Heiner Müller is characterized by (political) boundaries and through breaks in. Due to the publication and performance bans in the GDR, many of Müller's texts were first received in the Federal Republic. His view of things was undesirable in his own country; on average, his pieces did not appear on the stages of the GDR until fifteen years after their creation. While the eleven-volume edition (Rotbuchverlag, 1974–1989), which corresponds to the most precise understanding of Müller's text, was produced in the Federal Republic of Germany to this day, many texts remained closed to a broader public in the GDR until they collapsed. Due to the affair surrounding Müller / Tragelehn's resettler in 1961, when the Wall was built, Heiner Müller was systematically excluded from literary life in the GDR. With his expulsion from the GDR Writers' Association, Müller was stigmatized and the state censorship authorities from then on suspected.

It was not until the mid-seventies that selected pieces by Müller appeared with great delay: In 1975, a volume of pieces appeared in Berlin containing Der Lohndrücker , Die Bauern , Der Bau , Herakles 5 , Philoktet , Der Horatier , Weiberkomödie , Macbeth and Zement ; Two years later followed in another volume Die Schlacht , Traktor und Leben Gundling Friedrich von Preußen Lessing's sleep dream scream . The late rehabilitation - the award of the GDR National Prize First Class by Erich Honecker in 1986 - Müller himself saw as a sign of the approaching demise of the state in which it was so important to live, because the condition for his letter was: "The GDR is important to me because all dividing lines in the world go through this land. That is the real state of the world, and it becomes very concrete in the Berlin Wall. ”A compilation with plays that for the first time also included those dramas that had established Müller's international fame was only published in the GDR in 1988 (published by the theater scholar Joachim Fiebach ).

In 1989, the year the Berlin Wall came down, Frank Hörnigk published a collection of texts by Heiner Müller ( Heiner Müller Material ) that were created alongside his dramatic oeuvre and yet were in no way inferior to his pieces in terms of their poetic explosive power. The prose texts, essays, letters, poems and speeches gathered in this heterogeneous volume of material show the variety of designs of Müller’s writing and at the same time reflect his tendency to shatter traditional generic norms while maintaining absolute accuracy in the formulation. In the twelve-volume work edition published by Frank Hörnigk at Suhrkamp, ​​many new texts, published in remote locations or found in the estate, have been published in addition to the already known ones. At the same time, however, Müller's work has now been separated again according to the categories of "poems", "pieces", "prose", "writings" etc. which he has shelved, which is why this edition falls far behind the edition published by Rotbuch in terms of originality. Works and selected editions have also appeared in fourteen European countries as well as in Israel , Japan , Brazil , the USA and elsewhere.

Today, outside of Germany, Müller's pieces are still noticed particularly intensely in France , where a volume with Müller's manuscripts was published for the first time - a selection of sheets on the Hamlet machine edited by Jean Jourdheuil . A first critical edition of his texts was published by Suhrkamp from 1998–2008; however, all stage rights belong to the henschel Theaterverlag Berlin, whose establishment, following the example of the Frankfurt publishing house of the authors, in January 1990, Müller actively participated. The fact that Müller remained loyal to this publisher despite lucrative offers from other sources was due not least to his old ties with the former head of stage sales at the East Berlin publishing house , Wolfgang Schuch. The secondary literature on Heiner Müller is extensive and has been growing steadily since Genia Schulz's first German-language overview in 1980.

Since 1998 Frank Hörnigk has published the works of Heiner Müller, taking into account the holdings of the Foundation Archive of the Academy of the Arts Berlin (Heiner Müller's estate) at Suhrkamp.

President of the Academy of Arts of the GDR