The Berliner Morgenpost is a daily newspaper from Berlin founded in 1898 . It appears daily and has been part of the Funke media group since 2014 . The sold circulation is 52,503 copies, a decrease of 70.9 percent since 1998. 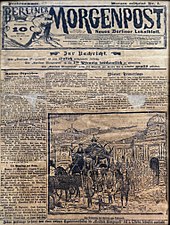 The first edition appeared on September 20, 1898. Its founder and publisher was Leopold Ullstein , under whom the Berliner Morgenpost grew into one of the largest daily newspapers in Germany. In 1899 it already had around 160,000 subscribers.

While in the 1920s almost all newspapers practiced clearly recognizable opinion journalism , the editors of the Berliner Morgenpost were characterized by interpretative journalism until the end of the Weimar Republic , in which attention was paid to neutrality and political balance. During this time, the newspaper received an enormous number of readers and advertisers. There is evidence that thousands of subscribers switched , because of one-sided reporting and increasing politicization, in particular from the Berliner Volks-Zeitung , the Berliner Morgen-Zeitung and the Berliner Tageblatt zu Ullstein, making the Berliner Morgenpost the highest-circulation newspaper in developed during the Weimar Republic. Until recently, the editors at Ullstein Verlag practiced impartial journalism.

After the " seizure of power " by the National Socialists , Ullstein Verlag was gradually " Aryanized " in 1933 and renamed Deutscher Verlag in 1937 . Several Jewish employees were dismissed, driven into emigration or later deported to concentration camps, such as Paul Hildebrandt (1870–1948) and Elise Münzer (1869–1942). In 1939 the Berliner Morgen-Zeitung , in 1943 the Berliner Allgemeine Zeitung and in 1944 the Berliner Lokal-Anzeiger and the Berliner Volks-Zeitung were merged with the Berliner Morgenpost . The Berliner Morgenpost remained one of the highest-circulation newspapers during the Nazi era and was one of the few that appeared until the end of World War II . In 1944 it had a circulation of 582,300 on weekdays and 772,300 on Sundays.

After the war ended in 1945, all German newspapers were banned by the Allied Control Council . Newspapers without license remained to the award of press freedom forbidden 1949th In September 1952, Rudolf Ullstein , a son of the publisher's founder, founded the Berliner Morgenpost , which was published by the restored Ullstein Verlag .

In the mid-1950s, the publisher got into a serious financial crisis. In 1956 Axel Springer acquired a 26% stake in Ullstein AG. The purchase went hand in hand with the agreement to increasingly use the printing and sales capacities of the Ullstein and Springer companies jointly. In 1959, Axel Springer acquired the majority of the shares.

In May 1959 the foundation stone for the new printing and publishing house was laid in the middle of the former Berlin newspaper district . Construction work began on August 13, 1961, under the eyes of GDR border soldiers behind the wall that was erected in the immediate vicinity . Months before the official inauguration of the Axel Springer high-rise in October 1966, the editorial staff of Berliner Morgenpost moved from the Tempelhof printing house to the new Axel Springer high-rise .

Advertising board for the Berliner Morgenpost in Berlin

With the takeover of Axel Springer, Berliner Morgenpost pursued a conservative and anti-communist direction from then on. In-house, Springer set four goals that all editors of his newspapers had to observe and pursue in their reporting:

On May 1, 2014, the Funke media group took over the newspaper. The Berliner Morgenpost continued to receive content from around the world until August 31, 2015, and since then has received the national content from the Funke Zentralredaktion .