The Hamburger Abendblatt is a Hamburg daily newspaper of the Funke media group , which appears Monday to Saturday. The paid circulation is the Bergedorfer newspaper together 151,220 copies, down 51.1 percent since the 1998th

The editorial focus is on reports from Hamburg and the surrounding area. Regional supplements are produced for the Harburg district , the Pinneberg and Stormarn districts as well as the city of Norderstedt and the corresponding partial editions are also sold.

The brand of the “Sunday” newspaper published between 2006 and 2007 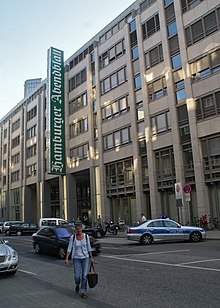 Entrance of the publishing house on the Caffamacherreihe, which was used until 2015

Four Hamburg newspapers previously had the word "Abendblatt" in their title, including a Hamburger Abendblatt that was founded on May 2, 1820. Apart from the fact that they have the same name, they are in no way related to today's Abendblatt , which was founded by Axel Springer after the Second World War and was published by Springer Verlag for over sixty years .

On October 14, 1948, the first evening paper was published with a circulation of 60,000. Axel Springer had received a license for this from the Hamburg Senate under Mayor Max Brauer . The Abendblatt was thus the first daily newspaper in Germany to receive a “German” license and not be licensed by the Allied agencies. A quote from the Hamburg poet Gorch Fock, “To embrace the world with home in your heart” has been used as a motto since the company was founded. After six months, 170,000 copies were already being printed every day.

On October 26, 2012, Axel Springer AG announced that the editorial team of the Hamburger Abendblatt had formed an editorial community with those of the newspapers Die Welt and Berliner Morgenpost before the end of the year . The Hamburger Abendblatt then obtained its national content from Die Welt and created the local sections of Welt , Welt am Sonntag and Welt Kompakt .

On May 1, 2014, Axel Springer SE sold the Hamburger Abendblatt together with the Berliner Morgenpost and some magazine titles to the Funke media group. The Abendblatt continued to receive content from around the world until April 30, 2015, and since then it has received the national content from the Funke Zentralredaktion . In April 2015, the Hamburger Abendblatt moved from the Caffamacher series to the Große Burstah .

Since 2014, the circulation has been reported together with the Bergedorfer Zeitung , the last separate circulation report for which was 15,595 copies. The number of copies sold has fallen by an average of 4.7% per year since 2014. Last year the decrease was 7.4%. It is currently 151,220 copies. This puts the Hamburger Abendblatt ahead of the local competition from Bild Hamburg (134.451) and Hamburger Morgenpost (40.266). The share of subscriptions in the circulation sold is 74.5 percent.