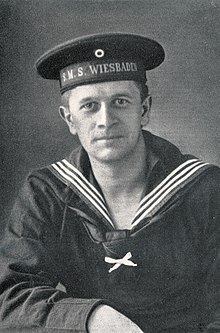 Memorial plaque in front of the Gorch Focks family home

Johann Wilhelm Kinau was the first of six children of the deep sea fisherman Heinrich Wilhelm Kinau and his wife Metta, b. Holst, born on the Hamburg part of the former Elbe island Finkenwerder . He had two brothers, Jakob Kinau and Rudolf Kinau , who have gained their own importance as Low German authors and local poets. Johann Wilhelm Kinau also went to school in Finkenwerder. After getting seasick on the first trip with his father, who worked as a deep-sea fisherman , in 1895 he began a commercial apprenticeship with his uncle August Kinau in Geestemünde (now part of Bremerhaven ). 1897 to 1898 he graduated from the commercial school in Bremerhaven. From 1899 he held various brief positions as an accountant and clerk in Meiningen , Bremen and Halle (Saale) . His numerous visits to the court theater in Meiningen inspired him to write. In 1904 he returned to Hamburg and worked for the central purchasing company of German colonial goods dealers until he became an accountant for the Hamburg-America Line in 1907 .

Since 1904, he has published numerous mostly in his native language , a wide finches will step Platt German , wrote poems and stories under the pseudonyms Gorch Fock , Jakob Holst and Giorgio Focco that appeared in the Hamburg newspapers. The first name Gorch is therefore a local variant of Georg . Fock is borrowed from a line of grandparent ancestors.

In 1908 he married Rosa Elisabeth Reich, with whom he had three children. “The man's best comrade is his comrade”. His muse and soul mate, however, was the actress Aline Bussmann during his writing years .

In 1913 his best-known work was published, the High German novel with a Low German dialogue “ Seafaring is not! “, In which the life of the deep-sea fishermen on Finkenwerder is described in a heroic way. The hidden function of leitmotifs from the White Horse Rider by Theodor Storm was developed by Robert Wohlleben pointed out. From 1914 he published nationalist Low German war poems, which were mainly directed against the war opponent England.

Gorch Fock's estate administrator Aline Bußmann and his cousin Hinrich Wriede are said to have written their own contributions to Gorch Fock in a tone that aimed at "glorifying" him. They also contributed to the later appropriation of his works by the National Socialists . Hinrich Wriede is said to have stylized Gorch Fock in his memory in the memorial book Gorch Fock und seine Heimat, von Deich und Dünung in 1937 as a “hero of the First World War” and a “pioneer of National Socialism”. According to Dirk Hempel, Aline Bußmann gave the leitmotifs of the writer's posthumous reception as early as 1918 in the publication of Sterne überm Meer : “Enthusiasm for the sea, war and hero myths, supposedly Germanic, Nordic and typically German traits.” Especially motifs such as “Heimat ”And“ Kampf ”made Gorch Fock popular in the Third Reich. In 1934 his works had a total print run of 700,000 copies and his texts became reading material in school books.

According to Günter Benjamin's biography of the writer, Gorch Fock , published in 2005 . Poet with a heart for the sea , Gorch Fock was undeniably a nationalist , but not a racist or anti-Semite . Reinhard Goltz attests Gorch Fock for "racist potential for meaning ... only beginnings". "Pronounced anti-Semitism" shows itself "only very scattered" with Gorch Fock.

The following objects in Germany are named after Gorch Fock:

On the occasion of his 70th birthday, Rudolf Kinau wrote the dialect radio play Gorch Fock - Söbentig Joahr , which NWDR Hamburg produced under the direction of Hans Freundt and which aired for the first time on August 19, 1950. The speakers were u. a. Arnold Risch , Aline Bußmann , Eduard Marks and Hartwig Sievers .