The Gorch Fock , in literature sometimes as Gorch Fock I referred, as is a Bark rigged sail training ship . It was built in 1933 by Blohm & Voss for the Reichsmarine and named after the writer Gorch Fock . The unseaworthy sailing ship has been in the Stralsund harbor since 2003 .

From 1951 to the early 1990s, the ship sailed under the name Tovarishsh ( Russian Товарищ , German comrade , German transcription Towarishch , scientific transliteration Tovarišč ) in the Soviet merchant navy. The ship is currently owned by the German association Tall-Ship Friends .

The Gorch Fock is the type ship of a class of six sailing training ships , which also includes the German Navy training ship of the same name , built in 1958 . To distinguish the ships, the year of construction is sometimes added in brackets, or a 1 or 2 in brackets, but these do not belong to the ship's name. 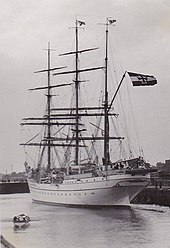 The client for the construction of the ship was the German Reichsmarine , which needed a replacement for the Niobe . Construction was commissioned by Blohm & Voss on December 2, 1932 under number 495. The Flottenbund Deutscher Frauen and the German Flottenverein had suggested a "People's Donation Niobe ", which was used for the construction. After 100 days of construction, the ship was on May 3, 1933 on the name of Gorch Fock baptized . The godmother was Marie Fröhlich, the chairwoman of the Fleet Union of German Women. The baptismal address was given by the chief of the naval command, Admiral Erich Raeder . On June 27, 1933, the ship was put into service. Nine officers and 56 non-commissioned officers and men made up the regular crew. The ship had space for 198 midshipmen . Various training trips also took the ship abroad. A delegation of the Gorch Fock took u. a. on August 13, 1934 took part in the memorial service for the German occupation of UC 57 who fell in November 1917 . A memorial stone was unveiled at a celebration on Hamnskär .

From November 7, 1935, the Gorch Fock drove under the new Reich war flag . Home port became Stralsund. In 1937 the ship received an additional gaff on the mizzen mast , dividing the sails into the new sails 21 and 22. This measure was implemented at Horst Wessel before it was launched because this form had proven itself at Gorch Fock .

Since 1939 the Gorch Fock and her two sister ships Horst Wessel and Albert Leo Schlageter were mainly used as stationary living ships and only alternately as training ships . The Gorch Fock was in Swinoujscie in 1942 and in April 1944 in Kiel as a barge. On April 24, 1944, the Gorch Fock was towed from Kiel to Rügen . Before Lauterbach was anchor cast. The ship was under the 1st ship regiment in Stralsund. The two sister ships sailed the Baltic Sea and the Greifswalder Bodden for training purposes . On October 1, 1944, the Gorch Fock was hauled into the Stralsund harbor; Because of the poor heating possibilities, the ship was first heated by a steam engine and later by a locomotive .

In the spring of 1945 the Red Army approached Stralsund. The barque was towed out of the harbor on March 9, 1945 to a berth off the Drigge peninsula . It is still unclear why the ship was not used to move soldiers to the west. On April 27, 1945 the Gorch Fock was decommissioned and partly dismantled. The equipment was stored in boat sheds on Dänholm . Only a small crew remained on board the ship under the leadership of the master's mate Karl Köhnke. Probably at a briefing on April 29, 1945, at which the approach of the Red Army and chaotic conditions in Stralsund and on all access roads were determined, the decision was made to sink the Gorch Fock so that it would not be left to the Soviet Army. On April 30, 1945, an advance detachment of the Soviet Army was in sight of the Gorch Fock in front of Devin . At about 12.30 p.m. that day, the Soviet tanks standing at Devin were fired at. The Gorch Fock received three shell hits during the 45-minute bombardment, with the rigging and hull slightly damaged. On the morning of the same day, the Germans brought explosives on board. This was ignited by means of fuses. The ship sank at 2 p.m. at position 54 ° 17 ′ 28 ″  N , 13 ° 8 ′ 22 ″  E in Strelasund , with the masts still clearly visible. 54.291111111111 13.139444444444

Towarishch (right) with Kruzenshtern and Dar Pomorza in Portsmouth Harbor (1974)

After the end of the war, the Gorch Fock was awarded as a reparation payment by the Soviet Union . The Stralsund company "B. Staude Ship Recovery ”; the rescue costs were estimated at 450,000 Reichsmarks . Contrary to previous practice, the ship was to be salvaged with upright masts. Work began in March 1947.

Since the small Stralsund company was not up to the task, the “Bergungskontor” was founded on May 12, 1947 as a regional company in Stralsund. In June 1947 the ship could finally be lifted. It was brought to Stralsund and cleaned, the inventory being brought on board a barge and later sunk in the Greifswalder Bodden . The total cost of salvage and cleaning came to RM 800,000  . In autumn 1947 the ship was transferred to the Neptun shipyard in Rostock . The ship was repaired there and in Wismar . In Wismar the ship was named Товарищ ( Towarishch , in German: "Comrade" or "Comrade") in September 1949 .

On June 15, 1951, she was put into service as a sailing training ship for the Soviet Navy with her home port in Kherson on the Dnieper . The Towarishch made a world tour in 1957 and won Operation Sail in 1974 and 1976 respectively .

Since there was a lot missing after the war, the brass ring, which stabilizes the large wooden steering wheel, was simply turned by 180 °. This led to the curiosity that the Soviet Navy drove the name engraved on the brass ring and the German Navy slogan "God with us" around the world for the entire period of operation of the ship, but did not know this because the engraving was now on the The wood of the steering wheel.

After the dissolution of the Soviet Union, the ship became the property of Ukraine and its merchant navy in 1991 ; however, it was deactivated in 1993 due to lack of money. In 1995 she sailed for the last time, this time from Cherson to Newcastle upon Tyne , where private sponsors wanted to repair the ship. This venture failed because of the high costs.

In 1999, the Towarishch , meanwhile in a relatively bad condition, was brought to Wilhelmshaven with the support of the German association Tall-Ship Friends , where it served as the flagship of Expo 2000 . 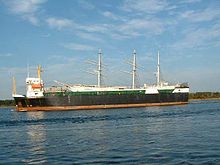 Transfer to Stralsund with the dock ship Condock V (October 2003)

After the last berth of the Gorch Fock was Stralsund until 1945, she returned there in 2003 and is now anchored in the Stralsund city harbor under the name Gorch Fock I at the so-called “ballast box”.

In 2003 the association "Tall-Ship Friends" acquired the ship from the Ukrainian Ministry of Education. Stralsund's Lord Mayor Harald Lastovka and the shipping journalist Peer Schmidt-Walter had campaigned for the Gorch Fock to anchor again in her old home port - an offer that the association also accepted. After four years of repair work in Wilhelmshaven, the ship was transferred to Stralsund in October 2003 with the dock ship Condock V ; the transport costs were 100,000 euros. In the Volkswerft Stralsund , swimming safety was restored and the ship was christened Gorch Fock on November 29, 2003 by Rosemarie Schmidt-Walther from Stralsund, in the presence of a grandson of the namesake and thousands of Stralsunders . The owners' association “Tall-Ship Friends” assumed a financial need of several million euros in order to be able to put the ship back into operation, but was confident that it would raise this money through donations and entrance fees. In addition to the necessary financial requirements for repair and restoration, the problem is that the Gorch Fock, with its length of significantly more than 55 meters, is not subject to the regulations of the Traditional Ship Ordinance , but only as a ship according to the regular conditions of the International Maritime Organization ( IMO) could be put back into service.

Repair and restoration work began in 2004. The development association Gorch Fock set up a ship museum on board with job creation measures by the Federal Employment Agency , all cabins in the tween decks were dismantled, unusable technology was disposed of and a galley was rebuilt. The Gorch Fock was registered under the number 3675 in the German shipping register with her home port Stralsund. In 2005 the engine room was completely cleared and four auxiliary diesel engines with 180 hp each were purchased. In 2005, the dismantling work was completed and 37,000 people visited the ship. In November 2008, the ship was checked for damage at the Stralsund shipyard. 200 square meters of steel were used to repair damage below and above the waterline; the painting of the hull was renewed. In November 2009, the renovation of the decks of the Gorch Fock began. 60 square meters of the 250 square meters hut deck (the rear raised deck) were replaced by new steel plates.

In March 2010, the dismantling of the 82-meter-long ship had visibly progressed, and the ship had to be re-equipped so that it could then be put back into operation. In the first step, the aim is to obtain a license to sail under the German flag for the Baltic Sea , which, according to Germanischer Lloyd and the See-Berufsgenossenschaft, is possible. Around four million euros are required for the completion for day-to-day operation and the driving permit. In the second step, with the cost of day trips in the Baltic Sea being covered for operating costs, the ship is to be further expanded for trips lasting several days with trainees , for which around three million euros are estimated. Whether the "old lady" will set sail again or stay stationary in the city port of Stralsund depends on whether the necessary funds can be brought in at least for the first planning step. In addition to the paid ship inspection, “rig training” is also carried out and the rooms on board are rented out for events and celebrations. In addition, the ship serves as a venue for civil weddings and subsequent wedding celebrations.

During the restoration work, the original brass ring, which stabilizes the wooden steering wheel, was turned over again, so that the name engraved there and the German Navy saying "God with us" can be read again.

The number of visitors in 2011 fell sharply compared to the previous year; In the summer of 2011, 10,000 fewer people visited the ship than in the previous year, which meant a drop in income of 40,000 euros.

On March 28, 2014, the city of Stralsund announced that they wanted to hold talks with the owners' association “Tall-Ship Friends” about selling the barque to the Hanseatic city; previously it was often said that the barque could move to Rostock. On March 1, 2016, the ship was added to the list of monuments of the state of Mecklenburg-Western Pomerania . In September 2018, the Stralsunder Ostsee-Zeitung reported on the city's purchase plans. Including the necessary renovation, almost eight million euros would have to be raised, according to the newspaper's report. On November 8, 2018, the citizens of Stralsund spoke out in favor of buying the ship. The city assumes a purchase price of 950,000 euros. The swimming ability certificate, which was renewed in 2015, expires in 2020.