The term traditional ship has two different meanings. In the vernacular , "traditional ships " are older ships and boats that have largely been preserved in their original condition or have been restored to such a condition, but do not necessarily represent an original condition of their history. Also, museum ships , such as the MS Dresden as "Historic Ship Type Peace" (name used from 1970 to 2013), are commonly included.

In addition, "traditional ship" is a legally binding term in several countries for - usually older or traditionally operated - ships that have to meet requirements for safety certificates and certificates of competency of the crew members that differ from today's standards in order to maintain the shipping tradition. B. regular commercially operated ships would have to.

Traditional ships are maintained by museum harbors , individuals or operating companies and associations of different legal forms in often laborious work in order to provide insight into earlier epochs of shipping , shipbuilding or seamanship (see also the history of seafaring ).

The political mandate to the European governments is documented, among other things, in Recommendation 1486 (2000) of the European Parliament and reads:

"The Assembly therefore recommends that the Committee of Ministers: ... support and encourage public and private bodies and voluntary associations which preserve historic vessels, or life-size or large scale replicas, in working order; encourage the display and use of these vessels for the education and enjoyment of the general public; encourage further development of a system of mutual acceptability by the maritime authorities of nation states of standards for the safe operation of traditional vessels in European waters. " 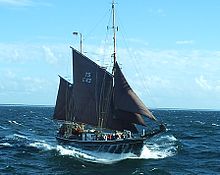 In Germany, the term "traditional ship" as well as its approval and operation is regulated in Annex 1a Part 3 of the Ship Safety Ordinance. Traditional ships are historical watercraft, the presentation of which is of public interest while in motion. Historic watercraft are ships that:

Traditional ships require a safety certificate of by the Maritime Safety Regulation Ship Safety of the BG Verkehr . With this certificate the operators are allowed to operate their ships non-commercially by conveying historical ship operating technology and traditional seamanship to passengers on board.

Skippers of traditional ships do not require professional patents ("certificates of competence") according to the international STCW agreement , but depending on the size, number of passengers and area of ​​travel, a recreational boat license for the lake, a sports lake or a sports high seas license ("certificates of proficiency"). For traditional ships with a hull length of 25 m or more, the skipper or machinist must make an additional entry in his or her sport lake or high seas boat license. The technical requirements for these additional entries are determined by the Joint Commission for Historic Watercraft (GSHW e.V.), the German umbrella organization for traditional ships . The regular crew for the traditional ships can be found in Appendix 4 of the Sportseeschifferscheinverordnung .

According to the AGMD (Association of German Museum Ports) and the GSHW , the number of approved traditional ships fell from 150 in the 2000s to 105 in 2013.

The term “traditional ship” is not more closely defined in Switzerland by laws or ordinances. Nevertheless, the Salomon was described as a special case in the context of Swiss seafaring in its maritime letter as "Traditional Ship, Sailing Vessel with Auxiliary Engine". This is an individual decision that was made on the basis of the following circumstances: As part of the approval of the Salomon , the responsible Maritime Administration of the Federal Department of Foreign Affairs faced the problem that the ship was not subject to the Swiss Yacht Ordinance due to its size and planned area of ​​operation. However, with Article 35 paragraph 1 of the Swiss Maritime Law, it is possible to register a seagoing vessel in the same way as a commercial merchant ship. Such registration assumes that the owner and company are domestic and operate the ship with a philanthropic , humanitarian, scientific, cultural or similar purpose. This was seen after review. Since there are no corresponding guidelines in Switzerland itself, the inspections as part of the safety inspections and maintenance are carried out with the assistance of an expert in the field of traditional ships who is publicly appointed and sworn in Germany. This is based on the German "Safety Guidelines for Traditional Ships" in its work.

The technical approval of inland waterway vessels is regulated by the “Technical Regulations for Inland Waterways” Directive 2006/86 / EC.

This EC guideline contains - currently (February 2009) - still empty chapter 19 "Historical watercraft". The JWG of the Central Commission for Navigation on the Rhine and the European Commission have various national drafts for this chapter, some of which were created with the cooperation of the respective national umbrella organizations for traditional ships (for Germany with the cooperation of the GSHW and the German Maritime Museum), as well as a draft of the Inland Vessel Council of the European umbrella association of traditional ships EMH.

The national implementation of the EC Directive in German law is the "Ordinance on Ship Safety in Inland Shipping" (Inland Ship Inspection Ordinance) of December 6, 2008 ( Federal Law Gazette I p. 2450 ) plus the annex. Here the “historical watercraft” of the EU directive is listed under the term “traditional vehicle” as a subordinate term for passenger ships. (Definition and chapter without content).