Bowsprit of the Alexander von Humboldt in sunrise 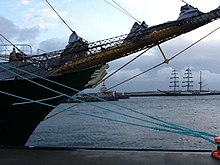 The ship was planned and commissioned in 1906 as a reserve lightship Reserve Sonderburg by the hydraulic engineering department of the Prussian Ministry of Public Works . On September 10, 1906, it was launched at Bremen's Weser shipyard, later AG Weser , with construction number 155. It was the first of four sister ships; the other three were the Norderney (I) (now a museum ship in Wilhelmshaven ), the Norderney (II) and the Amrumbank (I) (both destroyed in the Second World War). The ship was used after completion by the Flensburg hydraulic engineering office.

As with many other lightships, the planning basis was a seaworthy sailing ship hull (often named after the leading designer at Tecklenborg , Georg Wilhelm Claussen , "Claussen hull"), but on which instead of three normal sail masts two sail masts (fore and mizzen mast) and a lamp post was placed on the main mast position. Lightships of this time were rigged as schooners, i. that is, they had the appropriate sails on board for all masts. Like all lightships it was painted red and had white letters.

In the course of the conversion to a training ship with a barrage rig, it received a long poop deck to accommodate the crews, new rigging , a longer jib boom, a green paint and sails, and additional iron ballast in the hull. The sailing ship has been called Alexander von Humboldt since 1988.

The purpose of a reserve lightship was to represent a “parent” lightship during the annual docking times. Exactly what name it was baptized is not entirely clear; Both the name Reserve Fehmarnbelt (after the first place of deployment) and Reserve Sonderburg (also Reserve.Sonderburg with name Reserve , home port Sonderburg) appear. On the basis of the ship's bell, however, the last-mentioned possibility, i.e. simply a reserve with home port Sønderborg, is most likely to be assumed.

It was used as a reserve fire ship from 1906 to 1939 at the stations "Adlergrund", "Jasmund" (until 1925), " Fehmarnbelt " (1st place of operation), "Gabelsflach", " Kiel ", "Kalkgrund / Flensburg", "Amrumbank" and "Außeneider". During the First World War it was used as a war light ship East on various Baltic Sea stations.

On January 4, 1957, the Finnish motor ship Satu collided with the lightship Kiel . In order to prevent sinking due to ingress of water, the lightship was towed into shallow water and put on the ground there. On January 13, 1957, it was lifted and then repaired and modernized in the state shipyard in Rendsburg-Saatsee, before it took over the lightship position "Kiel" again in 1959.

After commissioning of the newly built lighthouse Kiel fire ship left the station July 5, 1967, was as a reserve lightship Kiel the Water and Shipping Authority Lübeck assumed. It was mainly used for stations in the North Sea ("Elbe 1", "Weser", "Borkumriff", "P8", "P12", "German Bight"), but also in the Baltic Sea ("Fehmarnbelt").

On September 21, 1983, the ship went to the Wilhelmshaven Waterways and Shipping Authority , which it used from October 10, 1983 after the Amrumbank (II) lightship was decommissioned as its replacement at the "German Bight" station. In 1986 it was used as the Elbe 1 Reserve and Weser Reserve (July 8, 1986). On September 17, 1986, the Liberian motor ship Ocean Wind collided with the lightship lying on the “Weser” station. Due to the damage suffered in the process, it was decommissioned on September 23, 1986, later repaired in Wilhelmshaven and transferred to Bremerhaven as Confidentia . The vacant "Weser" station was taken over by the fully automatic lightship FS1 .

After it was decommissioned, the lightship was bought on September 30th by the " German Sail Training Foundation ", a foundation to promote sailing for young people (supported by the automobile haulier E. H. Harms GmbH & Co. and the Beck & Co. brewery). The "German Foundation Sail Training" is organized in the Sail Training Association Germany (STAG), a national association of sailing training ships. With a lot of initiative and in cooperation with MWB Motorenwerke Bremerhaven, she had the ship converted into a tall ship (barque) according to plans by the Polish naval architect Zygmunt Choreń for 2.2 million  DM . As a reference to the sailing ships of the Rickmers Reederei , the hull was painted green.

After the test run on March 3, 1988, the finished ship was christened Alexander von Humboldt after the German naturalist on May 20, 1988, and thus the official commissioning by the "German Sail Training Foundation". The lantern of the lightship was set up in front of the Kiel Maritime Museum (in the former fish hall directly at Kiel harbor).

Since her reconstruction, the Alexander von Humboldt has covered well over 300,000  nautical miles , which is roughly fourteen times the circumference of the equator. The highlights of the year were the Tall Ships 'Races (formerly Cutty Sark Tall Ships' Races ), regattas in which tall ships and especially their youthful teams from all over the world meet, as well as the winter trips around the Canary Islands . In summer the ship mainly sailed in the North and Baltic Seas. The Alexander von Humboldt also served as a “ windjammer for the youth” as a training ship for paying guests of all ages who want to learn to sail on tall ships.

One of the longest journeys took the Alexander von Humboldt on von Humboldt's footsteps (in memory of his South American expedition 200 years ago from 1799 to 1804) to South America and the Caribbean from October / November 2003 to May 2004. To celebrate the commissioning before 100 Years ago, the Alexander von Humboldt started another trip to South America in autumn 2005. The individual stops on the anniversary trip were Bremerhaven, St. Malo , Lisbon , Canary Islands , Cape Verde Islands , Rio de Janeiro , Buenos Aires , Ushuaia ( Tierra del Fuego ), Valparaíso , Callao , Balboa ( Panama Canal ), Havana , Bermuda , Azores , St. Malo and again Bremerhaven. As part of this voyage, the ship passed Cape Horn , the southern tip of South America, on January 13, 2006 at 7:03 am local time under the leadership of Captain Klaus Ricke . The Alexander von Humboldt was the first tall ship (and until January 2011, when the Gorch Fock circumnavigated the Cape, the only one) flying the German flag to circumnavigate Cape Horn since 1949. She passed the Cape under sail in an east-west direction, despite wind force 10  Beaufort , in gusts 11 Beaufort, from the west. On January 14, 2006, the crew landed on the island of Hoorn, signed the visitor's book of the weather station of the Chilean Navy and visited the Cape Horn memorial for the seamen who died in this sea area. A crew that was replaced on January 17, 2006, managed to land again on the famous rock two days later under Captain Ulrich Lamprecht.

In July 2011 she won the Tall Ships Race from Lerwick to Stavanger in class A (tall ships) under captain Mike Vosgerau .

Due to the constantly growing safety requirements and the associated increasing maintenance and servicing costs (up to 500,000 euros per year), the ship became too expensive for the owner and was therefore decommissioned on October 9, 2011. The foundation's successor is Alexander von Humboldt II .

At the end of December 2011, the ship was sold to a Bremerhaven entrepreneur, transferred to Freeport in the Bahamas from January 10, 2012 and initially used there for tourist sailing tours from March 2012 - with a local crew. After the concept - sailing tours around the Bahamas - didn't work out, it was transferred to a shipyard in Seville in the Mediterranean for overhaul . It was located there between mid-March and the beginning of April 2013. Because the technical conditions there were not suitable for overhauling a sailing ship, it was transferred to Bremerhaven at the beginning of May. From September 2013 it was then available in Bremerhaven. In July 2014 it was bought by an entrepreneur from Goslar , who had the ship converted into an event and hotel ship with catering. The Alexander von Humboldt had been in the Europahafen Marina since April 18, 2015 and moored at her final berth on the Schlachte in Bremen on October 24, 2016 .