The Beaufort scale ( Bft ) is a scale for dividing the wind strength into 13 strength ranges from 0 ( calm ) to 12 ( hurricane ), which is not based on exact measurements, but on the observed effects of the wind. It is named after Sir Francis Beaufort and is a widely used system for describing wind strength. 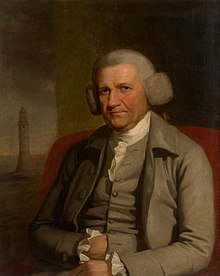 The engineer John Smeaton developed a measuring method for the first time.

The Beaufort scale does not come from Francis Beaufort (1774–1857). Already Tycho Brahe had tried to categorize the winds. The engineer John Smeaton first characterized them by their effect on windmill blades . His table, published in 1759, contained eleven wind strengths (not counting windlessness). He described each wind strength by its effect on the environment, for example that a hurricane uproots trees and destroys buildings. For this purpose he indicated the wind speed and the wind pressure. In a manuscript from 1790, the values ​​of the Smeatons scale are reworked into nine wind speeds, which were characterized by their effect on a windmill. For example, a “breeze” was defined as being able to move the branches of a tree and a mill wing making six to nine revolutions per minute.

Large trading companies such as the East India Company and the Kriegsmarine systematically evaluated the logbooks of the returning captains during Beaufort's time, among other things in order to obtain information on favorable wind conditions. The remarks that were customary at the time, such as “moderate wind”, were not standardized and therefore not comparable. The problem was that wind at sea - aboard a sailing ship that moved with the wind - could not be measured absolutely. Various researchers therefore tried to characterize the wind by its effects.

The then hydrograph of the "East India Company" and from 1795 first hydrograph of the Admiralty , Alexander Dalrymple , made Smeaton's scale known in the seafaring world. Dalrymple's version contained twelve wind speeds (again without calm), ranging from 1 “weak draft” to 12 “storm”. Dalrymple published his own scale, expressly intended for use in log books, in a brochure in 1779 and in the book Practical Navigation in 1790 .

Beaufort probably already got to know Dalrymple's scale through his 1779 brochure. Throughout his life he kept an extensive diary in which, among other things, he recorded the weather. On January 12 or 13, 1806, he entered the words: “From now on I will estimate the strength of the wind according to the following scale, because nothing gives a more unclear idea of ​​wind and weather than the old expressions moderate and cloudy, etc. etc. “This is followed by a scale from 1 to 13, which ranges from“ calm ”to“ storm ”. On September 14, 1807 he started a new diary in which - as usual - he noted the wind scale on the flyleaf that he intended to use. Shortly afterwards, he improved the scale by adding how the wind force could be seen on the sails of a fully rigged frigate. For example, wind force 5 prevails when topsail , slab sails , royal, aviator and staysail can remain hoisted, with wind force 7 the three top sails must be reefed.

After Beaufort became the Admiralty's hydrograph in 1829, he passed his improved scale on to anyone interested. It was published in the Admiralty's Nautical Magazine in 1832 . In 1837 the scale was already in use throughout the surveying service, and at the end of 1838 the Admiralty issued an instruction making it mandatory. However, this scale had no name and was simply referred to as the "attached scheme". Even in the detailed obituaries on the occasion of Beaufort's death, a wind scale is never mentioned.

It was not until 1906 that the British Meteorological Service created the version of the scale with 13 levels (incl. 0), which has become known as the Beaufort scale (in the following table the scale including the column "Effect on land"). Here wind force 0, i.e. calm, is characterized by the fact that smoke rises vertically. With wind force 2, a "light breeze", the wind can be felt on the face and leaves rustle. The respective wind speed is specified for this. In this version, the Beaufort scale has been included in numerous dictionaries and encyclopedias. In 1927 the German captain Peter Petersen reformulated the original Beaufort scale for seafaring purposes because sails no longer played a major role in shipping. The Petersen Seegang scale describes the effect of the wind on the sea (in the table the scale together with the column “Effect on the sea”, see also the following images). So with wind force 6, "strong wind", large waves of 2.5 to 4 meters high form, extensive, white foam ridges can be seen everywhere; there is some spray.

After the successor organization, the World Meteorological Organization, reduced the expanded Beaufort scale back to the traditional 12-part scale in 1970, the 18-part scale, which was expanded by a further wind force, is now only available in Taiwan and on the Chinese mainland, which is also repeatedly affected by such wind forces utilized. There, wind force 17 is defined as super hurricane / super typhoon with 109–119 kn or 202–220 km / h and wind speeds beyond that ≧ 120 kn or ≧ 220 km / h are defined as hyper hurricane / hyper Called typhoons.

In 1971, Theodore Fujita of the University of Chicago published the Fujita tornado scale with the grades F0 to F12, especially for wind speeds of tornadoes that go beyond the Beaufort scale. suck "can. In addition, the seven- step Saffir-Simpson hurricane wind scale has been in use since 1972, dividing the actual hurricanes into five categories. The Japan Meteorological Agency and the two Regional Specialized Meteorological Centers in the north and south-west of the Indies use different cyclone scales. For the southern Pacific and the Australian region, the Tropical Cyclone Warning Centers there use the scale of the Australian Bureau of Meteorology , which is also based on an extension of the Beaufort scale .

All in all, however, there is no really binding version of this Beaufort scale - that is, including the description according to phenomenological criteria (see below) - so that it will continue to be used in many different variants. Professional meteorologists therefore always measure the wind speed directly with an anemometer and only use the Beaufort scale in an emergency.

Beaufort scale according to phenomenological criteria

According to the revision of the Beaufort scale in 1946, the following relationship exists between wind speed and Beaufort strength B [ Bft ] ( commercially rounded ):

or resolved according to B:

where v is the wind speed 10 meters above the surface. The first of the formulas was established as the national standard by the British Meteorological Service in 1913 and proposed as the international standard in 1914 (the proposal was rejected). It is based on a study by the later director of the weather service, Sir George Clarke Simpson, from 1905/6, which, however, was published on the basis of miles per hour. For other units the following applies approximately:

A simplified relationship is:

(This approximation leads to errors <0.5 Bft at wind strengths between 3 and 10 Bft. However, under practical conditions or when measuring with commercially available devices, this error is usually negligible.)

Since it is unusual to work with fractions or decimal fractions of wind strengths, it is important to calculate the lower and upper limits of the integer wind strengths using one of the formulas mentioned. The limit values ​​in the units of knots, km / h and mph are rounded to whole numbers and the values ​​in m / s to exactly one decimal place. Upper limits are reduced, lower limits are rounded up. Wind force 9 Bft, i.e. B between 8.5 and 9.4, corresponds to a wind speed between 20.7 and 24.4 m / s, 10 Bft corresponds to 24.5 to 28.4 m / s etc.

In fact, the calculation formula only represents the “lowest common denominator” in attempts at numerous international meteorological and geophysical conferences between 1914 (in Rome) and 1970 to create a common basis for a uniform weather forecast , since every seafaring nation since the sinking of the Titanic was obliged to disseminate current weather reports off their coasts. In addition to the limit value tables themselves, the subject of the negotiations was the respective measurement method, changing measurement heights or measurement times and other formalities. Agreement was first reached in 1926 with the Vienna scale , which was calculated from the arithmetic mean values ​​of the British Simpsons scale and the older international scale of the Deutsche Seewarte Hamburg . In 1946, the Simpsons scale from 1906 or 1913 was adopted as the so-called Paris scale , and then in 1947 it was expanded to describe hurricanes using the calculation formula up to wind force 17. This was then confirmed in 1949 as the Washington Code with the determination that wind speeds should be measured in knots . In 1960, the expansion to 17 (at times even unofficially to 23 wind speeds) was withdrawn, because aviation had completely dropped out of the Beaufort scale, meteorology developed its own hurricane scales and seafaring managed with 12 wind speeds.

In extreme cases or for storms on other planets, such as Mars , the wind speed is given directly in a suitable unit.

In search of what the third power of the formula for a practical meaning in addition to the square for the dynamic pressure, one comes across the section modulus in the cross section of bars under bending stress. It changes with the third power of the diameter for round or the radius of gyration for any cross-section. In the Beaufort sense, this leads to the practical and descriptive statement that can also be transferred to land objects, although shortened by further conditions: with the same sails, double the wind force breaks double the mast diameter.