Pacific is a redirect to this article. Additional meanings are listed under Pacific (disambiguation) and Pacific . 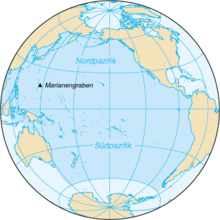 Map of the Pacific Ocean 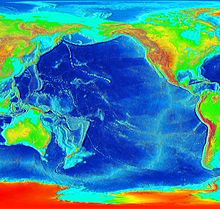 Elevation map of the Pacific Ocean

The Pacific Ocean ( Latin pacificus 'peaceful'), also known as the Pacific, Pacific or Great Ocean , is the largest and deepest ocean on earth and borders on all other oceans.

On November 28, 1520, Ferdinand Magellan , coming from the Strait of Magellan , reached the Pacific or the Pacific Ocean on his circumnavigation. He called it Mar Pacifico (Portuguese and Spanish for Peaceful Seas ) because the storms that had accompanied it until then subsided. Despite this name, there are also violent storms and cyclones in the Pacific, which are called typhoon (Northwest Pacific), hurricane (Northeast Pacific) or cyclone (South Pacific) depending on the region .

The Pacific Pole of Inaccessibility ( Point Nemo ), the point farthest from the mainland and islands, is located in the South Pacific between New Zealand and Chile.

Most of the marginal seas of the Pacific lie off the Asia - Australian side and are separated from the ocean by a chain of islands and deep-sea trenches .

Division of the Pacific island world into cultural areas 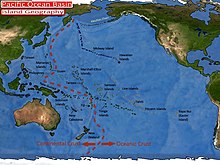 Geography of the islands of the Pacific

The countless islands of the South Seas are subdivided into the archipelagos of Melanesia , Polynesia and Micronesia , more culturally than geographically . With New Guinea, Melanesia is the second largest island in the world. New Zealand and the surrounding islands such as B. the chatham is usually counted to Polynesia.

Other larger islands and archipelagos outside these spaces, clockwise from the west:

Some of the larger islands and archipelagos on the edge of the Pacific are controversial in their assignment. These are Tierra del Fuego (Chile) and the offshore islands in the Drake Strait , which lie at the transition to the Atlantic, Taiwan and the Philippines , which lie on the edge of the South China Sea , and Tasmania (Australia), which is occasionally included in the Indian Ocean. Further south there are some Antarctic and sub-Antarctic islands such as Peter I Island , Scott Island and the Balleny Islands , which are generally included in the Southern Ocean .

Countries bordering the Pacific and its tributaries

Within the Pacific Ocean or on its bottom there are partly high and elongated mid-ocean ridges , many lower thresholds , huge deep-sea basins , deep-sea channels , various sea ​​lows and the Pacific ring of fire .

Pacific ring of fire , area with many volcanoes

The mid-ocean ridges include in particular the East Pacific Ridge , which stretches through the southeastern Pacific Ocean. The Mariana Trench with the (according to a controversial measurement from 1957) 11,034 m deep Witja Deep 1 and the Challenger Deep (10,984 ± 25 m according to measurements from 2010), the deepest parts of the Pacific Ocean, belong to the deep-sea trench. The deep-sea basins include the extremely large North Pacific Basin, which makes up most of the northern Pacific, even extends beyond the equator to the south and is only slightly traversed by the mid-ocean ridges and swells.

Some of the most powerful earthquakes of the 20th and 21st centuries took place at the Pacific Ring of Fire, an extensive ring of active volcanoes running around the ocean , connected to deep-sea channels , for example the Great Chile Earthquake in 1960 and the Great Kantō in Japan in 1923 Earthquake . Another danger are seaquakes , which can trigger meter-high tsunamis , such as the Sumatra-Andaman quake with the following tsunami on December 26, 2004 in which around 230,000 people were killed.

A vortex made of plastic swims about a thousand kilometers north of Hawaii and covers an area of ​​around 7,000 km² - about three times the size of the Saarland . There are repeated statements in which the area is greatly exaggerated - in some cases by a factor of 200 more than is actually the case. The plastic waste comes to about 80% from the mainland and is washed into the sea by rivers. The remainder comes from ships throwing their waste overboard. The plastic parts float in this vortex for up to 16 years and represent a great danger to the fauna. Due to the friction of the waves, the rubbish breaks down into smaller and smaller pieces, but does not completely dissolve. Microplastics have already been discovered in the Benthal of the Mariana Trench .

Important ports on the Pacific Ocean

Due to their location and size, the ports listed below represent the most important berths for ships of all kinds. The list is sorted by country from north to south.

On the American double continent

In Canada can be found in Vancouver , Kitimat , Prince Rupert and Victoria seaports important (all in the province of British Columbia ). The United States includes the ports of Anchorage , Valdez (both in the state of Alaska ), Seattle , Tacoma , Longview (all Washington ), Portland ( Oregon ), Richmond , Oakland , San Francisco , Los Angeles , Long Beach and San Diego (all California ). To the south of it, in Mexico , are seaports in Acapulco , Ensenada and Salina Cruz . The port of Panama City is located on the Panama Canal .

In South America , the port of Buenaventura is located in Colombia, and the port of Guayaquil in Ecuador . Peru has an important seaport in Callao . The following important ports are also located in Chile : Antofagasta , Arica , Iquique , Puerto Montt , San Antonio as well as Talcahuano and Valparaiso .

On the Asian continent 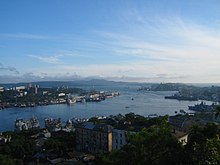 The most important Russian port on the Pacific is in Vladivostok , the South Korean counterpart is Busan . To the south there are ports on Chinese territory, including Dalian , Qingdao , Shanghai , Shenzhen , Tianjin , Xiamen and Yantai .

In Thailand there are important seaports in Bangkok , Laem Chabang and Songkhla . The port of Singapore is located at the southern end of the South China Sea .

In the middle of the Pacific on the islands of Japan are the seaports of Kobe , Nagoya , Osaka and Yokohama . The ports of Kaohsiung , Keelung and Taichung follow on from Taiwan . In the Philippines there are important berths in Cebu City and Metro Manila .

On the Australian continent

The Australian continent has four major ports: Brisbane , Melbourne and Sydney in Australia and Auckland in New Zealand .