The title of this article is ambiguous. Further meanings are listed under El Niño (disambiguation) .

El Niño ( Spanish for "the boy, the child", here specifically: "the Christ child" ; pl. The el niños) is the name given to the occurrence of unusual, non-cyclical, changed ocean currents in the oceanographic - meteorological system ( El Niño-Southern Oscillation , ENSO) of the equatorial Pacific . The phenomenon occurs at irregular intervals averaging four years. The name is derived from the time of occurrence, namely at Christmas time . It comes from Peruvian fishermen, who get to feel the effect economically because of the lack of schools of fish .

At Christmas time, the normal water temperature in the Pacific off Indonesia is 28 ° C, while that off the coast of Peru is only 24 ° C. The trade winds off Peru lead to the upwelling of cool water from the depths of the ocean. This upwelling is part of the Humboldt Current off the coast of South America. At El Niño there is less lift due to the weaker trade winds and thus the cold Humboldt Current gradually weakens and comes to a standstill. The surface water off the coast of Peru heats up so much that the upper water layer is no longer mixed with the cool and nutrient-rich deep water. That is why the plankton dies , which leads to the collapse of entire food chains . In addition, the larger amounts of evaporating water off the South American Pacific coast lead to very heavy rainfall on the west side of the Andes , which leads to landslides and flooding of the drainage waters ; this also affects the settlements of the residents.

The Eastern Pacific off South America is warming up, while off Australia and Indonesia the water temperature is falling. Due to the normally higher temperature in the western Pacific, there is a decrease in air pressure and in the colder eastern Pacific there is a high pressure area. This creates near-ground easterly winds that push warm surface water from the Pacific off South America towards the west to Indonesia. During an El Niño this air circulation, called " Walker circulation ", is reversed. The warm water layer flows from Southeast Asia to South America within about three months. The easterly winds favor the Kelvin waves , which now drive water in an easterly direction through the weak trade wind and raise the water level there by around 30 cm. El Niño is a natural climate phenomenon; in recent years the warm sea layer has continued to stop off the coast. It has not yet been clarified whether this is related to the anthropogenic greenhouse effect or to longer-term natural fluctuations in the Pacific, which at El Niño changes from a warm to a cold phase.

Weather patterns are affected on three quarters of the earth. Heavy rains occur on the Galápagos Islands and on the South American coast. These lead to flooding along the western coast of South America. There are even floods on the North American west coast.

In contrast, the rainforest in the Amazon region suffers from drought. Huge hurricanes can develop off Mexico and cause enormous damage. In Southeast Asia and Australia, the lack of rain leads to bushfires and huge forest fires. While there is more rain in East Africa in countries like Kenya and Tanzania , it is significantly drier in Zambia , Zimbabwe , Mozambique and Botswana (southern Africa).

There is a mass extinction of marine animals, sea birds and corals . The warming of the sea water causes the plankton to die off off the Peruvian coast. In normal years there was up to ten times as much fish here as on other coasts. At El Niño the fish cannot find anything to eat and migrate. The seal colonies can no longer find food and many animals are starving. The economic damage to people can hardly be quantified.

Due to the high temperatures, coral bleaching also occurs in the reefs in the areas that were previously spared.

With a few exceptions, such as the unusually cold winter of 1941/42 in Europe, Europe was spared the long-range effects of El Niño. However, an impact on the cold and snowy winter of 2009/10 in Europe and North America was discussed. In addition, the El Niño phenomenon has an impact on the Indian monsoons - in El Niño years precipitation is greatly increased, whereas the monsoon in La Niña years brings less precipitation with it.

Conditions for the occurrence of El Niño arose within the last 300 years in periods of 2 to 7 (or 8) years. However, most niños are rather weak. There is evidence of very strong El Niño events at the beginning of the Holocene , about 11,700 years ago.

El Niño affected the pre-Columbian Inca and may even have contributed to the demise of the Moche and other Colombian and Peruvian cultures. The first real record is from 1726. Another early record even mentions the term El Niño in relation to climate events in 1892. It is from Captain Camilo Carrillo from his report to the Congress of the Geographic Society in Lima, in which he said that Peruvian sailors named this warm northern current El Niño because it occurs around Christmas.

The phenomenon was of long-term interest as it affected the guano industry and other industries that used marine biotic products.

Charles Todd observed in 1893 that dry seasons in India and Australia coincided with the phenomenon. Norman Lockyer recorded the same thing in 1904. A connection with flooding was suggested by Pezet and Eguiguren in 1895. In 1924 Gilbert Walker (namesake for the Walker circulation) coined the term Southern Oscillation .

In most years the phenomenon is unlikely to have an impact as far as Europe. However, there are years when the European climate seems to correlate with an ENSO event. Some studies see a relationship between the particularly hard winter of 1941/42 during the German Russian campaign and El Niño. Long-scale cycles like the Pacific Decade Oscillation may have to be considered here rather than El Niño itself. 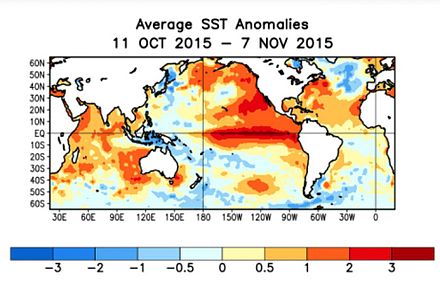 The great El Niño event of 1982/83 sparked a great deal of interest in the scientific community. The period from 1990 to 1994 was very noticeable, as El Niño appeared in unusually rapid succession during these years.

Over the turn of the year 1982/83 and in 1997/98 El Niño was unusually strong. The water temperature was seven Kelvin above the normal average temperature, so that thermal energy was released into the earth's atmosphere . During this event, the air was temporarily heated by up to 1.5 K, a lot compared to the usual heating of 0.25 K in the vicinity of an El Niño. In 1997/98 there was also an estimated death of one sixth of the world's reef systems. Since then, the effect of coral bleaching has become known worldwide; bleaching spots were found in all regions.

In 2010, Sang-Wook Yeh et al. Expressed the thesis that El Niño no longer appears in the shape of a tongue, but rather a horseshoe shape. This trend could potentially intensify in the coming decades due to climate change and / or naturally recurring cycles in the Pacific.

On March 5, 2015, NOAA predicted the arrival of a new El Niño event in the next few months. The prognosis was confirmed. The impact is believed to be the greatest in several decades in southern Africa and East Africa, and has resulted in livestock deaths, food shortages and political instability. In Ethiopia alone, 10 to 20 million people were threatened by hunger and acute water scarcity; the number of people affected was estimated at over 60 million worldwide. Overall, the El Niño turned out to be one of the three strongest ever observed (alongside 1982/83 and 1997/98) and, along with global warming, is considered to be the main cause of the global heat record that occurred in 2015.

According to some studies, El Niño events could be more precisely predictable than previously assumed (see also weather forecast ).

A forecast method is based on the evaluation of characteristic air pressure anomalies in the South Pacific region. The basis is air pressure measurements from Tahiti and Darwin (Australia) . The result of this evaluation is the Southern Oscillation Index (SOI).

A related phenomenon in the Atlantic is the decadal North Atlantic Oscillation , which could be causally related to El Niño / La Niña phases due to teleconnection via the North Pole ( Arctic Oscillation ) and the American land masses.

In contrast to El Niño, La Niña is an exceptionally cold ocean current in the equatorial Pacific, so to speak an anti-El-Niño, on which the name (Spanish: "girl") is based. This cold current creates a particularly strong low pressure area over Indonesia. The trade winds blow strongly and persistently. As a result, the eastern Pacific is cooling down further and there is a lot of rain in Indonesia. In contrast, it is very dry in Peru and there is hardly any precipitation. Due to global warming, however, exceptionally cold La Niña years are now warmer than the long-term average of the 20th century.