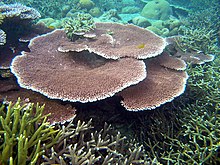 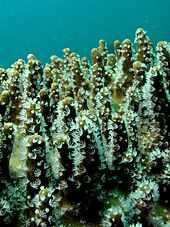 Leather coral of the genus Lobophytum with expanded polyps 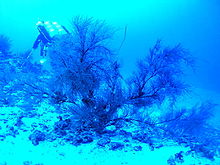 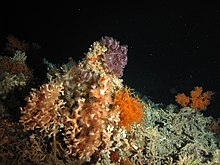 Cold water corals off Ireland at a depth of 750 meters 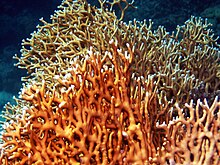 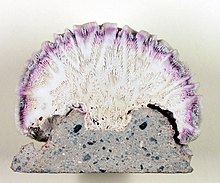 Cut through a hard coral; colored to determine the growth rate

As coral (from ancient Greek κοράλλιον Korallion "Coral") are sessile , colony-forming cnidarians (Cnidaria), respectively. The different groups of corals are not closely related to each other, but belong to different taxa of the cnidarians. The best known are the hard corals (Scleractinia), which have a major share in the development of coral reefs . Another important, species-rich group are the octocorals (Octocorallia), to which the soft , leather and tube corals as well as the gorgonians belong. The black corals (Antipatharia) are much poorer in species with around 235 species. While the groups mentioned so far are flower animals (Anthozoa), the fire ( Millepora ) and filigree corals (Stylasteridae) belong to the class of Hydrozoa .

In addition to the recent (now living) rugosa and tabulata are extinct coral groups. ( See also: Corals of the Swabian Alb .)

The coral is often only the skeleton of the white or red coral ( Corallium rubrum , synonym: Madrepora oculata , Gorgonia nobilis ).

Corals are found only in the sea , especially in the tropical belt . In terms of growth form, a distinction is made between soft corals and stony corals , the latter forming skeletons through the accumulation of lime , through which coral banks or a coral reef are created, as dead skeletal material is continuously overgrown by living tissue. Coral skeletons consist mostly of aragonite , which the coral animals secrete from their foot disk or their ectoderm to give support to the colony. The individual skeletons are usually branched like plants and at the ends of the branches, the growth tips , there are often colorful polyps , which also give the impression that corals are undersea flowering plants.

As with most sessile (= fixed) marine animals, corals are also filter feeders , i. That is, they also feed by filtering out microplankton , nutrients and trace elements from the current-rich seawater. However, many of the corals that live near the surface of the water do not feed by filtering plankton alone, but also (or even to a greater extent) by endosymbionts , i.e. H. Symbiotic algae , so-called zooxanthellae , embedded in the polyp cells , which also cause the intense colors in the living tissue of the coral. These unicellular algae are seamlessly integrated into the coral's nutrient balance with their photosynthesis metabolism. Depending on the plankton present, the size of the coral polyps can be very different, so a distinction is made between large polyps (LPS - Large Polyp Sclerantinia) and small polyps (Small Polyp Sclerantinia), with the polyp size varying from fractions of a millimeter to several centimeters. Corals have been around for over 400 million years; they help the geologist with palaeoclimate reconstructions (see also: Scale age determination (biology) ).

In addition to the hard corals of the tropics, you can also find cold water corals (or deep sea corals). They have no zooxanthellae and feed exclusively by filtering plankton. They have only been researched in more detail since the 1990s. Since then, they have been detected in all oceans (including the Mediterranean, but not in the Black Sea and not in the Baltic Sea) at depths of 40 m (New England Seamount Chain) up to 3383 m (North Atlantic) at temperatures of 4 to 12 ° C; However, they mainly occur at depths between 100 and 200 m below the wave influence area.

Until 2007, a four-digit number of deep water coral species was known, which mainly belong to the fire corals , octocorallia , hard corals , filigree corals and black corals . The dominant reef-building species Lophelia pertusa and the oculinidae scoring Madrepora oculata . Cold water coral reefs can be found below the wave range, i.e. below 100–300 m. Like their near-surface relatives, they then provide a habitat for a diverse fauna. Around 4,000 animal species have been identified in the cold-water coral reefs.

The algae (zooxanthellae) mentioned above are very sensitive to temperature. If the water warms up too much, they start to produce toxins and are then repelled by the corals. The white chalk coat remains, hence the term coral bleaching . By global warming are more frequent and longer lasting to the "overheating" of sea water. As a result, coral bleaching, which is otherwise easy, from which a colony can recover, is more difficult and ultimately leads to death.

The acidification of the seas , which absorbs part of the anthropogenic emissions of carbon dioxide , which inhibits the formation of new limestone shells, poses a further danger . If the carbonate compensation depth increases due to acidification , deep-water corals are also endangered.

The discharge of feces also seems to be a factor in coral bleaching, as it could be observed more frequently in corresponding places. Coliform bacteria are suspected to be the trigger in the faeces. Coral bleaching has destroyed many popular diving areas in recent years . Even if it is not yet certain at what temperature the reefs die due to the above-mentioned human activities, coral reefs in warm areas are already showing the first symptoms of an irreversible change in the ecosystem (status 2015). In 2016, the heaviest coral bleaching ever measured in the Great Barrier Reef severely damaged 55% of the reefs, compared to only 18% in the previous two heavy bleaches in 1998 and 2002. In 2016, 93% of all reefs there were affected by the bleaching.

In a laboratory study it could be shown that some coral species are affected by microplastics .

Deep-sea corals are threatened by deep-sea fishing ( trawling and bottom-net fishing ). A negative influence from drilling platforms for oil or natural gas production in the vicinity of cold water coral reefs cannot be ruled out. Submarine transcontinental telecommunications cables are also a threat.

For several decades, enthusiasts such as Wolf Hilbertz , Tom Goreau or the Global Coral Reef Alliance have been trying to counteract the destruction of coral reefs. They create national parks in the seas and try to create artificial coral reefs and preserve dying reefs. A wide variety of methods were used, such as the reef ball , biorock technology , the sinking of ships, aircraft and vehicles. An artificially created reef made of submerged car tires ( Osborne reef ) has developed into an ecological catastrophe in the USA.

The calcareous axial skeletons of some octocorals and black corals are used for jewelry making. This use can be proven back to prehistoric times. The red coral is the most sought-after gemstone . However, the living corals are more important as a breeding ground and nursery for many sea creatures. Here they find protection from their enemies and enough food. Around a quarter of all known marine fish exist in the coral habitat.

Corals and coral branches, mainly red in color, were already used for amulets in ancient times. They were seen as protection against disease, lightning strikes and malformation. They were in ancient Egypt of Isis and in Rome the Venus holy. Coral rosaries ("paternoster claws") were very popular in the post-Middle Ages. In Italian popular belief, corals protect children from harm. That is why there are many depictions of the baby Jesus with a coral necklace and a collar with a coral branch. In secular iconography , the coral necklace has become an attribute of childhood . In the story "Der Leviathan" by Joseph Roth , the coral plays a central symbolic role.

The medicinal use of the calcareous skeletons of corals is also documented in the Middle Ages. They were used, ground into powder, in potions for spleen and urinary stone problems.