The title of this article is ambiguous. Further meanings are listed under Bhopal (disambiguation) .

Bhopal ( Hindi भोपाल Bhopāl ), called 'City of Lakes', is the capital of the state of Madhya Pradesh in India with 1.8 million inhabitants (2011 census). It is located on the eastern bank of a 361 square kilometer man-made lake called Upper Lake on the Vindhya Plateau . It is an industrial city ( chemical industry, cotton and precious stone processing ), cultural center with university , music academy, theater , cinemas and museums , as well as a transport hub ( road , railroad , airport ).

Bhopal is on National Higway No. 12 , which connects Jaipur in the west with Jabalpur in the east. After Indore leading State Highway 17 . The Raja Bhoj Airport is 15 kilometers northwest of the city, after the airport of Indore is the second largest airport in the state.

Bhopal's name goes back to the 11th century, when Raja Bhoj (1010–53), Parmar King of Dhar , received instructions from his court teachers to atone for the murder of his mother by connecting the nine rivers of his kingdom. After one of these rivers had been tamed by a dam , the ruler founded his new capital, Bhojapal, on the two lakes thus created . At the end of the 17th century, Dost Muhammad Khan (1672–1740), an opportunistic soldier of fortune, ex-soldier and former general of the Mughal emperor Aurangzeb (1618–1707) conquered the area in order to establish his own state of Bhopal on the ruins of the Mughal empire . In 1723 the place Bhopal was declared the capital of the princely state and remained so until 1956.

The Islamic dynasty founded by Dost Muhammad Khan was to become one of the most important ruling families of Central India, whose members were among the few chosen by Britain's viceroys to be honored with a salute with 19 shots - in recognition of their support from General Thomas Goddard (1740-83 ) during its march on the Hindu state of Maratha in 1778. From 1820 to 1926, women ruled Bhopal exclusively. The Begum ( princesses ) led the scepter behind the purdah (veil, men separate living area, fog) and let noble buildings erected, including the three mosques of sandstone include that still dominate the skyline.

On December 3, 1984, one of the greatest catastrophes in the history of industrial chemistry occurred in Bhopal . At the plant of Union Carbide of India Limited , a subsidiary of Union Carbide Corporation , around 40 tons of methyl isocyanate (MIC) were released into the atmosphere and drifted in a poison gas cloud just above the ground through an adjacent slum and affected around half a million people. As a result, according to official information, 1,600 people died immediately and around 6,000 more from the immediate aftermath. To date, the number of victims adds up to at least 20,000 people. Around 100,000 people today suffer from chronic and incurable diseases, some of which can obviously be passed on; Even today, every fourth birth in Bhopal is stillborn . The responsible company Union Carbide paid a total of 690 million dollars to the Indian state in the following years . But only a small part of the money went to the victims.

In December 1992 there was bloody street fighting between Hindus and Muslims in Bhopal, triggered by the destruction of the Babri Mosque in Ayodhya , whereupon an eleven-day curfew was imposed. But despite these religiously based violent riots, many stories of Hindus and Muslims who protected their friends of other faith from attacks by the angry crowd testify to the long tradition of religious tolerance in this city. 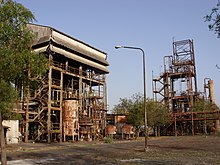 The abandoned site of the Union Carbide factory in Bhopal

The Friday Mosque towering in the old town is worth seeing . The mosque with its red sandstone walls and squat minarets was built in 1837 at the instigation of Qudsia Begum (1801–1881), the first female ruler of Bhopal.

In the east of the city is the Moti Masjid , a pearl mosque built in 1860 by Qudsias daughter Sikander Begum (1818-1858). Its slender minarets with golden tips and sandstone domes are remarkable.

The most impressive structure in the city is the Darul Uloom Tajul Masjid . This building, one of the largest mosques in India, with its colossal pink-colored minarets that protrude high above the cityscape, is not unjustly nicknamed the mother of all mosques .

The Adivasi Center, located on a hill on the east coast of the lake, is a must-see and shows the life of the Indian tribes in a natural environment without looking like a human zoo. A museum is attached.

The University of Bhopal was opened in 1970.