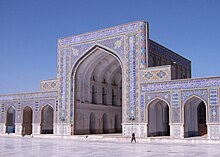 A Friday Mosque ( Arabic مسجد جامع masjid dschāmi' , DMG masǧid ǧāmi' , "comprehensive Mosque") is the main mosque of a country, a city or a neighborhood where Muslims the Friday prayers do collaborative, and preachers ( Khatib ) before the actual prayer ( salad ) a Friday sermon ( khutbah ) holds. For this purpose, this type of mosque usually has a pulpit ( minbar ). Since the sermon ( chuṭba ) is the deciding factor in the Friday service, the terms Masjid al-Chuṭba and Jāmiʿ al-Chuṭba are also found - albeit rarely - for the Friday mosque.

One of the earliest Arabic works in which the expression masjid jamiʿ is found is the "Book on the Conquest and the News of Egypt" by Ibn ʿAbd al-Ḥakam († 871). Here the mosque built by Amr ibn al-s in Fustāt is referred to as masjid jāmiʿ . It was the main mosque of Egypt in the first centuries of Islam. The Jama Masjid (English: Jama Masjid) in Delhi was of similar importance for the north Indian region .

In addition to the compound expression masjid jamiʿ , the expression jāmiʿ (جامع / ǧāmiʿ ) also used in isolation. So the scholars discussed al-Mawardi († 1058) in its constitutional treatise al-Ahkam as-Sultaniya the training sessions of ulamaa and Fuqahā' in mosques and uses the Arabic terms masjid and dschāmi' separately side by side for two different types of mosques. The plural form of dschāmiʿ is dschawāmiʿ (جوامع / ǧawāmiʿ ). Al-Māwardī's contemporary, the Hanbalit Abū Yaʿlā (d. 1066), explains that the imams of the great jawāmiʿ may only be appointed by the caliph , while in the simple masjid s of the various districts the population concerned may appoint the imams.

Friday mosques originally only existed in larger towns. Later, each city district could have its own Friday mosque , with a minimum of 40 people attending church services. In Turkey and Germany, a Friday sermon is held today in almost all mosques. This also explains why the Turkish term cami is used for these mosques , which corresponds to the Arabic word jamiʿ . Smaller mosques, for example rooms in caravanserais, gas stations, airports, which do not have a minbar, are called mescit in Turkey .

On the Indian subcontinent, the terms Jama , Jami or Juma Masjid are used for the Friday mosque, depending on the region and language . An example of the latter is the Cheraman Juma Masjid in Kodungallur .