Former theater used as a cinema: the Metro cinema in Vienna .

The theater  also - movie theater , cinema or movie theater called - is a performance operation for all kinds of films . Sometimes the term also stands for the art of film itself or for the experience of going to the cinema .

The term cinema is a short form of the term translated into German for the invention of the Lumière brothers : Cinématographe  - in German cinematograph. Both are from Greek roots ( κίνησις kinesis "movement" and γράφειν graphein "draw") formed artificial words so literally mean motion recording .

→ Main article : History of the cinema

The forerunners of the cinema were show booths and panoptics at fairs. In 1895 the first commercial film in the Bioskop format was shown worldwide in the Berlin Wintergarten . Up until the 1920s, cinema palaces were built in major cities that were modeled on theaters and opera houses. In 1926 the first full-length feature film with sound was shown. Within just a few years, the cinemas converted from silent films to talkies . Since the 1930s, the cinema had established itself as an entertainment and educational institution, especially in cities around the world. From the late 1950s onwards, the increasing spread of television resulted in a decline in the number of visitors and, as a result, the cinema died out . Many cinema owners responded by dividing their halls into box cinemas . With the multiplex cinemas newly built in the 1980s on the outskirts and in the provinces, consolidation at a low level can be seen. Some speak of a cinema renaissance today.

In the cinema, projectors are used to project films or images from a digital memory onto a screen . Until the introduction of the sound film in 1929, there was no standard for the recording and playback speeds of films. Depending on the light conditions and the type of recording (hand crank or automatic) and at the discretion of the cameraman or director (e.g. to emphasize hectic scenes), the recording speed varied and accordingly the speed of the movements also varied with the uniformly fast playback. The projectionists in the cinemas usually played at a speed between 15 and 18 frames per second. By the end of the 1920s, this speed rose to an average of over 24 frames per second, which was then established as the norm with the introduction of the sound film, where the speed must remain the same due to the soundtrack .

The sound is reproduced with different levels of complexity and is located on the film as a light ( Dolby , SDDS ) or magnetic sound track, or is played from separate data carriers, which are then synchronized with the film ( DTS ). Magnetic sound plays a subordinate role in commercial cinema today. COMMAG sound has almost disappeared, but the SEPMAG demonstration still exists at IMAX , for example . The system of the Canadian IMAX Corporation still uses 35 mm magnetic film , which runs synchronously with the 70 mm copy, as a backup for the uncompressed six-channel digital sound from the hard drive or DVD-ROM .

Until recently, a new sound system was tried out in the Ilmenau cinema . But this has now been discontinued. It was developed in cooperation with the local Fraunhofer Institute for Digital Media Technology and bears the name IOSONO . IOSONO is to create completely new spatial sounds and uses sound field synthesis for this . 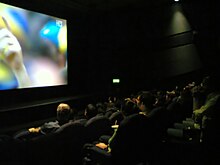 Football fans watch England match in HDTV in the cinema. You can see "HD1"

Digital cinema is currently spreading worldwide with thousands of screens per year, also due to the more widespread use of digital cinema cameras . Almost all new cinema equipment sold is now digital, and tens of thousands of cinemas worldwide are replacing their old mechanical projectors with modern digital projectors. The big cinema chains are leading the way. However, cinemaNet Europe was launched on November 12, 2004 with European funding . The target group are art house cinemas, which are supported in the acquisition of the technology and small productions (mainly documentaries, animated films, short films), which benefit particularly, since the distribution via satellite is much cheaper and easier to handle for independent film authors than the rental of conventional film copies.

In the US, the majority of cinemas are digital. Other countries, for example in Scandinavia, are completely retrofitting and will not offer film-based projection outside of museums and specialized cinemas.

As a result, live broadcasts are increasingly being offered in the cinema, such as concerts, operas and sports. On June 27, 2007, a Genesis concert in the LTU Arena in Düsseldorf was broadcast live in cinemas in Great Britain, Sweden and Spain, and on December 19, 2010, Simply Red's final concert from the O2 Arena in London was broadcast in Great Britain .

DCI has established itself as the global standard for cinema projectors and now has a market share of well over 90% worldwide in the sale of cinema projectors. Most films are delivered in the form of Digital Cinema Packages (DCP) for showing in the cinema .

Due to the better stereoscopic image quality of DCI projectors compared to film projectors, 3D films have had a worldwide breakthrough since 2008. The most commercially successful film in cinema history, Avatar , was largely viewed via 3D-DCI projection in 2009. The costs for modernizing the cinemas from film to digital projection, which in 2010 amounted to around 35,000 to 100,000 euros, are typically passed on by the cinema operators in the case of 3D film screenings in the form of higher entrance fees.

Cinemas that appeal to other senses in addition to image and sound, i.e. video and audio impressions, are referred to as effect cinemas . The term 4DX alludes to the expansion compared to 3D and contains "X" as a phonetic abbreviation for English. (special) effects. The technology comes from the South Korean company CJ 4DPLEX, part of the CJ Group , to which the cinema chain CJ CGV also belongs. In 2009 the technology was introduced in some South Korean cinemas.

Austria's first cinema with 4DX equipment opened in Vienna on August 2, 2017. Every single armchair can be tilted and shaken, and spray mist can recreate the atmosphere of a waterfall. As of August 2017 there are 370 4DX cinemas worldwide.

In 2017 there is also a 5D cinema in Vienna's Prater and one in the Lugner City shopping center (under repair in August 2017). In these, rather special, shorter films with compressed occurrences of special effects, such as airflow, are shown.

Large cinemas usually only play a very limited repertoire of current successful films. In contrast, the so-called arthouse cinema relies on a diverse spectrum, including older and less well-known films. There is also a municipal cinema in many German cities . 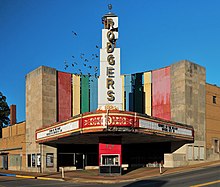 The architecture of cinema buildings is mostly similar to that of theaters with a stage , auditorium , foyer , box office and technical room.

The seating categories in the auditorium are parquet (see also restricted seat or shaving seat ) and box . Boxes on the side can be slightly raised compared to the parquet, which usually slopes towards the front, and can even be stacked on top of each other. Some movies, especially those next to it also served as an auditorium, had as ranks even higher than the floor lying balcony (back) and / or gallery (lateral). Seats in front of which there is not another, often narrowly arranged, but a cross aisle, are referred to as free feet , especially in Austria , from which you can freely stretch your legs forwards.

The first cinema buildings were so-called Nickelodeons , in which silent films were shown that were accompanied by a musician. A typical instrument at the beginning of the 20th century was the cinema organ , on which noises such as B. telephone bells, thunder rumble or hoof throbbing could be imitated. The buildings were differentiated and the so-called film palaces were built in the upper segment. The construction costs of the Mark Strand Theater, built in 1914 in Times Square by Thomas White Lamb, were already one million US dollars. Stage shows and films were shown. In the 1920s, some cinema buildings were supposed to create the illusion that one could see the starry sky. The Fox Theater in Atlanta, for example, was designed as a replica of an Arab open courtyard, including a starry sky and projectable clouds. In the 1930s, cinema buildings were built in the Art Deco style .

With the spread of television in the 1950s, these elaborately designed cinema buildings lost their importance and drive-in cinemas were created as an inexpensive alternative , in which the images were either projected onto a white wall or a canvas stretched onto a steel structure. Large cinemas of this kind had space for 2,000 to 3,000 cars, and there were also fast-service restaurants on the premises, or the food was brought to the car.

Multiplex cinemas followed from the mid-1960s. They were often located in a shopping mall and often consisted of between ten and twenty auditoriums where blockbuster films were shown. 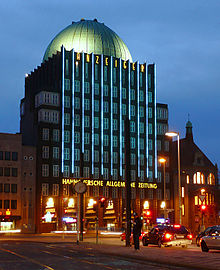 The highest cinema in Germany: The high-rise light games are located on the 10th floor under the dome of the Anzeiger high-rise in Hanover

In the 1990s, the number of visitors in most European countries stabilized or started to increase again slightly. In some cases the increase was particularly strong, for example in Italy, where there were 103.5 million admissions in 1999, but that number rose to 115 million by 2004. In Poland, too, the number rose from 26.6 to 33.4 million in the same period. In France, the number of visitors rose from 153.6 to even 194.8 million within these five years, in Great Britain from 139.1 to 171.3 million.

In 2004, around 1 billion cinema tickets were sold in the 25 member states of the EU, an increase of 55 million compared to the previous year. National productions account for 1.7% (Belgium) to 38.4% (France) of all visits in the member states.