Rotoscopy : A galloping horse based on the series photographs by Eadweard Muybridge

Play media file
The witch and her pet . Animation in the style of a flip book. 101 pictures in 14 seconds.

A cartoon is a special form of animation and consists of many drawings, mostly made by hand, which are presented one after the other. By changing the content slightly, from picture to picture, the viewer gets the impression that it is a moving picture .

The technically easiest way to create the effect of a cartoon is to flip through a flip book .

Production design from the cartoon Gertie the Dinosaur (1914)

The first drawn films were made by the Frenchman Émile Reynaud , with the help of the Praxinoscope he developed . Around 1877 he presented his first animated images using this process, which was considered the forerunner of cinematography . 1906 is considered to be the birth year of animated films, when the American J. Stuart Blackton presented his first fully animated film with Humorous Phases of Funny Faces . Two years later, the Frenchman Émile Cohl published his first cartoons, which he drew directly on film strips.

The films of the cartoonist Winsor McCay , who turned his comic series Little Nemo into a short film in 1911 and created the first popular cartoon character in 1914 with Gertie the Dinosaur, became particularly popular . As a result, many studios emerged in the early 1920s, the most famous of which were those of Max Fleischer ( Koko the Clown , Betty Boop , Popeye ), Pat Sullivan ( Felix the Cat ), Bud Fisher ( Mutt and Jeff ) and Walt Disney ( Mickey Mouse ) . In these studios, the division of labor system was developed by specialists, which still exists today and replaced the animator who had previously worked alone.

The first full-length animated film was the film " El Apóstol " made in Argentina by Quirino Cristiani from 1917; however, it was not a cartoon, but a flat-figure film . All copies of the film were destroyed in a fire in 1926. In Europe, the Swedish "Captain Grogg" was one of the early works of animation. Rudolf Leonard, Otto Dely and Lotte Reiniger worked in Germany and achieved great popularity with their silhouette animation films. Ladislaus Tuszyński and Peter Eng were the first animators in Austria . 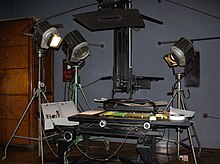 Installation for filming the cels

In the beginning, the drawings were drawn directly onto the film. A short time later this process was replaced by a slightly improved process in which the sheets of paper with the drawings were placed under the camera and recorded. From around 1920 the drawings were transferred to foils (" cels "), which made it possible to combine the animation with elaborate backgrounds. In 1928 the tone was added, from 1930 the color (in the revue film King of Jazz with the Paul Whiteman orchestra ). In 1933 the inventor and draftsman Ub Iwerks , who had worked for Disney until 1930, developed the Multiplan camera , with which flat background elements on different levels could be moved independently of one another, thus creating a more spatial impression. In the 1950s, Iwerks adapted the Xerox copier system, which copied the drawings directly onto foil. The smooth outlines "inlaid" by hand were replaced by a much rougher pencil line. Stephen Bosustov developed a new, graphically oriented style with fewer details at UPA that was better suited to the new medium of television. As a result, he and other studios developed "Limited Animation". In order not to have to constantly redraw complete figures, a figure was distributed over several levels so that only the actually moving parts had to be redrawn. This development, lamented by critics, was mainly due to the low budget of television.

The computer made its way into the cartoon world relatively late. First in the camera room, where from around 1970 tracking shots were calculated and executed by the computer. In the 1990s, scanning replaced the earlier copying of drawings; subsequent work steps such as coloring and camera now took place in the computer. Today's production systems in large studios automate as many work processes as possible, but an animated film is still primarily a manual work that is performed either with pencil and paper or on a graphics tablet . Around 20 to 400 people work on a full-length cartoon and tens of thousands of drawings are made.

More recent developments often also integrate objects created three-dimensionally on the computer, which are mainly used for vehicles or moving objects when panning cameras. But computer animations are also sometimes used for characters , which, for example, enable realistic hair to fall, but which are integrated into the classically created drawings.

The classic workflow in large studios begins with a script and the drafting of the characters. The script is the basis for the storyboard , in which there is at least one drawing for each take, from the camera position, the movement of the characters and the type of background can be recognized. After the storyboard, layouts are drawn, in the size in which both animators and background artists work. For each figure there is a model sheet including a figurine , which represent the binding templates for all draftsmen.

Usually, when the script is complete, the characters' dialogues are recorded. A track reader (nowadays often software) transfers them sound for sound into the X-Sheets (" exposure sheets , also dope sheet"). The X-Sheet is an individual frame script for each individual shot (which is called “scene” in the animation area), which is binding for the animator and the cameraman. For each single image it contains a line in which it is entered which sound can be heard and which drawings are to be placed under the camera. In addition, all camera movements are recorded.

The animator receives the storyboard, the necessary model sheets, a copy of the layout and the X-sheet. He designs with some sketchy drawings, the structure of the animation key frames (engl. Keyframes ) or main phases. These are the drawings that define the movement. To check his work, he records it with the linetester , software that plays back drawings recorded by a video camera on a computer. He can shift each drawing until the timing is right. If the animator and the director are satisfied with the scene, the " rough animation " goes to the animator's assistant. He draws the “ cleanups ”, i.e. final drawings of the key images, true to the specifications of the model sheet, and possibly adds “ breakdowns ”. These are drawings between the key frames that define the movement even more precisely. The growing pile of paper now reaches the inbetweener or intermediate phase draftsman , who inserts the still missing drawings between the existing ones.

For normal movements, 12 drawings per second of film are sufficient. With extremely fast movements or movements across the picture, up to 24 drawings are required so that the gaps between the positions are not so great and the illusion of movement is not destroyed. At studios like Disney, the average is around 18 drawings per second. TV series sometimes get by with 6 drawings per second. In the course of the years many techniques have been developed to save drawings and to create the illusion of movement by choosing the image details, cuts or tracking shots over still images instead of creating many drawings.

Furthermore, it is common to divide the drawings into different levels: in dialogue scenes, for example, only the mouth movement is animated, but the body only a little. Drawings are also often reused. In a dialogue scene, for example, the body is animated in a loop to simulate natural movement. This division into layers is usually done by the key animator. Therefore the X-Sheet has one row per exposure, but several columns for the different levels.

If all drawings are available and the scene has been tested and approved several times, it can be colored. In the past, all drawings were transferred to foil or copied and then colored in by hand on the back. Nowadays, coloring takes place more and more in the computer. The colorist works on the scanned drawings on the screen. Animation software can automate a lot here, for example only the first image of a scene is colored by hand, then the computer colors all further phases, and finally only possible errors are corrected by hand.

In the meantime, the backgrounds are being painted. In the past, the backgrounds with the painted foils met again under the camera, today they are also scanned in or even painted entirely on the computer. Putting together ( compositing ) the different parts of the animation on the backdrop provides the opportunity to include more special effects. Once all the individual parts have been inserted, the scene is rendered and either saved digitally or exposed on film.

For repetitive movements or processes, endless loops or animation cycles are created. Examples of this are flowing movements in bodies of water, running or flying animals or moving vehicles that are placed in front of a changing background. In the case of a striding forward movement, the figure is animated to take a step with one foot, then a step with the other foot, and this is then set in a loop cycle so that the movements are seamlessly linked .

The production of full-length cartoons for the cinema has declined since 2004. The success of Pixar and other producers of CGI animation films led the management of the Walt Disney Company to stop producing classic cartoons. The Cows are Going (2004) was supposed to be the last cartoon from Disney Studios for the time being. With Kiss the Frog , however, Disney returned to classic animation in 2009. Other studios are also affected by the reorientation of their financiers away from 2-D and towards 3-D film, although Pixar's economic success is based more on its content and artistic virtuosity. After Disney acquired Pixar for $ 7.4 billion, John Lasseter, Disney's new artistic director , decided to reverse this management decision.

Long cartoons, especially TV series, are still being produced around the world. Disney itself operates studios in Japan and Australia that use classic technology mainly for the growing home video market. The animated film industry is growing in Japan ( Studio Ghibli ), Korea ( SEK Trickfilmstudios in North Korea ), Taiwan and China, which either works as a supplier for European and American companies or primarily supplies the domestic market with its own productions. Outstanding artistic personalities like Hayao Miyazaki refuse to accept the 3-D boom: “We use the technology that looks best graphically. And hand drawings are still the most suitable method for this. "

In Europe, thanks to the EU's cartoon program, there has been an increase in the production of full-length cartoons in recent years, most of them for children. With the advances in computer-aided production, the boundaries between 2D and 3D are becoming increasingly blurred. The decisive factor for choosing a production design is no longer the cost, but mainly artistic and marketing reasons.