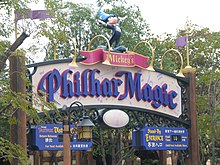 Dancers in a Mickey Mouse revue, 1931 in Berlin

The popularity of this film was not least due to the fact that it was the first well-known cartoon with sound. The voice of the mouse protecting her friend Minnie there was that of Walt Disney himself, and his wish to let everyone hear it too almost ruined him. The amplifier's tubes had given up on the sound recording and the small studio owned by Disney, his brother Roy and their partner Ub Iwerks was on the verge of bankruptcy. Walt sold his car to produce voice and orchestral accompaniment. From the first speaking role in The Karnival Kid (1929) to 1946, Disney spoke in the films Micky himself. From the section Mickey and the Beanstalk in the film Fun and Fancy Free , James G. MacDonald took over the speaking role until the mid-1970s. From Mickey's Christmas Carol (1983) until his death in May 2009, Wayne Allwine was responsible for Mickey's voice.

Disney was more or less “forced” to develop this character at all due to external circumstances. Until then he had made his living with the very successful Oswald the Lucky Rabbit . However, he had lost the rights to his former financiers after a legal battle. Then he is said to have come up with the comic mouse "Mortimer" in collaboration with Ub Iwerks, the story told to this day. His wife Lillian found the name too pompous and suggested "Mickey".

When Mickey first appeared, he looked little more than an Oswald with shorter ears and an elongated tail. But Mickey's appearance soon changed. At first he got rimmed eyes instead of point-shaped ones and was thus able to express himself larger. From the film The Opry House (1929) Mickey wears gloves. But one quirk was not changed: like almost all cartoon characters, Micky only has four fingers. This should reduce the animation effort. For this reason, Micky only wears simple trousers with two buttons for a very long time and only receives full clothing late (from 1945 Micky Mouse wore long trousers).

After Mickey's great success in the later 1920s and 1930s, original supporting characters, such as Donald Duck , invented in 1934, finally achieved greater popularity. From the 1940s onwards, only a few films were made with Mickey Mouse in the lead role.

In 1940 Mickey Mouse was to build on the earlier success with his appearance as a sorcerer's apprentice in the film Fantasia . In color and with stereo sound, the film showed animation techniques that were groundbreaking at the time. However, the film was a flop and initially failed to bring in its production costs. Only later re-performances from the 1960s onwards brought success.

Mickey Mouse is, along with Donald Duck, the Rugrats and the Simpsons, one of the few cartoon or comic characters who have made it to a star on the famous Walk of Fame in Hollywood (at 6925 Hollywood Blvd.).

Disney had already had its first experiences with building a character as a brand when marketing the lucky rabbit; at Micky, merchandising became a huge business. The first licensed product appeared in 1930: for a fee of 300 dollars, a company was allowed to print school folders with the mouse. Three years later the brand power had grown so much that it was able to save an entire company. The Ingersoll-Waterbury watch factory resisted the impending bankruptcy thanks to the license to produce Mickey Mouse watches. In just a few years, Disney was making millions on such deals. In addition to these, Micky took part in numerous video games, including the successful Kingdom Hearts series. With Micky Epic , an adventure game was released for Nintendo Wii in November 2010 that also takes a closer look at Micky's comic / cartoon beginnings. In November 2012, Disney Mickey Epic 2: The Power of 2 (Wii, Wii U, Xbox 360, PS3, PS Vita) and Disney Micky Epic: The Power of Fantasy (3DS), two more offshoots of the franchise, appeared.

Two years after his screen debut, on January 13, 1930, the first comic ( He's Going to Learn to Fly Like Lindy ) with Mickey Mouse appeared in American newspapers (also called Plane Crazy). Soon millions of people around the world were reading the stories. The newspaper comic strips were largely drawn by Floyd Gottfredson , who took characters from the films (e.g. Goofy ) and introduced new ones (such as The Black Phantom (flat nose) , Commissioner Hunter , Gamma ). Paul Murry was particularly important for the comic books .

Since there was high demand for Disney comics in Europe from 1950 onwards, which could not be satisfied with the material from America, many comics were drawn in Italy from the 1950s onwards. Here is particularly Romano Scarpa to name. These days, the United States no longer plays a role as a producer of Disney comics. The stories that appear in Germany come almost exclusively from Denmark and Italy. Some from the Netherlands and a few other countries (France, Brazil).

The place of production can be derived from the story code, which is usually inserted in the first picture of the stories. So z. B. a story with the code I TL 1723 from Italy, one with the code H 23148 ​​from the Netherlands. Stories with the letter D were produced for the Danish Egmont publishing house, which also draws artists from other countries - u. a. America - busy.

In Germany, the comics have been published regularly since 1951 in the “Micky Mouse” series . As early as the 1930s there had been a few prints of Mickey Comics in newspapers and in 1937 a short-lived Swiss Mickey Mouse newspaper . In 1942 Horst Rosenthal, interned in Camp de Gurs , drew the comic Mickey au camp de Gurs , in which he lets the character of Mickey Mouse experience camp life and caricatures it in an ironic and sarcastic way. Pnina Rosenberg stated in an article published in 2013 that this “comic booklet [..] is now an integral part of the well-known iconographic testimonies about the French internment camps and the“ undesirable foreigners ”held in them. Mickey Mouse, the well-known character from American cartoons , appears here in a parody of the misery that many refugees from the German Reich had to endure during the war. "

In the German versions of the series in which Mickey Mouse appears, he has been spoken by Mario von Jascheroff since the mid-1990s .

According to the original legal regulations of the USA, Mickey Mouse would no longer be a copyrighted work today. However, the extension of protection was made possible by a change in law called the Sonny Bono Copyright Term Extension Act .