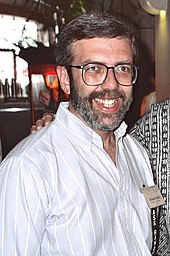 At the age of 15, Maltin began working on the magazine Film Fan Monthly . After training as a journalist at the University of New York, Maltin published film articles in various magazines, newspapers and journals, including the well-known magazines Variety and TV Guide, and soon made a name for himself as an excellent film critic.

Maltin is best known as an author through his compendium Leonard Maltin's Movie and Video Guide , which has been constantly updated with film summaries and reviews since 1969 and has also been published annually since 1988. He has also written books on film art ( Behind the Camera , The Whole Film Sourcebook , Leonard Maltin's Movie Encyclopedia and Of Mice and Magic: A History of American Animated Cartoons (German edition in the bibliography below)). One of his specialties is the filmmaking of Walt Disney and the group of companies he founded, the Walt Disney Company . Maltin also wrote the standard work The Disney Films , which saw several editions.

Since the 1980s, Maltin has appeared regularly as a film critic on the US show Entertainment Tonight and can also be heard on its own radio program ( Leonard Maltin on Video ). Together with the Boston film critic Joyce Kulhawik , he also hosts the television show Hot Ticket . In Germany, Maltin has also gained greater fame since the introduction of the DVD , as he appears as a presenter and commentator on a number of Disney DVDs. In his role as a critic and film historian, he is also a sought-after interview partner in TV documentaries.

In the mid-1990s, Maltin became President of the Los Angeles Film Critics Association and sits on the board of directors of the Hollywood Entertainment Museum. For almost a decade, Maltin has also been a teacher at the New School for Social Research in New York and currently teaches at the School of Cinema-Television at the University of Southern California .

Maltin is married and has a daughter, with whom he also produces a podcast.