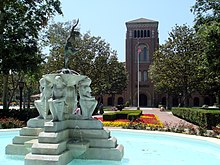 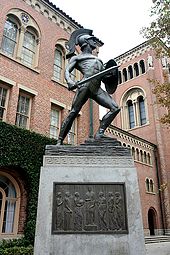 Tommy Trojan, the symbol of the university

USC is a member of the Association of American Universities , an association of leading research-intensive North American universities that has existed since 1900. The University of Southern California was named "University of the Year" by Time magazine and the Princeton Review in 2000 . In addition, USC was named one of the "Top 10 Dream Universities" among US high school graduates in 2011. It was voted 47th best university in the world by the Academic Ranking of World Universities .

The college is known for its important role in the development of computers and the Internet. The Domain Name System (DNS), antivirus , VoIP and the DNA computer were invented at USC. In total, the university is associated with nine Nobel Prize winners , one Turing Award recipient and 11 Rhodes scholarship holders . The university's graduates include 29 billionaires, the fourth highest average in the world after the University of Pennsylvania , Harvard and Yale . The University of Southern California is home to some of the world's best and most renowned journalism and engineering schools, the Annenberg School for Communication and Journalism (International: Rank 2) and the Viterbi School of Engineering (International: Rank 10). Other outstanding faculties are the USC School of Cinematic Arts and the Marshall School of Business. The film school became famous through a donation from George Lucas , the director of Star Wars , of 175 million US dollars in 2006. Six Nobel Prize winners have taught or teach at USC, including Murray Gell-Mann , George Olah and Angus Deaton .

The USC sports teams are the Trojans ("Trojans"). The Los Angeles Memorial Coliseum on campus hosted the 1932 and 1984 Summer Olympics. USC athletes have won 288 medals (135 gold medals, 88 silver medals, and 65 bronzes) in the Olympics, more than any other university in the world. The word is also used to describe university students. USC is known for having a strong school culture. To keep the alumni connected, the Trojan network consists of over 100 alumni groups on four continents ( North America , South America , Europe , and Asia ). A common saying among those associated with school is that you are a "Trojan for life".

USC's 22 libraries and other archives contain nearly 4 million printed volumes, 6 million microform articles, and 3 million photos. You subscribe to more than 30,000 current series titles , almost 13,000 m manuscripts and archives and subscribe to over 120 electronic databases and more than 14,000 journals in printed and electronic formats. Every year, reference transactions with a number of almost 50,000 and approximately 1,100 presentations with 16,000 participants are carried out. Established in 1994 by Steven Spielberg , the USC Shoah Foundation has recorded testimonies from survivors and other witnesses to the Holocaust .

The university was founded in 1880. Teaching began with 10 lecturers and 53 students. The first graduating class in 1884 consisted of three students, two men and one woman.

The range of courses at USC has been steadily expanded, in the early days a new faculty was added almost every year , thus creating the Music Department (1884), the Medicine Department (1885) and the Art Department (1887).

The university has grown steadily since those early years. Numerous departments were added - USC employs around 4,604 full-time teachers in 2019/2020 - and the number of students rose to around 48,500 students for this semester.

During the Second World War , Ludwig Marcuse taught German literature and philosophy here. The German-American architect Konrad Wachsmann , who designed the summer house in Caputh for Albert Einstein, taught from 1964 to 1972 in the Department of Architecture of the Graduate School of Architecture. Jascha Heifetz held the professorship for violin from 1959 to 1983.

The academic units ("Schools") of USC are:

In the fall of 2019, 2,848 students were aiming for a Bachelor's degree at the University of Southern California's Viterbi School of Engineering . 6199 Masters and PhD students worked in one of the 64 Masters courses or the 13 PhD programs. These were listed among the top ten internationally. More than a third of the professors have a background in industry. The university has 35 members of the National Academy of Engineering , 57 winners of the Presidential Young Investigator and CAREER Award and 13 winners of the PECASE Early Career Award, making the faculty one of the best in the world. The Princeton Review rated the USC video game design program 1st out of 150 schools in North America .

The Viterbi School of Engineering also has a number of famous graduates, including the first man on the moon, Neil Armstrong , who completed his Masters here. The institute is named after the electrical engineer and computer scientist Andrew J. Viterbi , who donated $ 52 million to the USC.

Because of its proximity to Hollywood , the School of Cinematic Arts' close association with the entertainment industry, and the architecture on campus, the university has been used as a filming location in numerous films, television series, commercials, and music videos . According to IMDB , the USC campus has been featured in at least 180 movie and television titles.

The Annenberg School for Communication and Journalism was founded in 1971 with the support of the US Ambassador Walter H. Annenberg . The curriculum provides that students study print and online media for the first year of study. The USC communication program often ranks first in the world according to the QS World University Rankings .

USC's business school is named after Gordon S. Marshall, who donated $ 35 million to the USC. In the Bloomberg Businessweek Business Schools Ranking, the Marshall School of Business was ranked 14th worldwide in 2018.

The faculty, founded in 1921, trains city and regional planners. In the area of urban planning it is the most important institution in the USA. Training is also provided for positions in health and disaster management and in public administration.

The University of Southern California Thornton School of Music was founded in 1884, just four years after the University of Southern California was founded. The school is located on the university campus in southern Los Angeles. It is named after the patron Flora L. Thornton (1913-2010), who donated 25 million US dollars to the school in 1999. In 2006 she donated a further 5 million to support the school.

The USC Thornton School offers courses and a. for opera, early music, jazz, composition, orchestral conducting, film music and music management. Due to its proximity to the film and music industry in Los Angeles, the university has developed into a study center for film music.

The music magazine Rolling Stone named the Thornton School of Music one of the top five music schools in the country. On a ranking list by the Hollywood Reporter , it was ranked 3rd on a list of 25 in 2015.

The college is a member of the Pacific-12 Conference and currently has one of the most successful football teams in the NCAA. According to tradition, a Trojan horse is always present in the games. The statue of the Trojan, also affectionately known as "Tommy Trojan", which is located on the USC campus, is covered up during football games as enemy fans try to damage the statue. There is strong rivalry between the UCLA Bruins and the USC Trojans . The Trojans traditionally play in the Los Angeles Memorial Coliseum , a sports facility directly opposite the University of Los Angeles, about 15 minutes from the city center. The sports facility is one of the largest in the world and has a capacity of 92,000 spectators. At record times, 115,000 spectators were counted in the stadium. The stadium hosted the 1932 and 1984 Olympic Games.