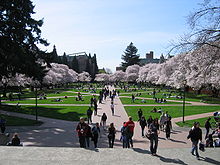 The Drumheller Fountain , built for the 1909 World's Fair, with Mount Rainer in the background 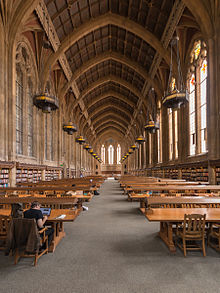 Reading room of the Suzzallo Library, built in 1926

The Paccar Hall, home of the Foster School of Business

It is on their position in the US state of Washington named and is the largest university in the Pacific Northwest and one of the oldest institutions of higher education on the US west coast .

The university consists of three parts: the largest 2.8 km² campus in Seattle , and two other higher learning institutions in Tacoma and Bothell . The university is a member of the Association of American Universities , an association of leading research-intensive North American universities that has existed since 1900.

It is also worth mentioning that the University of Washington is one of the richest universities in the world with a current endowment of 3.1 billion US dollars. In financial and structural terms, it benefits in particular from its historically grown proximity to technology companies such as Microsoft , Amazon , Nintendo and Boeing , which are based in the Seattle metropolitan area . To set the graduates of the University of Washington at major IT and high-tech companies in Seattle, the Silicon Valley and Silicon Forest which, according alma mater staggered largest employee group.

The university has produced many important figures throughout its history, including 20 Nobel Prize winners and numerous Pulitzer Prize and Fulbright Fellowship winners .

Forbes magazine selected the 2.8 km 2 campus with its over 500 buildings, 26 libraries, green spaces and vistas as one of the 15 most beautiful in the USA.

The city of Seattle in the US state of Washington was one of the first settlements to emerge in the newly established Washington Territory between the mid and late 19th century . In 1854, Territorial Governor Isaac Stevens recommended the establishment of a university in Washington. Some prominent Seattle residents, led by Methodist minister Daniel Bagley, saw this idea as an opportunity to increase Seattle's prestige . They were able to convince Arthur A. Denny , co-founder and member of the government of the Washington Territory, of this idea. It created a law , the two universities, one and one in Seattle in Lewis County envisaged. Shortly thereafter, however, this was changed to the effect that a university would only be established in Lewis County, provided that land would be donated locally.

However, when no property was found, Denny suggested in 1858 that the university be relocated to Seattle. In 1861 the search for a suitable piece of land (40,000 m²) began to serve as a campus for the university. Denny, along with fellow pioneers Edward Lander and Charlie Terry, donated a piece of land at Denny's Knoll , an area that is now downtown Seattle. The area was between today's 4th and 6th Avenues, which border the area to the west and east, and between Union and Seneca Streets to the north and south.

The university officially opened its doors on November 4, 1861. At the beginning the university struggled with some problems and had to close three times: in 1863 for lack of students, in 1867 and 1876 for lack of funds. By the time Washington joined the Union in 1889 , however, Seattle and the university had grown significantly. At the beginning about 30 students were enrolled, now there are over 300. The growing number of students required a new campus. It was therefore a committee set up under the direction of Edmond Meany - should find a place for a new campus - himself a graduate of the University. The committee selected a site in Union Bay, northeast of the city center.

In 1895 the university was moved to the new location. The newly constructed building was named Denny Hall . In 1899 the previous building of today's Burke Museum was set up on the campus . The attempt to sell the old campus failed. The area of ​​the old campus still belongs to the university and is called the Metropolitan Tract . It is in the heart of the city and one of Seattle's most valuable real estate areas, it brings in several million dollars in revenue each year .

The Huskies rowing team has produced numerous Olympians. Among other things, the Huskies came in eighth , which won the 1936 Olympic Games .