Caltech is a redirect to this article. For the asteroid of the same name, see (2906) Caltech . 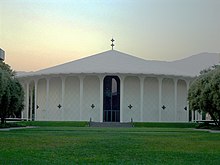 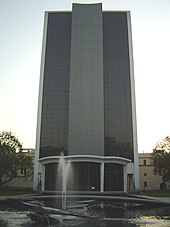 The California Institute of Technology ( German  Technical University of California ), better known as Caltech is a private top university in Pasadena in Los Angeles County , which in natural and engineering sciences specializes.

The research university was founded in 1891 with only 31 students. To date, the number of students at around 2,000 is very low compared to its large rival MIT with a similar research profile, with a large proportion of them in postgraduate studies . The university is a member of the Association of American Universities , an association of leading research-intensive North American universities that has existed since 1900.

The Jet Propulsion Laboratory of NASA , which monitors the operation of space probes, is part of the university. The institute is connected to the BIRN research network. Thomas F. Rosenbaum (* 1955) has been the university's president since July 1, 2014 .

With around 300 professors and 2171 students (2016/2017), the scientifically highly productive university is extremely small, but according to various rankings it is one of the ten best universities in the world. In The Times Higher Education Supplement (2011/2012) it was rated as the best university in the world in general and for engineering and physics . In the history of the university, 37 members and alumni have won a total of 38 Nobel Prizes, including 17 in physics, 10 in physiology or medicine, 8 in chemistry, and 2 in economics and a Nobel Peace Prize. In 1891 the Throop College (after the founder Amos G. Throop (1811-1894)) was founded and only received its current name and the rank of university in 1921. The formative scientists of the early phase in the 1920s included George Ellery Hale , Arthur Amos Noyes and Robert Andrews Millikan .

The sports teams are the beavers . The college is a member of the Southern California Intercollegiate Athletic Conference .

Nobel laureates among the alumni and professors of the California Institute of Technology:

The four main male characters in the sitcom The Big Bang Theory are all employed by Caltech.

The film The PHD Movie is also set at Caltech. It is an adaptation of the PhD Comics by Jorge Cham.

The Caltech campus and some buildings are used as a filming location in the television series Numbers . However, it is not referred to under the real name in the series, but represents the fictional California Institute of Science (CalSci).

The film San Andreas is also partly set at Caltech.