Pasadena , also known as the Rose City , is a city ​​in California at the foot of the San Gabriel Mountains .

The area of ​​today's Pasadena used to belong to the Mission San Gabriel Arcángel (1771). Indiana farmers established a colony here in 1873 . The name Pasadena first appeared in 1875, the usual derivation from the Chippewa Indians, in whose language Pasadena means “of the valley” - part of the expression “Weo-quan pa-sa-de-na” for “crown of the valley” ".

The place grew rapidly when it became a junction of the Santa Fe Railway . The first Rose Parade took place here in 1890 and has been held every year since then on January 1st (except on Sundays, then on January 2nd). In 1886 the place received local self-government and city rights. Around 1900 the city developed into a vacation spot and a growing area for citrus fruits . The Hotel Green hotel complex near the train station, which was built in several phases from 1887 to 1903 and is now a cultural monument on the National Register of Historic Places, has been preserved from this period. 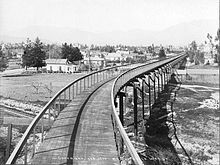 The Hotel Green made went to Los Angeles and the 1900 opened unique Radschnellweg California Cycleway . It was made of wood, raised, free of intersections, illuminated and subject to a toll, and was intended to provide a quick connection to downtown Los Angeles. Four cyclists could ride side by side, the construction was already prepared for doubling the width and the gradient should be only one percent on average. Due to the increasing motorization and the associated end of the bicycle boom in North America ( bicycle craze ) as well as the parallel tram of the Pacific Electric Railway , only a short distance of the planned almost 15 kilometers was realized. Edmondson Alley and Arroyo Seco Parkway now run on the areas for the (planned) cycle expressway .

After 1920, Pasadena became a suburb of Los Angeles and expanded. The Town Hall of Pasadena, the Pasadena City Hall , was founded in 1927 in the style of Beaux-Arts architecture opened. To avoid press photographers and journalists, many Hollywood stars got off at the Pasadena train station (instead of Los Angeles Union Station ).

In sections between 1938 and 1941, California's first freeway between Los Angeles and Pasadena was opened as the Arroyo Seco Parkway or Pasadena Freeway , which is now part of Interstate 110 . Its role as a regional center was underlined by the expansion and connection to other supra-local infrastructure, including the construction of Figueroa Street , the Harbor Freeway and, most recently, the Los Angeles Metro Gold Line in 2003.

At the Football World Cup in 1994 , the final between Italy and Brazil was played here in the Rose Bowl Stadium in front of 94,949 spectators, and it ended with a 3-2 penalty shoot-out for Brazil.

Pasadena is home to the California Institute of Technology (Caltech), which includes the Jet Propulsion Laboratory , which is operated in collaboration with NASA . The city is the center for the development and manufacture of electronics and precision instruments.

The Art Center College of Design (Art Center) is one of the leading graphic and industrial design schools worldwide. The Fuller Theological Seminary is also based in Pasadena. The Norton Simon Museum shows one of the most important art collections in California.

Historic Route 66 ran through Pasadena until it was abolished in 1964.

Pasadena has been the northern terminus of the Golden Line light rail on Metro Los Angeles since July 2003 . There are currently 6 stations on this line in Pasadena: Fillmore Station , Del Mar Station and Memorial Park Station in Old Pasadena, Lake Station in downtown, and Allen Station and Sierra Madre Villa Station . In June 2010, work began to extend this line to the neighboring communities to the east of the San Gabriel Valley , which was opened in 2016 to the city of Azusa .

The Atchison, Topeka and Santa Fe Railway ran through Pasadena with its own station. From 1971 on, Amtrak served the city with passenger trains . On January 15, 1994 this operation was set and it ran with the Southwest Chief of the last train through the city. The infrastructure operator Atchison, Topeka and Santa Fe Railway sold the route between Los Angeles and San Bernardino via Pasadena to the LACMTA . The Gold Line operates on this route today. The 1925 Pasadena station building on S. Raymond Ave. was preserved and the Gold Line station Del Mar opened next to it .

The Hollywood Burbank Airport - also known as Burbank-Glendale-Pasadena Airport - is located near Burbank and serves as a regional airport for Pasadena. This is owned and operated by the Burbank-Glendale-Pasadena Airport Authority. This is owned by the three cities. Most Hollywood Burbank Airport services are domestic. In addition, Los Angeles International Airport and Los Angeles International Airport-Ontario are two international airports less than an hour away from Pasadena. In addition, there are two smaller airports in the vicinity of Pasadena, Long Beach Airport and John Wayne Airport .