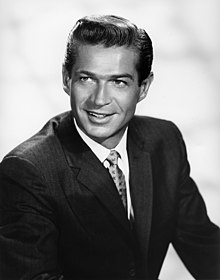 George Nader (born October 19, 1921 in Pasadena , California , † February 4, 2002 in Woodland Hills , California) was an American actor . In the 1960s he was very successful in German-speaking countries in the role of FBI agent Jerry Cotton .

Nader was already interested in the theater when he was still at school and played in several plays at the Pasadena Playhouse . This also gave him initially smaller roles in various films. Nader played his first leading role in the 3D film Robot Monster .

In the 1950s it was quite successful at times. For his role in the movie The Night of Vengeance , he received the Golden Globe Award for Best Young Actor in 1955 . Nader's career reached its climax with the film Clear Ship to the Battle ( Away All Boats, 1956). After that, his success in the cinema ebbed and he tried his hand at numerous television series. After a few episodes as a leading actor in the series The Further Adventures of Ellery Queen (1958/59) and in Dangerous Experiments ( The Man and the Challenge, 1959/60, 36 episodes), Nader got the lead in the 1961 crime series Shannon clears up ( Shannon ), in which he played an insurance detective. He often used a camera built into a searchlight or a microphone built into his wrist watch as gadgets . The series also ran on German television on Erste and also had 36 episodes.

In the mid-1960s he finally went to Europe , where from 1965 he made a successful comeback in the cinema as the title hero in German Jerry Cotton films. In 1968 he received the silver Bravo Otto from the readers of the German youth magazine Bravo and in 1969 the bronze Bravo Otto. After an eye injury in 1974, he retired from the film industry and devoted himself to writing. His book Chrome , published in 1978, caused a stir as it was the first science fiction novel to contain gay content.

Nader was close friends with the actor Rock Hudson , who died of AIDS in 1985 and is said to have left him a large fortune. Hollywood insiders attribute Nader's widespread failure in America to, among other things, his coming out as a homosexual at an early age . Until his death, he lived with his life partner Mark Miller, with whom he had been together since 1951, on the Hawaiian island of Maui or on an estate in Palm Springs .