This article covers the Hawaiian island of Maui, more meanings under Maui (disambiguation) 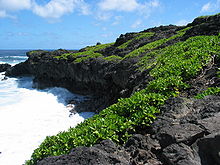 The Carthaginian II in the port of Lāhainā

The Pioneer-Inn , a more than 100 year old whaling pub in the port of Lāhainā

With an area of ​​1883 km², Maui is the second largest island in the Hawaii archipelago in the Pacific Ocean . Because of the flat land bridge ( isthmus ) formed by erosion between Mauna Kahalawai ("West Maui Mountains") and Haleakalā , Maui is also known as "The Valley Isle", as the land bridge from the two mountain regions like looks like a valley.

Maui belongs to the US state of Hawaii and is the largest island in Maui County . The latter also includes the islands of Lānaʻi , Kahoʻolawe and Molokaʻi . In 2010 Maui counted 144,444 residents and is located behind Oahu and Hawaii (island) . The biggest cities on Maui are Kahului , Wailuku , Lāhainā and Kīhei . Maui bears the name of the Polynesian demigod Māui - who brought fire to the people. The Alenuihaha Channel separates Maui from the island of Hawaii.

At sea level, Maui has a stable, tropical climate throughout the year. The average temperatures are between 23 and 31 ° C in summer and around 18 to 27 ° C in winter. On the summit of Haleakalā (3,055 m) there is snowfall in some winters, in 2019 for the first time also in lower elevations. The water temperature of the Pacific is between 22 and 27 ° C. The rainiest time is from November to March. Annual rainfall varies considerably due to the island's topography. The summit region of West Maui Volcano, with around 10,000 mm of precipitation per year, is one of the rainiest places on earth, while in Kīhei, which is in the rain shadow of Haleakalā, only 250 mm of precipitation is recorded annually. Maui's hurricane season runs from late summer through fall. The last hurricane "Iniki" (1992) only grazed Maui. The far more frequent tropical winter storms mostly come from the southeast. Such storms are known as the Pineapple Express . Maui is considered tsunami prone and has an early warning system.

The dominant industries on the island are agriculture and tourism . A large part of the fertile plain between West Maui Volcano and Haleakalā is used by sugar cane and pineapple plantations . The Hawaiian Commercial and Sugar alone operates sugar cane plantations with a total area of ​​150 km² on Maui. A peculiarity of sugar cane cultivation on Maui is the targeted burning of the fields shortly before the harvest. The tradition goes back to a laid-off plantation worker who burned down his employer's fields out of sheer frustration. When this still caught up with the harvest, it became apparent that the raw sugar yield was higher than usual. Since then heard the locals' Maui Snow "( Maui Snow ) called Ash a common sight in the southern sugarcane fields towns such. B. Kihei . The only large coffee farm "Ka'anapali" is divided into several plots and coffee groves.

The Tedeschi Winery has existed in Ulupalakua on Maui since 1974.

The largest airport on the island is Maui Airport in Kahului ( IATA code: OGG; ICAO code: PHOG). From here there are connections to the other islands of the Hawaiian Archipelago and to the American mainland, such as Chicago , San Francisco , Los Angeles , Atlanta and Vancouver .

Maui is also home to the Air Force Maui Optical and Supercomputing Site ( AMOS ). The associated Maui High Performance Computing Center (MHPCC) in Kīhei operates some of the world's fastest computers. The AEOS telescope (Advanced Electro-Optical System) is the largest military telescope in the United States on Haleakalā . It has an opening diameter of 3.67 meters and is one of the first instruments of its kind to be equipped with adaptive optics . This technology enables the compensation of the atmospheric flicker. On the Haleakalā there are also several telescopes (0.4 to 1.6 meter opening diameter) which, as part of the US Space Surveillance System , help maintain a catalog of around 13,000 artificial space objects. Since the 3,055 meter high summit of Haleakalā is one of the five most important astronomical sites in the world, numerous other observation instruments are also located here, for example a solar observatory at the University of Hawaii.

The main tourist centers on the island are the coasts between Lāhainā and Kapalua and between Kīhei and Wailea. The attractions of the island include the Road to Hāna in the northeast, the Kahekili Highway in the north, the 110 km² Haleakalā National Park , the ʻĪao Valley , and the surfing and windsurfing areas in the north of Maui ( Hoʻokipa , Jaws, Lanes, Spreckelsville, Kanahā). Windsurfing is prohibited on the entire North Shore before 11am. This ensures that there is no risk of windsurfing for divers, anglers and swimmers in the morning. 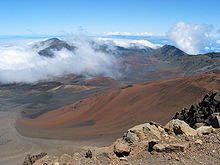 The Highway 378 meanders up to about 3040 m height on the Haleakalā in the national park of the same name . The 50 mile (80 km) route (via Haleakalā Highway 37 ) from Kahului takes at least 1.5 hours. The variety of colors in the panorama is caused by the lava shimmering red, green, blue or yellow depending on the composition. The crater, which is over 1000 m deep, is easily accessible on hiking trails. Here you can find, among other things, the rare Nēnē and the very rare silver sword in a subspecies that only occurs at the summit of the Haleakalā crater. During the day, the mountain is often shrouded in clouds. 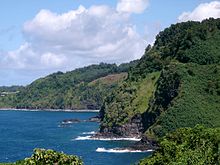 On the way to Hāna

The road around East Maui, Road to Hāna (road to Hana), leads on the eastern 50 miles over 54 bridges into a rainforest region with numerous viewpoints and waterfalls. If you follow the partly single-lane road to Kīpahulu , you not only get to the part of the same name in Haleakalā National Park, but after another mile you also get to the final resting place of aviation pioneer Charles Lindbergh near the Palapala Hoʻomau Church . The partly driving demanding road to Hana is one of Maui's biggest tourist attractions.

Kīhei and the south coast 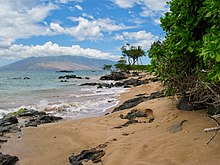 The sunny part of the coast at Māʻalaea Bay has recently developed into a holiday center. Humpback whales can be seen in all waters around Maui from November to March , hibernating here to mate and calve. Māʻalaea Bay (only 15 m deep) is particularly popular with whales (best viewpoint: McGregor Point ). There are apartment complexes and hotels on both sides of the main street of South Kīhei Road . Wailea joins even further south, with luxurious hotels and golf courses. The region around Kihei is one of the poorest in rain in Maui.

The historical Lāhainā is visited by two million tourists annually, which is approx. 80 percent of Maui's total tourist population. The name Lāhainā means “merciless sun” in the Hawaiian language . The beautiful location in the lee (in the west) of the West Maui Montains prompted King Kamehameha I to move his court to Lāhainā from 1820 to 1845 and to declare the place the capital of the Kingdom of Hawai'i.

Lahaina later became the most important whaling port in the Pacific. The eye-catcher is the banyan tree planted in the center of the village in 1873 (a ficus tree, the crown of which covers almost one hectare). Some museums, for example the Baldwin Home and the Wo Hing Temple , the prison , bear witness to the past of the former island capital. By the end of 2005, the Carthaginian II (a restored two-master) had been converted into a museum; it was sunk in the sea on December 15, 2005 about half a mile off Lāhainā and has been an artificial reef ever since.

In the old sugar cane town ( Pāʻia Sugar Mill , closed in 2000) Pāʻia on the north coast of the island, there are good windsurfing and surfing conditions. The coral reef Spartan Reef with water depths of 1 meter to 30 cm causes the famous North Swell, the swell of the North Pacific, to form huge waves (= surf ) after a few thousand kilometers of travel on this reef . The waves, particularly agitated by the winter storms between Japan and the Aleutian Islands, break several times a year, each for a few days on the north shore with a height of up to 20 m ( jaws ). Through the isthmus between the 2000 m high West Maui Mountains and the 3000 m high Haleakalā , the north-east trade wind is accelerated to 5-9 Beaufort during the day . In addition, there is the Venturi effect of Haleakalā , which acts like a huge vacuum cleaner on clear, sunny days due to the rising warm air in the west. At the end of March ( PWA World Cup ) and beginning of November ( Aloha Classic ), the world's elite windsurfers meet in Ho'okipa for the two most important wave regattas. 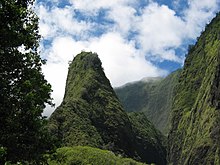 Starting directly in the administrative capital of the county, Wailuku , the 'Īao Road leads west as a dead end about 5 miles into the Īao Valley . The valley is framed by the evergreen slopes of the West Maui Montains . Here is the Kepaniwai County Park , a garden with pavilions and streams.

At the end of the road, the landmark of the valley, the 370 m high ʻ 370ao Needle, a monolith overgrown by lush jungle, rises above the valley. Beautiful walks lead along the ao River to some viewpoints.

This nursery, about 4 km south of Wailuku , gives an overview of the crops of the Hawaiian Islands.

This rather small and somewhat idiosyncratic museum in an old missionary house shows historical objects. Among other things, Duke Kahanamoku's surfboard made of redwood is on display here.

There are three airports on Maui. The largest airport on the island is Kahului Airport ( IATA code: OGG; ICAO code: PHOG). From here there are direct flights to the other islands of Hawaii as well as to the North American continent. There are also ferry connections to Lāna'i . On Maui there is also a public bus system ("Maui Bus"), which consists of twelve lines and mainly serves the places on the west side of Maui.