This article covers the island of Kaua'i. For the county of the same name, see Kauai County .

Kauaʻi ( pronunciation : [ kɐˈwɐʔi ]), German also Kauai , is one of the eight main islands of Hawaii and with an age of about six million years the oldest island of the archipelago . Because of its lush vegetation, it is also known as the garden island. On an area of ​​almost 1435 km², it offers a variety of landscapes and is home to around 72,000 inhabitants. The island's capital is Lihuʻe with 6100 inhabitants. The highest point on the island is the Kawaikini at 1598 m.

The area around the 1569 m high Waiʻaleʻale is one of the rainiest points on earth with an average of 11,684 mm annual precipitation. More precipitation falls on average only in Mawsynram , Meghalaya in India (11,873 mm). In view of the different times for which this annual average was determined, there is a controversy about the wettest point on earth, which, depending on the choice of parameters , makes the Waiʻaleʻale, Mawsynram or Cherrapunji (11,430 mm) emerge victorious.

The tourist centers of Kaua'i are Kapa'a , Princeville and Poipu .

The jagged and lush cliffs in the north of Kauaʻi (Nā Pali coast) are in stark contrast to the drier west side, which is characterized by the Waimea Canyon (which is also known as the Grand Canyon of the Pacific ). Most of the coast is lined with sandy beaches with coral reefs. The lighthouse Kīlauea Point Lighthouse from 1913 is located on steep cliffs, which today partly form a bird sanctuary where albatrosses , gannets and frigate birds breed. In front of the lighthouse is the small island of Mokuʻaeʻae .

Poʻipū on the sunny, rain-free south side is the most important holiday region with hotel complexes and holiday apartments. There is also Spouting Horn , a lava tube that ends in the sea , which offers a geyser-like natural spectacle when the waves are sufficient.

Taro is mainly grown in the flat Hanalei Valley . On Kaua'i is the Wailua River , the only navigable river in Hawaii. Near Waimea, in the far west of the island, at the end of Highway 50 (Route 50) is the natural beach Polihale, a desert-like dry dune landscape. Hanakapiʻai Beach in the northwest is also one of the most beautiful on the island.

View from the Pacific to the Nā Pali coast with its mountains rising up to 1200 meters from the ocean.

View into the Hanalei Valley in northern Kaua'i. 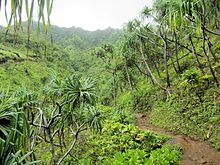 Like all inhabited islands of Hawaii, Kaua'i is located south of the Tropic of Capricorn and is therefore one of the tropics . Due to the relatively cool north-easterly trade winds , the daily maximum temperatures of 26 to 29 ° C are comparatively low for tropical conditions. The temperatures fluctuate only slightly over the year. In particular on the north-eastern slopes of the mountains there is a tropical rainforest due to the steady uphill rain . In contrast, the southwest of Kaua'i is comparatively dry, in places steppe and even desert climates occur. The winter months are rainiest, while the months April to September are drier.

The first people on Kaua'i (and the other Hawaiian Islands) were settlers from the Marquesas Islands. Why they left their homeland between the fourth or fifth century (the exact date is unknown) is questionable. Possible reasons are overpopulation or, quite simply, a desire to explore.

It is believed that a second generation of Tahiti settlers followed in the 11th century .

In January 1778, James Cook accidentally landed on Kaua'i. Cook was actually on a scouting trip as part of his third South Seas voyage to Alaska when his ship ran aground on the southwest coast of Kaua'i . The natives of the island believed Cook and his crew were gods and gave them everything they needed. Before Cook left Kaua'i again and continued his journey in the Pacific, he also visited the small neighboring island of Ni'ihau . In November of that year, Cook returned to the Hawaiian Islands, but this time went ashore on the island of Hawaii. There it came to an argument with the natives, in the course of which Cook was killed.

When King Kamehameha I the Great (1758–1819) wanted to conquer Kaua'i with around 10,000 warriors in 1796, his fleet sank in the rough seas. It was not until 1810 that the king of Kaua'i submitted to the rule of Kamehameha I. Later missionaries came who also built sugar cane plantations . Today the island has 62,000 inhabitants who live from the cultivation of sugar cane and tropical fruits and increasingly from tourism.

Kauai is historically divided into six moku , and these further into ahupua'a . The moku are called (with square meters in sq mi , in counter-clockwise order, starting in the west):

North of Kekaha in the northwest of the island, the US military maintains one of the largest missile test sites. Tests for the missile defense program, including the MIM-144 THAAD , are carried out at the "Pacific Missile Range Facility (PMRF)", also known as the Kauai Test Facility . There is also an air force base with the Barking Sands Pacific Missile Range Facility Airport and, further northeast, a small base of the Hawaii Air National Guard .

The airport of Kaua'i is located in the capital Lihu'e on the east coast. From there there are scheduled flights to the neighboring islands of Oahu and Maui as well as to the mainland of the United States and Canada. The airport is also connected to the small public bus network "Kauaʻi Bus" with nine lines. However, there are no ferry connections to the neighboring islands.