This article deals with geographic areas of the earth. For other meanings see Trope . 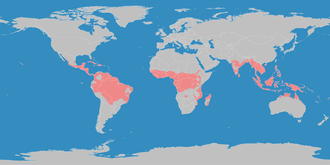 Tropical climate zone of the earth, according to Köppen 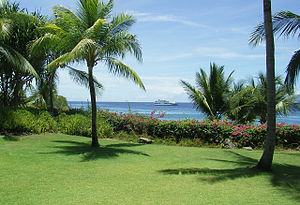 Midday in the tropics, the sun is almost at its zenith .

The tropics (from ancient Greek τρόποι Ἥλιου trópoi Hēliou , German 'solstice areas' ) are according to a common definition the area between the tropics , i.e. between 23.5 ° north and south latitude. There are also other definitions that are based, for example, on air pressure or annual mean temperatures.

In the inner tropics near the equator , there is usually an always humid tropical climate. The average annual precipitation is 2000 mm, whereby the highest amounts of rain coincide with the times of the highest sun positions ( zenith rain ). There are no distinct dry seasons. In the outer tropics , on the other hand, there is a wintry dry season with less rainfall overall, which is most pronounced in the peripheral tropics on the border with the subtropical climatic zone .

According to an earlier, still common, division of the earth into physical climatic zones , the tropics are the hottest climatic zone on earth with average temperatures of 25 to 27 ° C. Depending on how humid the respective tropical area is, it can be divided into five vegetation zones, the from tropical rainforest to desert .

As the polar boundary between the tropics and the subtropics, Köppen used the 18 ° C isotherm , Supan and Philippson the 20 ° C isotherm of the coldest month. However, these delimitations only relate to the warm tropics located at a low altitude above sea ​​level , but the typical climatic properties of the tropics also apply to the higher areas. Because the temperature decreases with altitude , if the temperature falls below the 18 or 20 ° C isotherm, but a higher value would be calculated, it is called cold tropics .

When outside or Ektropen those areas are called, are not in the tropics.

Vegetation zones of the tropics 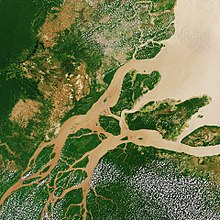 Amazon Delta with cumulus humilis clouds over the more humid areas of the Amazon rainforest , which are also formed there during the dry season due to evaporation (August 2017).

There are different vegetation zones within the tropics . These depend on the time the plants have sufficient water to grow. A distinction is made according to the number of arid and humid months:

Within the tropics, a distinction is made between the always humid tropics close to the equator and the alternately humid or dry tropics towards the tropics , which appear in different eco-zones from the tropical forests to the various types of savanna to the tropical semi-deserts and deserts.

In the always humid tropics, which, with the exception of East Africa and the Andes, are located everywhere on the equator, tropical rainforests are formed. Typical of the humid tropics, in which dry and rainy seasons form the seasons, are savannas , dry forests and monsoon forests that line the tropical rainforests, but the wetland of the Pantanal in South America is also located in this zone. The dry tropics are desert and semi-desert areas that have a constant temperature throughout the year.

The land use in the tropics is very different depending on the prevailing vegetation zone. Since the largest population growth on earth is observed in the tropical regions, it plays an important role.

The tropics as topos 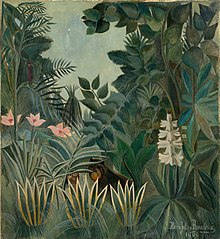 The tropics are more than a climatic category, they are also a cultural destination. Modern artists have been interpreting the tropics for more than 100 years. The coconut palm is a symbol.

The weather at the equator is mainly characterized by the intertropical convergence zone. Regular phenomena are the summer and winter monsoons . The trade winds are also characteristic . As extreme weather events, intense showers and thunderstorms as well as tropical cyclones can occur.