As Savannah (via Spanish sabana from a Caribbean Language a is borrowed) is generally tropical or subtropical vegetation type referred to, which consists of a closed herb layer and a more open wood layer. The demarcation to steppes , grasslands and dry forests is handled differently.

In addition, savanna is a collective term for the vegetation zone between the tropical rainforest and the desert. Savanna or savana / sabana means "wide plain". Depending on how you look at it, the savannah makes up 13 to 18 percent of the earth's total land surface. These numbers are so far apart because boundaries in nature are usually fluid and can extend over many hundreds of kilometers. Artificial boundaries are therefore required to calculate the proportion. These boundaries depend on the viewer's point of view and therefore differ from one author to another. 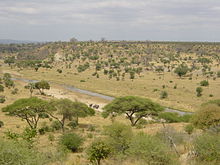 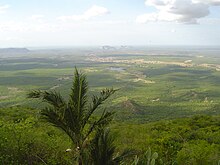 Climate diagram of a thorn savannah

Although the terms "savannah" and "steppe" were introduced to denote certain types of vegetation, the term was used more by geographers for certain climatic zones from the 1970s onwards . Carl Troll initially proposed that all hygrophilic plant communities in the tropics should be referred to as savannas, regardless of the type of vegetation. However, since hygrophil and xerophil are relative and difficult to define terms, Eckehart Johannes Jäger gave the term savannah a climatic meaning that had nothing to do with zonal vegetation.

The savannah is a landscape zone of the tropics, which is characterized by its open vegetation ( grassland ) and isolated trees or groups of trees. They occur in the transition area between the arid trade wind zone and the tropical rainforest climate. Accordingly, the savannah vegetation zone lies between the desert and tropical forest vegetation zones . Due to the summer rainy season, savannahs are deciduous, dry, bare plant communities.

As scientists from Lund University have established, the savannahs and steppes of the earth, along with the tropical rainforests, are of great importance as carbon sinks and thus for the global climate. The carbon dioxide removed from the atmosphere by the annual photosynthetic activity of the grasslands corresponds to about a third of the annual anthropogenic carbon dioxide emissions. Of course, the savannah only becomes a carbon sink if there is actually a net accumulation of carbon in the biomass or in the soil of the savannah. In many places this is counteracted by the frequent, mostly man-made fires .

The factor dominating the vegetation here is the seasonal lack of water. Typical values ​​are between 500 and 1500 mm annual precipitation (i.e. 500 to 1500 liters of water per square meter and year). The vegetation shows a pronounced period of activity in summer. Productivity increases with the length of the rainy season from 7 tons per hectare and year in regions near the desert to up to 20 tons per hectare and year in the semi-evergreen forests near the equator.

The genus Acacia with around 900 species worldwide represents important tree species of the savannah . The dry bald baobab has a soft woody, very thick trunk with a circumference of sometimes more than 20 m to protect against water loss. Such individuals are able to store up to 100,000 liters of water. In some areas you can also find tree-shaped leaf succulents, for example Aloe dichotoma . The important woody family of the Caesalpiniaceae can be found in more humid, more closed forests such as the Miombo forests of Central Africa . This includes, for example, the mopane tree ( Colophospermum mopane ).

Fires are important in the savannah ecosystem. They lead to the death of young trees and favor grasses. The fires remove dead plant parts and parts of the nutrients are returned to the cycle via the ashes (remineralization). However, other nutrients (especially nitrogen and sulfur ) are removed from the ecosystem with the smoke. In addition, the fire converts carbon from the biomass into carbon dioxide and leads to a reduction in the amount of litter entering the soil. Furthermore, after the fire, the solar radiation on the soil is increased, which results in a temperature increase in the topsoil and thus an increased mineralization rate . Both effects together (less carbon input , more carbon output ) cause a reduction in the humus reserves in the soil and an increase in the carbon dioxide concentration in the atmosphere.

In the savannah, as in all other climatic zones, there are animal species that have adapted to the vegetation of this habitat and, on the other hand, animal species that capture the adapted species as prey or consume them as carrion. The large herbivores ( herbivores ) of the savannah include gnu , gazelle , zebra , elephant , kangaroo and giraffe . The by far most common herbivorous animal species, especially ants and termites , come from the class of insects . The most important carnivores ( carnivores ) are cheetah , lion and also puma .

The competitive structure between grasses and trees is also influenced by these large herbivores: elephants break off branches on trees to get to the leaves, peel the bark and knock down or kick over trees for other reasons. As the tree layer dies, the forest is thickened, which improves the growth conditions for grasses that are grazed by buffalo, zebras and gazelles. With particularly intensive grazing, the conditions for the emergence of young trees improve. In particular, the acacias, which are reinforced with thorns and are therefore resistant to biting, can then spread. With this dynamic, the savannah landscapes serve as a model for the mega-herbivore hypothesis .

The ecological balance is heavily burdened by human activity. Particular mention should be made of overgrazing and the destruction of the sward by footsteps, which encourage erosion . In addition, there is the production of firewood and the cutting for animal feed. This activity is intensified by the population growth. A removal of the humus topsoil is forced, deforestation sets in and the desert spreads ( desertification ).

There are three different types of savannah: wet , dry and briar savannah .

The wet savannahs are located closest to the equator , while the very dry thorn-bush savannas are mostly located near the tropics and thus near deserts.

Features of the adaptation to the drought are for example the fall of leaves in the dry season, reduced tree growth and increased growth of water-storing plants.

Savannas are particularly widespread in Africa , the Serengeti is particularly well known . But they are also found in India , Australia and in the northern part of South America . In Africa, a savannah belt stretches in a semicircle through the continent, starting in the Sudan and Sahel zones of West Africa over the East African savannas to the South African Veld .

As a tropical and subtropical vegetation type, savannas are to be distinguished from the arid grasslands ( steppes ) of the temperate latitudes, for example the steppe landscapes of Eastern Europe and Central Asia, the prairies in North America and the pampas in South America.