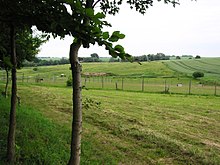 Grassland of the warm temperate climate of the temperate zone 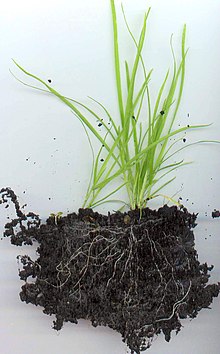 Grasses are often the first plants to grow over old buildings

As grass are monocotyledonous , herbaceous plants with inconspicuous flowers and long, narrow leaves called. Grasses have a round, hollow stalk or stem . On the one hand, a grass is a single such plant or a non-specific category for the biological classification of such plants. On the other hand, grass is the flat plant cover on the ground (as meadow or lawn ) or the entirety of grass-like plants that are eaten by animals or harvested by the farmer while mowing (see also grassland ).

Grass is the basis of life for many animals, especially ruminants and solipeds . A closed plant cover on the ground greatly reduces surface erosion ( denudation ), the soil is less eroded, and humus is formed.

Botanically, grasses belong to the order of the sweet grasses ; the two most important groups are sweet grasses and sour grasses . Grasses appeared for the first time in the Cretaceous Period , after which the erosion behavior of the affected mainland changed significantly.

The German word grass probably goes back to an old Indo-European syllable * ghr , the meaning of which "grow" can still be found today in the English grow . Compare also Latin gramen and ancient Greek grástis (fodder herb ) as well as the designation of the color green , which is probably also due to it.

Botanically, all plants called grass in German (with the exception of the seagrass plants ) belong to the order of the sweet grasses (Poales), namely to the following groups:

Sweet grasses are among the oldest useful plants. All grains (e.g. wheat , oats , millet , corn, and rice ) are sweet grasses. As a staple food as well as indirectly as fodder , the grains of cereals are the basis of human nutrition today.

Grass grown on permanent grassland or grass grown in fields ( arable grass ) is mainly used as animal feed in raw, ensiled ( grass silage , haylage ) or dried ( hay ) form . Hay can also be used as animal bedding . Grass silage is also used as a substrate in the production of biogas . The seasonal harvest of green waste can be estimated using satellites .

Traditionally, grass is used as a roof covering material, which can also be done in the form of a green roof . It can also be used as paper .

“Grass” as a metaphor

Some idioms use the "grass" as a metaphor :

Grass has also gained importance in the fine arts. The artist Hermann Bigelmayr, for example, set up the work of art Three Straightening Stems as part of the Federal Garden Show 2005 in Munich near Blutenburg Castle. The Swiss artist Bruno Gasser has been working on the subject of grass since the 1970s. Claude Simon published the novel " Das Gras " in 1958 .