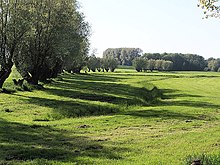 As a meadow in the narrower sense is agricultural grassland designated that as opposed to pasture not by grazing animals, but by mowing for the production of hay or grass silage is used and maintained. In a broader sense, meadow generally refers to a grassy , “mostly larger” area.

The meadow habitat can provide a home for many animal and plant species, depending on how it is managed. The species composition differs greatly depending on management and location. With regular mowing (mowing), bushes and subsequent forest formation are prevented. Meadows, like pastures, are a habitat that has been created and maintained by man for several millennia. One speaks therefore of a semi-cultural formation .

The selection pressure of mowing favors plants that can cope well with the frequent cutting and the high light irradiation, including many grasses . Due to the regular mowing, perennial plants (perennial, perennials) are preferred over annual plants . They survive the winter and reproduce vegetatively. Their seeds are usually light germs .

Certain plants, such as thistles, are absent from the meadows, while cattle avoid them on pastures and are not affected by the cut. The diversity of species on a meadow is largely determined by the frequency of mowing.

Of course, under today's conditions in Central Europe, meadows would no longer emerge and be preserved. Nevertheless, they show similarities with steppes and forest steppes, with alpine meadows and lawns as well as with poor meadows or dry grasslands , which are sometimes also referred to as meadows in the vernacular, as they mainly consist of herbaceous plants such as sweet grasses . 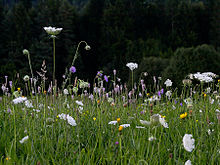 Insight into a mountain meadow

The involvement of underground burrowing vertebrates causes a change in the soil. Burrowing animals have an elongated physique and short, water-repellent hair. With powerful grave shovels they dig through the ground such as B. the mole. The tunnels of the mole and the mice damage the root system of low-lying grasses. Rummaging makes the meadow more varied. The high field mouse population attracts day and nocturnal predators, such as birds (kestrel, buzzard) and mammals (weasel, fox).

Living conditions: The all-dominant mowing dictates the boundary conditions for animal life. When mowing with conditioners , most of the insects in the cuttings are killed. The nutrient-rich young plants that grow up during the regeneration of the green stock after a mowing favor some herbivorous insects, such as bed bugs . Insects that visit flowers (such as butterflies or wild bees ), insects that live in parts of plants (or hibernate in them) or those that rely on a sufficiently thick layer of litter cannot persist unless there are temporarily uncut areas. Such areas, which change spatially with each mowing, are a very simple means of promoting biological diversity in meadows. In contrast, soil dwellers find a habitat that suits them all year round.

On the one hand, you will see birds in meadows that are only looking for food in the meadow (e.g. blackbirds). On the other hand, there are many typical meadow breeders who are very skilled at building nests. For example the meadow pipit, which forms a well-hidden, hemispherical, hair-padded nest. Other meadow breeders are the whinchat , the skylark , the quail or the bunting .

In order to cope with the central location factor mowing, plants and animals have to adapt well. For example, they can grow quickly, bloom quickly and produce fruit between mowing passes. Others develop in such a way that they are fruiting just before the first mowing or only develop in the second high meadow. Meadow and willow plants were naturally accidentally adapted to these human conditions and have therefore persisted.

Only those plants that are well adapted to this constant mowing can hold their own on meadows and pastures. They must also be able to reproduce asexually, such as B. many grasses.

Many of the meadow plants that bloom conspicuously also show adaptations. For example, the dandelion forms seeds before the first mowing . Other plants initially only form leaf rosettes or creeping shoots and only grow after the first cut, but then immediately develop seeds ( wild carrot ).

The autumn crocus flowers after the second cut, but does not develop its seeds until the following year.