The plant family of the rush family (in Germany and partly in Switzerland and Liechtenstein common name) or cornice (common name in Austria) (Juncaceae) belongs to the order of the sweet grass (Poales). Most of the over 400 species belong to the two globally widespread ( cosmopolitan ) genera of the rushes or cornices ( Juncus ) and the grove ( Luzula ). 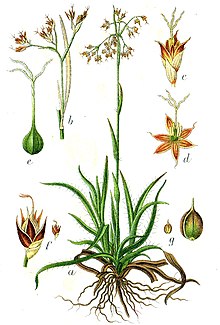 Deciduous, but also many wintergreen species are represented among the rush plants. Predominantly it is perennial herbaceous plants , few species are annuals . The genera of the family are very different in appearance. Their vegetative reproduction takes place in the majority via runners (rhizomes). Few species are clumpy . The species of the genus Distichia form compact pads.

The leaves are mostly basal and almost always three-lined, rarely two-lined (genus Distichia ). While the rushes have mostly round, often rigidly upright, stem-like and bare leaves in cross-section, the grove rushes usually have grass-like and often hairy leaf blades. The leaf blades are glabrous in most species (e.g. Juncus ), round or flattened round in cross-section. The stem-like leaves can be compactly filled with a white pith and divided into layers by transverse pith layers. The base of the shoot is often covered by leaf sheaths without spade. These are open at the rushes and often heard at the top in the transition to the Spreite. The leaf sheaths of the grove, however, are always closed. The leaf blades are flat, grass-like or at most runny. They are hairy at least in the area of ​​the vaginal opening.

The flowers of the rush family are in most cases hermaphroditic. The inflorescence of the rush family is a modified form of the panicle , namely a spirre . The marginal or lower flowers have the longest stalk, while the central or upper ones are more compressed. This creates an almost funnel-shaped structure. Several flowers can also be grouped in a cluster. 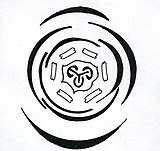 The basic structure of the small flowers is similar to those of the lily family (Liliaceae). The flower organs - six bloom cladding ( tepals ), six stamens (stamen) and three carpels (carpels) - are formed regularly and most complete. The bloom cladding sheets (perianth) are converted to husk-like scales. They are colored green to brown, purple or black, sometimes also transparent. The number of stamens is rarely reduced to three. The pollen grains are always aggregated in packets of four. The ovaries are always superordinate and end in three relatively long, papillary, often twisted scar branches .

The fruit type of the rush family is the three- to multi-seeded capsule fruit . In the rushes this is multi-seeded and divided into three parts by internal ribs (placentas). The capsules of the grove are single-compartment and have three seeds inside each at the base. While long white appendages ( elaiosomes ) are present at the end of the seeds of the grove , in the rushes there are only exceptionally membranous appendages .

The pollination occurs predominantly by the wind ( anemophily ) or insects ( Entomogamie ). In a few species, self-pollination is possible ( autogamy ).

The seeds are spread by the wind ( anemochory ), through the adherence of the fruits in the plumage or in the fur of animals ( epichory ). The spread of ants ( myrmecochory ) is predominant in the grove. The fatty appendages of the seeds serve as food for the ants. The seeds are carried into the ant burrows and transported to other places.

The Juncaceae family was established by Antoine Laurent de Jussieu .

The rush plants of the genera Juncus and Luzula are distributed worldwide in the temperate and arctic regions of both hemispheres . In the tropics , their occurrence is limited to the higher elevations of the mountains. The other genera occur exclusively in South America, Marsippospermum and Rostkovia also in New Zealand .

The Juncaceae family contains about seven genera with about 430 species.