This article describes the inflorescence. For the term in the roof construction, see wind panicle .

The botanical term panicle describes a richly branched inflorescence . Depending on the form, a distinction is made between the elongated panicle, the flattened umbrella panicle, the funnel-shaped spiral and the botryoid without side axes. 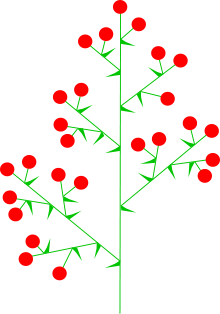 The panicle ( Panicula ) has along its major axis, the so-called rip , lateral axes, which are branched toward increasingly irregularly to the base and are covered with individual flowers. Like the main axis, the lateral axes are always closed with a terminal flower and are referred to as monads, diads or triads according to their number of flowers. If they are strongly branched like an independent panicle, one speaks of special panicle. Overall, this results in a conical shape.

The panicle is widespread as an inflorescence and can be found in castor , grapevines or oat and millet varieties . In the case of grapevines, the terms grape frame and black horse (Swiss) are also used.

By stretching the side branches and shortening the main axis, the conical appearance of the panicle gives way to a flat or slightly curved shape. This expression, in which all the flowers are on roughly the same level, is called umbrella panicle ( corymbus ) or ebony because of its characteristic shape , because of the similarity to another inflorescence, the umbel , sometimes also as an umbel panicle . There is a similar expression to the umbel-like shape in the umbrella cluster and umbel . 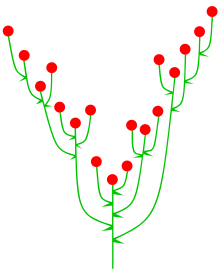 If the lower secondary axes are extended far beyond the upper ones and the shape is thus overstretched over that of the umbrella panicle, the result is a funnel-shaped appearance. This type is called spirre or funnel panicle ( anthela ) and it can be found next to the inflorescences of meadowsweet also on ledges and rushes .

If a panicle is depleted of branches, it looks like a grape ( botrys ), because of this similarity one speaks of a botryoid . Only a branched branch that may still be present and above all the terminal flower that is always present make it clear that there is no doubt about a form of panicle. With the loss of the terminal flower, the reduction from the richly branched panicle to the unbranched grape would ultimately be complete.