This article explains the umbel as an inflorescence type. Other meanings can be found under Umbel (disambiguation)

The botanical term umbel (from Middle High German tolde "top or crown of a plant") describes an inflorescence with a shortened main axis.

In the umbel , the main axis of the inflorescence is shortened, so that all flower-bearing minor axes start together at the tip of the stem axis . The secondary axes are usually roughly the same length, so that the flowers and later the fruits are at the same height. The end of the tip of the shoot, at which the flower stalks branch, is partially surrounded by a wreath of bracts , this phenomenon is called the involucre or simply envelope. The plants with umbellate flowers include, for example, the Araliaceae , with ivy as a well-known species, and the swan flower also has golden inflorescences.

Outwardly similar, other inflorescences such as umbrella cluster , umbrella panicle and umbel appear . The side axes are branched differently, but also result in a more or less uniform umbrella of flowers, so that they initially look like a real umbel and are collectively referred to as false umbels. 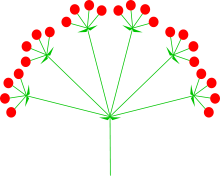 If there are no flowers emerging from the side branches, but rather additional umbels, so-called umbels or umbels of the second order, one speaks of a double umbel or compound umbel. The döldchen can also have a shell, then called a shell. The umbelliferae , which include such well-known species as carrot , celery and dill , usually do not have single umbels, but mostly double umbels.

In the case of hops , the female inflorescences are also known colloquially as umbels, although they are ears .