The term cones ( strobilus ) is not used uniformly in botany. The English-language online lexicon memidex z. B. lists a number of different definitions that are not congruent. Usually the male and female reproductive organs of the conifers are called cones . They are homologous to the inflorescences of angiosperms . 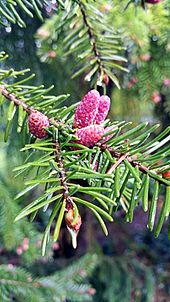 If we define pins as female spike-like inflorescences, the axis and bracts become woody when ripe, the economic territory comprises only the female cones and all their stages of development up to the woody cones with the mature seeds, whether the characteristic shape of the pine - and spruce cones have or round like those of the cypress and false cypress . Units are always composed of an outer scale and a seed scale with ovules, often spirally, but also differently, arranged around an axis, whereby the outer and seed scale can be grown together to different degrees and the outer scale can be greatly reduced until maturity. The cover scales are derived from bracts, the seed scales are converted short shoots and correspond to flowers. So the female cone is an inflorescence. The ovule integuments develop into a hard seed coat in most families.

Although the male flowers are more simply built, never lignified and fall off after flowering, they are usually also referred to as cones. Male cones consist of scale-shaped microsporophylls arranged in a spiral around the axis , which release pollen when ripe.

The cones sit in different ways on the branches of the various conifer species. In the fir , the female cones stand upright, in the spruce they hang, in the black pine they stand horizontally from the branches. Some female cones, such as those of the fir, fall apart when the seeds are ripe, so that no whole pine cones can be found on the ground. In other softwoods, the female cones fall from the tree as a whole, such as in the spruce and pine . Before this, these cones open their scales on the tree to release the winged seeds. In many coniferous plants, the cover scales open in dry weather and close again in higher humidity.

Female cones of a juniper

In some conifers, the cones are very heavily modified, e.g. B. the "berries" of the juniper , in which you can still see the scales when unripe, but no longer when ripe. The top three scale leaves become fleshy when ripe and form the juniper berry (berry cones).

In the case of the yew and nut slices , only a few small scales and one or two ovules or a seed are left of the cones and the seed is covered by a fleshy aril. Because the female structures are most likely based on a cone structure with cover and seed scales, these structures are also often called cones. The male flowers have the same basic structure as the other conifers, even if the stamens have special features.

Cones of the cycad Encephalartos ferox

Be referred to as a pin and the male and female flowers and seed pods of the cycads , which are arranged in spirally about an axis more or less flaky stamens (Mikrosporophyllen) or "carpels" (Megasporophyllen) are made. They can look very similar to typical conifer cones and sometimes become huge and heavy. "A female cone of Lepidozamia peroffskyana (Syn.: Makrozamia denisonii ) was 94 cm long and weighed 38 kg, one of Encephalartos caffer's even 42 kg."

If one proceeds purely formally from the definition of cones in common identification books, according to which cones are ears of corn, the axis and bracts of which become lignified when ripe, then the alder trusses fall under this term, but the male flowers of the conifers do not. However, the alders are more covered and their cones have nothing in common with those of the conifers apart from their shape and lignification. Nevertheless, they are often referred to as cones, but some authors speak of cone-like or cone -like inflorescences that arise from kitten-like inflorescences.

cone-shaped fruit cluster of the hops

According to an even broader definition, cones are infructescence with overlapping, scale-like bracts. In this case, the hop fruit stands would also have to be called cones. In English and French these are actually called cones (hop cone, cone), in German they are called hop umbels.

The sporophyll levels of horsetail (Equisetaceae) and bear moss ( Lycopodium )

Last but not least, the term cones is also used for the cone-like arrangement of the sporophylls on the ends of the shoots of horsetail and bear moss , e.g. B. in English and in French. In German they were called flowers in the past and now mostly correctly called sporophyll stands.

The stone pine is the symbol of Augsburg's coat of arms