Dill , dill or borage , even dill and dill fennel called ( Anethum graveolens ) is the only species of the monotypic genus Anethum and belongs to the family of Umbelliferae (Apiaceae). It originally comes from the Middle East, but is grown worldwide today. Dill is one of the most widely grown spices in the German-speaking area . 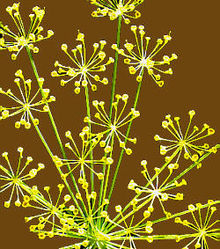 Section of a double-ended inflorescence

Small dome with flowers in detail

The lower leaves in particular are three to four times pinnate, finely divided into bristle sections. The upper leaves are less divided and smaller. Stipules are missing. The leaf sheaths are 1 to 2 centimeters long and horned at the top.

Two carpels have become an under constant ovary grown, and some of the elongated shaped compressed. The two styluses are short. The flower has a nectar-secreting disc and is pollinated by various insects, especially beetles. The flowering period extends from partly as early as May, but mostly from June to August.

The egg-shaped, brown, dry cleft fruits ( double achenes ) are 3 to 5 millimeters long, 1.8 to 2.5 millimeters wide and 0.6 to 0.8 millimeters thick. The thousand grain mass is between 1 and 2 g. They disintegrate into two narrow-winged partial fruits with gray-white longitudinal ribs. The fruits usually ripen between July and September. As wing fliers, they are spread over the wind, and also as adhesives when wet.

The dill is originally widespread in the Middle East. According to R. Hand, however, it originally occurs in Morocco, Algeria, Tunisia, Spain, Portugal, Croatia, Bulgaria, Cyprus and Turkey. The originality is doubtful for Albania and Mallorca. In Central Europe it is seldom found wild.

Within the species Anethum graveolens three clans are distinguished, which are classified partly as varieties, partly as subspecies:

Most of the diseases and pests that appear on dill are typical of umbelliferous plants such as carrots, parsley, and celery.

Sprouting is the biggest problem with germination . It is caused by several fungi, especially Pythium sp. The most economically important fungus during the rest of the cultivation period is the fusarium ( Fusarium culmorum ). It destroys young stocks and damages plants even after flowering. If it occurs, it requires a change of location of the crops. However, the Fusarium fungus is not solely responsible for the wilt. Leaf drought ( Itersonilia perplexans ) is less common. Leaf spots also cause Mycosphaerella anethi , which is known from fennel, Phoma complanata , Ascochyta anethicola . Erysiphaceae (powdery mildew) ( Erysiphe heraclei ), rust fungi are of no economic importance for dill.

Double umbels from above with the yellow flowers

Dill is grown outdoors as well as in a greenhouse. The cultivation in the greenhouse takes place in the soil and in growing media in pots. Soil-free cultivation is also possible, but until today seldom except for sprouts. Depending on the planned use, a distinction is made between cultivation for fresh market, industrial goods and medicinal plant cultivation. Fresh produce comes from the cultivation of bundles and pots . In German-speaking countries, the majority of bundled goods comes from outdoor production and potted goods almost exclusively from the greenhouse. The bulk goods for industrial processing are grown over a large area and are highly mechanized. The cultivation for grain production and that in medicinal plant cultivation for herb drug production also comes from large-scale outdoor cultivation . Garden dill is not very demanding with regard to the soil, it only does not tolerate compacted soils and waterlogging. Medium-heavy, moist, warm soils with a high proportion of humus, for example fens, are ideal. PH values ​​between 7 and 7.6 are optimal. From a climatic point of view, it can be grown anywhere in Europe. In the open field, no-till is predominant; precultivation in peat pots is also widespread for early cultivation in the field. Long days in the summer months promote flower formation, which is why dill is grown in southern countries mainly in winter and spring. Dill is a dark germ. Other sources say about the sowing depth that dill is a light germ: "Press the seeds on, do not cover with soil". Dill is also a cold germ: a cold treatment of about 7 days at 5–10 ° C is beneficial for germination. Dill takes about three weeks to germinate. The optimal germination temperature is between 10 and 30 ° C. Dill develops slowly when young and is therefore sensitive to weed growth because the soil remains open for a long time. If, according to the climatic water balance, additional irrigation is used, the fresh yield can be significantly increased. The nutrient requirement of the culture for 30 t fresh mass yield per hectare is 65 kg N, 25 kg P 2 O 5 , 200 kg K 2 O, 10 kg MgO and 85 kg CaO per hectare as pure nutrients . From this, the soil reserve and known nutrient replenishment is withdrawn from the soil for fertilization. In protected cultivation under glass, where CO 2 fertilization is possible, levels of 800 to 1200 ppm are aimed for in the culture area. Enrichment takes place from sulfur-free exhaust gases from the gas heating system or with technical CO 2 . The cultivation period is six to seven weeks from March and is extended to up to nine weeks in autumn until December sowing.

With regard to the crop rotation , a break of four years must be observed after dill or other umbelliferous plants before another dill cultivation. The reason is particularly fusariosis . Previous crops with organic fertilization are cheap, especially root crops . Dill removes a lot of potassium and relatively little phosphorus from the soil. However, a good supply of phosphorus is important, as a lack of phosphorus has a strong effect on growth.

For the fresh market, dill tips 15 to 25 centimeters in length are mainly harvested. For industrial goods, the cut lengths are 30 to 35 centimeters (vegetable drying industry) or 40 to 60 centimeters (pickle processing). By staggered cultivation with several successive sowings, the harvest takes place continuously from the end of May to October. The yield of dill herb is between 15 and 30 tons per hectare and year, that of dill tips between 10 and 18 tons per hectare and year. Fresh produce is mostly harvested by hand, cabbage for drying and freeze preservation is mostly by machine. Grain dill is harvested before it is fully ripe, usually in late August / early September. The yield is between 0.8 and 1.2 tons per hectare and year.

The propagation takes place generatively. The seeds are harvested when the seeds of the umbels begin to turn brown. Then they are ripened and dried. Individual seed carriers remain in the house garden, and they seed themselves and produce the seeds for the next year in the same place. Harvested seeds can germinate for more than two to three years with a moisture content below ten percent. Vegetative propagation is only used in breeding.

Dill is best stored after cooling down quickly in a temperature range of −1 to 0 ° C and a relative humidity of 95%. If dill is also wrapped in foil, it will keep for two to three weeks.

There are several types of dill that can be traced back to four groups of origin: normal diploid clans, mammoth types, tetraploid clans and types from the drug trade. For the large-scale cultivation of dill tips, the varieties "Sari" and "Vierling" have proven themselves.

Garden dill is a versatile herb . It is used for salads. Dill is popular in sauces based on salad oil, yoghurt, quark and in seasoned butter and is suitable as a spread. It is also used to season fish and meat dishes. The dill oil is also enriched for the liqueur industry by distillation. Fresh and dried, it can also be used for canning and herbal essences. Leaves like flower umbels are an important seasoning for pickled cucumbers , especially salt and dill cucumbers. Usually the dill tips are used fresh, dried, frozen or freeze-dried. The dill herb (the young herb) or the whole above-ground plant is used less often. The fresh dill has the best taste and is also sprinkled on cooked potatoes.

Applications: Dill fruits have moderately digestive, gas inducing and antispasmodic properties. Today they are still mainly used in folk medicine like caraway, but with a weaker effect, for digestive disorders with bloating and flatulence (gas) and the resulting colic as well as for slight cramp-like complaints in the gastrointestinal area. Dill can be used for cramping abdominal pain in children and stimulates the flow of breast milk . Chewing the seeds banishes bad breath .

For the dill fruits, progesterone-promoting effects were proven in the experiment, which makes the occasionally described application in menstrual disorders and infertility at least plausible. However, data from clinical studies are not available.

In the Ebers papyrus, dill is recommended for headaches and to soften blood vessels. Even before Hippocrates it was considered to soften stools and cleanse the uterus. According to Dioskurides , it helps with stomach ache, vomiting and flatulence, urinates and milk secretion, but is said to damage eyesight over the long term. Hildegard von Bingen prescribed the herb for lung infections, externally for nosebleeds, Paracelsus as a diuretic or the oil of the seeds as a carminative, stomachic, galactogogum, for vomiting, bad breath, sinusitis, hemorrhoids and condylomas (genital warts). Mattioli recommends it as a steam bath for uterine pain, genital ulcers and umbilical hernias. Von Haller also praises him for uterine problems, Leclerc his prompt effect on hiccups and vomiting. According to von Grot, it has a constipating effect, but as a suppository it is laxative. According to Madaus, dill used to be used in pharmacies against vomiting, hiccups and pelvic cramps. Folk medicine also retained its use for sleep and milk stimulation and for flatulence in children. According to popular belief, he drove away demons and was supposed to help the bride to rule in marriage ("I have mustard and dill, man, when I talk you are silent."). In a fairy tale based on Jenny von Droste-Hülshoff, dill protects against hexes. The dill water made from the seeds has a digestive effect; the fruits were chewed against bad breath , the tea infusion of the leaves of the dill herb helps with stomach cramps and indigestion.

Dill was already cultivated as a cultivated plant in ancient Egypt and used as a medicinal and aromatic plant. Pharaoh Amenophis II settled in 1400 BC. Place dill in the grave. Also Mt 23,23  EU mentioned dill. It was also used as a herb in ancient Greece and Rome.

Dill spread from the eastern Mediterranean towards the Atlantic more than 5000 years ago. Its use in food preparation was dated for about 3600 BC. Proven in the western Alps.

In the Middle Ages, dill (from Middle High German tille ) was widely used as a medicinal plant for various ailments. The dill probably came to Central and Northern Europe through monks who planted it in their monastery gardens. In the Capitulare de villis of Charlemagne , dill is listed as anetum .