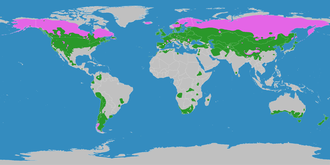 The temperate zone on both hemispheres is the climatic zone that lies between the subtropics (annual mean temperature above 20  ° C ) and the cold zone (mean temperature below 10 ° C in the warmest month). One also speaks of the moderate latitudes or the moderate climate .

The temperate zone corresponds geomathematically to the term middle latitudes - in each case between the tropics at 23 ° 27 ' latitude and the polar circles at 66 ° 34' north or south. This term is also applied to other celestial bodies in planetology .

The temperate zone is divided into the cool temperate (nemoral) zone and the cold temperate (boreal) zone . In some publications, the Mediterranean climate can also be found as a warm temperate zone , which is otherwise assigned to the subtropics. In addition, the so-called warm - temperate rainy climates of the Köppen and Geiger climate classification with the sea ​​climates Cfb and Cwb extend into the cool-temperate zone . There is a risk of confusion between climatic zones and climates .

The vegetation in the temperate zone consists mainly of coniferous , mixed and deciduous forests . In the interior of the continents there are also steppes and deserts (semi-deserts and full deserts).

The rainfall in the oceanic areas balanced throughout the year and take to the continental areas back from.