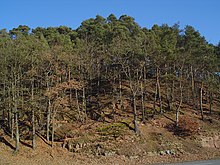 Autumn in the mixed forest

Mixed forest is a mostly colloquial term that describes forests in which several tree species z. B. deciduous and coniferous trees occur together. From an ecological point of view, the prerequisite is that each tree species is sufficiently available to assume a species-specific role in the ecosystem. The timber device speaks of mixing stocks , once the admixture is at least 5% of the area. Smaller admixtures are regarded as ecologically insignificant and are therefore not taken into account.

In forest science and vegetation science , the term mixed forest is only used very rarely without further additions. Instead, more precise terms such as pedunculate oak-hornbeam-forest or alder-ash-alluvial forest are used. However, the expression mountain mixed forest, for mixed forests of spruce, fir and red beech, often with the participation of other species, is common in the montane altitude range of the southern German low mountain range and the Alps.

The term mixing was used as a contrast to the pure stand. No distinction is made here between deciduous and coniferous trees.